Kumar Sangakkara is famous for his excessive appealing and also has the habit of getting cheeky too often.

Sri Lankan wicket-keeper Kumar Sangakkara is famous for his excessive appealing and also has the habit of getting cheeky too often.

During the Sri Lanka tour of United Arab Emirates (UAE) in 2013-14 to play against Pakistan, Sangakkara was at his best again. In the second One-Day International (ODI) in Dubai, Pakistan were batting first. They were 157 for one in the 35th over with Ahmed Shehzad batting at 80 with Mohammad Hafeez.

Spinner Seekkuge Prasanna bowled a delivery, which was going towards the leg-stump; Shehzad played it over the short cover fielder and called for two. The throw came at Shehzad’s end and on his second run, Shehzad for a moment felt that he had misjudged the two. Sangakkara seemed to have collected the ball, trying to remove the bails. Fearing run out Shehzad dived desperately only to to see the ball arrive much later.

Sangakkara had faked the take and stood their smiling mischievously, having fooled the Pakistani batsman. Shehzad surely didn’t find it funny but managed to see the lighter side of it. He had a small chat with the Sri Lankan wicket-keeper, before the Pakistani physiotherapist came rushing in, with spray and tape to attend his injury that he sustained after diving. The batsman went on to score 124 in the end but Pakistan lost the match by two wickets, with Sangakkara top-scoring for Sri Lanka with 58. 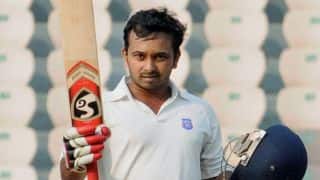