Kumar Sangakkara’s innings of 169 against South Africa was a knock of sheer class although there were numerous innovations on show. Nishad Pai Vaidya suggests that Sangakkara may have shown that there can be a touch of class to innovation in the contemporary game. 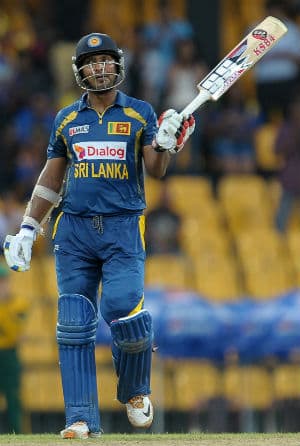 Kumar Sangakkara’s innings of 169 against South Africa was a knock of sheer class although there were numerous innovations on show. Nishad Pai Vaidya suggests that Sangakkara may have shown that there can be a touch of class to innovation in the contemporary game.

A complete batsman in the modern era should have the ability to assert his dominance in any format. He must have this knack of adjusting to the pace of the game and tuning his approach accordingly — be it Tests or even T20 cricket. Kumar Sangakkara is one of the few batsmen who fit the bill perfectly. The southpaw is a class act irrespective of the format. His latest innings of 169 is proof of his unique ability as a batsman.

Sangakkara’s effort against South Africa in the first One-Day International (ODI) presented all the different shades to his batting. He started off cautiously and took his time in the middle — surveying the conditions and building a platform for a later charge. Once he had his eye in, he unleashed an array of extravagant strokes, which were essayed to perfection. The South African bowlers may not have bowled too badly, but Sangakkara was in sublime touch and was ready to tackle any delivery.

This is Sangakkara’s second 100 since the beginning of June and the interesting thing is that they have come in contrasting situations. The knock of 134 not out came against England in a crucial league game at the ICC Champions Trophy 2013 last month. Chasing 294, Sri Lanka and England were involved in a battle of wits as Sangakkara anchored the latter’s run-chase. With wickets falling, he had to play a more sensible hand and allow someone like a Nuwan Kulasekara to take the attack to the opposition.

A month down the line, Sangakkara showed that he can play the dominant hand as well. His first 66 runs came off 91 balls and he nonchalantly shifted gears from thereon. The next 103 runs came off only 46 balls. The most interesting aspect was the way he blended into the hitting role. He was untroubled by the challenge posed by the South African bowlers and had an answer to everything. However, the thing that stands out is the way he maintained his balance at the crease during the latter half of his innings.

Once Sangakkara got into his groove, he was moving around the crease and targeting the uncanny areas around the park. One would normally associate a classical cover-drive with Sangakkara — the glorious sight where he would get down on one knee and middle the ball, which would lace right across the park. That class and finesse is what Sangakkara is all about, but he did show that he could innovate. Even when he shaped to scoop a few over fine-leg, he was incredibly balanced and the head was still — something that is the key to effective execution.

Sangakkara was ready to make room and loft the ball over the covers. With the field inside, he was able to exploit that area and milk runs. Even when the bowlers pitched it short, he was in a position to pull it across the line and send it to the boundaries on the leg-side. Although there was an aggressive intent, one could see that the trademark silken touch was still prevalent. Even though he was moving across the crease, there was a touch of class and he essayed strokes with delicate perfection.

If one looks at Sangakkara’s record in all the formats, one would find that he maintains high standards in all of them. In Test cricket, he is very prolific and has already amassed over 10,000 runs at an average of 56.98. In ODIs he has another 10,000 odd runs at 39.70. That average is the highest for any Sri Lankan batsman in ODIs — ahead of batsmen like Sanath Jayasuriya, Aravinda de Silva, Mahela Jayawardene, Tillakaratne Dilshan and Marvan Attapatu. In the shortest form of the game, Sangakara scores at a fairly good clip and has a decent average.

At the age of 35, Sangakkara is as fit as ever. Age is a number after all and his performances are evidence of that. In the past, numerous batsmen have stumbled upon a renaissance in the late 30s. If Sangakkara’s current form is anything to go by, we may be in for more sterling shows in the future.