Kumar Sangakkara’s 192 against Australia in Hobart: An aberration in a 15-year career of placid culling of

The left-hander single-handedly steered his team to have a peep at chasing a mammoth total, in 2007.

Kumar Sangakkara displayed an awe-inspiring brand of attack against a powerful bowling attack of Australia in 2007, a knock among the more special ones from his collection. Abhishek Mukherjee revisits the effort.

What resonates from Kumar Sangakkara’s 15-year presence on television showing international cricket is the idealism he proffers on and off the field, like the all-round student in school who will have neither the teachers nor classmates complaining. It takes a lot of effort to do such justice to personal and professional lives. Be it his batting, his dedication towards his team and teammates, his spoken thoughts and interviews to the media, or his role as global cricket brand ambassador and that of Sri Lanka’s cricket, he does not disappoint anyone.

But to this end, he leaves room for a pugnacious assault studded among his 38 robot-like hundreds that garners attention due to its deviance from routine. That knock at Hobart against Australia in 2007 made him look superhuman among mortals and not a well-oiled run machine he usually is, as he dealt with a sharp attack of Brett Lee, Mitchell Johnson, Stuart Clarke and Stuart MacGill to take Sri Lanka close to their chase of a mammoth 507. READ: Kumar Sangakkara — one of the very best ever

He arrived at the wicket at the departure of Michael Vandort early in the innings, and stayed for more than 96 overs to shepherd his team towards uncharted territory. They eventually folded for 410, the highest fourth-innings total by Sri Lanka, to lose by 96 runs, after Sangakkara had left his imprint in an astonishing 192 that ended only by an umpiring error.

His first boundary, a flick off Brett Lee to deep square-leg, was suggestive of the fluency he brought to the middle. The wicket, to be fair, produced little swing or seam movement, but generated pace and  bounce nonetheless. He sensed this and cracked Mitchell Johnson, who bowled about as fast as Lee, for a boundary towards deep midwicket; the ball was authoritatively dispatched off a swivelled pull as fast as it was delivered to Sangakkara. VIDEO: Best of Kumar Sangakkara, 192 against Australia at Hobart

All this he was seemingly doing out of a need to attack against attacking bowling in attacking fields. He was especially severe against Stuart MacGill, against whom he took 49 in 53 balls, hitting eight fours. The first among those boundaries was a slam through extra-cover off a full toss, and the next, a hard sweep to deep midwicket. He, then, smashed MacGill straight down the ground, before stepping down the track — a repetitive approach to the bowler — to drive a full toss through extra-cover. He stepped out twice more to slog a ball powerfully through deep midwicket, and another through extra-cover. He brought up his century by depositing a high full toss straight down the ground. The final boundary off MacGill was also off a full toss, but this time, Sangakkara chose to pull him.

There would be a marathon assault on other bowlers as well, as if endless highlights on television were on one end, with other batsmen merely there to witness it. He inside-edged Johnson past the wicketkeeper to collect the rare streaky boundary, and made up that error in judgment by going down on one knee to put away a full ball, not over-pitched, from the bowler in a typically flamboyant manner. He displayed control by softly placing a defensive steer to the third man boundary off the disciplined Stuart Clark, and then square-driving him confidently.

A 142 kph delivery from Johnson was cut fiercely to point, but another attempt to do the same ended in the second and final Chinese cut.

Around this time, he started conjuring attacks of a more awe-inspiring quality, to build his innings, and Sri Lanka’s chase, to a crescendo. Without any footwork he steered Clark towards gully nonchalantly. He waited for another Clark delivery, got one leg out of the way and placed him to the point boundary. Then he lofted a full ball from the same bowler over the infield on the off side to get to 150. READ: Kumar Sangakkara’s final battle at Galle

He executed another fierce loft in the same direction. This was remarkable given the new ball had by then been taken, and Sangakkara had no inclination to pause his assault or exercise caution. As he himself said a few years later, everything was coming off for him that day.

He sweetly timed a 140.3 kph ball from Johnson to the backward point boundary without any footwork; he repeated it soon, placing the ball finer this time. For his final boundary off the bowler, he played a loft towards extra-cover.

A step-up in pace refused to deter him, as he waited for a 147.6 kph ball from Lee, got inside its line — it was bowled on leg — and cut to a gap in gully. This, among all, was probably the most astonishing shot. The pace of the ball, it seemed, was not a factor. A short ball from Lee, at 146 kph, was glanced off the hip to fine leg for another four.

He played a nicely placed hook to Clark’s short ball, but looking to repeat the shot off another ball from the bowler, he completed the shot too early, perhaps bored by Clark’s relative lack of pace. The ball struck his shoulder, climbed up to his helmet, and lobbed to Ricky Ponting in the slips. He trudged back in disappointment as the umpire gave him out.

Sri Lanka lost by 96 runs. The assault by Sangakkara was reminiscent of Nathan Astle’s similarly one-man-army attack against England in 2002. New Zealand, chasing 550 for a win, had scored 451, led by the fastest double-century in Tests by Astle, a record that still holds.

In terms of impact, Sangakkara’s 192 is the easiest to differentiate from the rest, however clinical his other knocks may be. 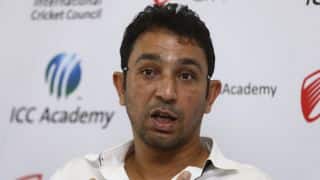