Nizakat Khan and Kumar Sangakkara won the Man of the Match (final) and Man of the Tournament respectively.

Darren Sammy sports the customary smile and jogs in with his customary style to deliver the last ball of Hong Kong T20 Blitz 2018. James Frankiln lofts it over mid-wicket for a massive six. Players of Hung Hom Jaguars care little about the ball. They sprint towards Sammy as if the one who gives the first embrace will take a prize. The owners and the crowd follow suit.

Sammy s hands are up. Never a bowler has been seen so elated after being hit for a massive six. But Sammy has added another T20 trophy to his kitty.

He defended 22 off the final over as Jaguars trounced Galaxy Gladiators Lantau by six runs.

Kinchit Shah is a Mumbai-born Hong Kong cricketer. The 22-year-old has played 7 ODIs and 15 T20Is for Hong Kong, and has done little of note. He captains the Jaguars that has notable leaders in Sammy and Johan Botha. Well, perhaps these are the perks if your father owns the side. His younger brother Ninad too plays for the franchise. Opening for Jaguars, Kinchit had managed 110 runs at 22 in the tournament. He has done little of note barring a 51-ball 65 against Hong Kong Island United. Kumar Sangakkara was entertaining the full house at Mong Kokand, but Gladiators were running away with the game. A touch of grace to the brute of power-hitting defined Sanga s batting.

Gladiators needed 68 off 36 balls when Kinchit, a part-time off-spinner, brought himself on. Sanga was batting on 75 off 45 balls, and had hit the more reputed bowlers for a total of seven sixes. Kinchit gave away three singles and then lured Sanga to hoist one over long-off. The edge found Sammy and that was it.

HUGE WICKET. In the battle of the captains @JDJaguarsKinchit Shah dismisses @GGLantau@KumarSanga2.#HKT20Blitz

But before that, Sanga was running the show

So what was Kinchit thinking before he brought himself on? With two left-handers at crease (Sangakkara and Devcich) and ball turning away (as I bowl off-spin), there was grip and turn available on the surface so I decided to pitch as short as possible. And then I could sense that Sangakkara was waiting at the crease for me and decided to pitch one up. He over hit it which caused the top-edge and a wicket there, said Kinchit after lifting the trophy.

Leading a side that has Sammy, two-time world champion and Botha, a man renowned for his leadership around the world, does the 22-year-old make all decisions? Generally decisions like bowling changes, I make them on my own. But I sometimes get the experience of Ben (Laughlin), Darren (Sammy) and Johan (Botha). They have played a lot of cricket for their country. They come up to me and give me suggestions, added Kinchit, who is in the reserves for Hong Kong in the upcoming ICC World Cup Qualifiers. Kinchit has certainly managed to rise above notions of credibility, as he now has captained the Jaguars to Hong Kong s premier cricket tournament. It is an amazing feeling to win, this is the best tournament in Hong Kong and to win it, it s something that still sinking in, he further added.

The league game between the two saw 450 runs being scored. Sanga felt his bowlers had done well to restrict Jaguars to 200, and it was losing the momentum after 14th over that cost them a win. We knew it would be a tough final and I think we did well to restrict them to 200 after their good start.But there was not enough impetus from us towards the end, at around the 14th or 15th over and we didn t get enough runs, said Sanga, who won the Man of the Tournament award for slamming 311 runs from five innings at 77.75 and got them at a strike rate of 174.

So what happened to the ball that got him? They had to go for their left-armer (Nadeem Ahmed) or right-arm off-break, they went in with the latter. They had to gamble and sometimes it works, Sanga added.

Lost in the vertical mazes of Hong Kong, I completed a couple of circles near Central in attempt to locate the venue for the pre-event party, where I was invited by Cricket Hong Kong.

Lucky for me that I bumped into two gentlemen, Hong Kong internationals, Nadeem Ahmed and Nizakat Khan, who were extremely kind enough to help me out. The glitz of blitz had the Sangas and Smiths and Sammys all over, and little I could fathom that I was walking beside someone who would be the Man of the Match in the tournament final.

Nizakat had three failures and a 48 from four games before this. He ensured that the final was about him. The Pakistan-born Hong Kong cricketer blasted eight fours and six sixes in an innings of 93 off 52 balls that set the tempo for the champions.

It was a pressure game as it was final and with Sangakkara in top form. I had a quiet tournament and 48 was my best effort, said Nizakat. I wanted to do well in the final and help us win the trophy. It was such a great experience playing with and against legends such as Sangakkara, Darren Sammy and others. I have learned a lot and feel lucky. Hopefully this kind of success will help me in my career.

Man of the Match: Nizakat Khan

Man of the Tournament: Kumar Sangakkara 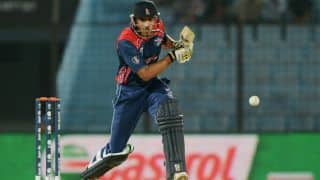