Sangakkara had his fare share of luck throughout his innings by getting dropped twice.

Sri Lanka’s star wicket-keeper batsman Kumar Sangakkara hit his tenth double ton, taking him close to Don Bradman’s record and helping his team reach a total of 533 with a healthy lead over Pakistan. Amit Banerjee analyses the impeccable knock which lasted for more than 11 hours.

The second and the third day of the first Test between Sri Lanka and Pakistan at Galle belonged to the hosts. And to be specific, it was their charismatic wicket-keeper and former captain, Kumar Sangakkara with who dominated the day’s proceedings with the bat and smashed a scintillating knock of 221, his tenth double ton, to guide the Lankans to an imposing total of 533 for the loss of nine wickets with a lead of 82 runs.

Pakistan had folded up at a challenging total of 451, presenting the hosts an uphill task if they were to gain a lead and produce a favourable result in the match. The Sri Lankans lost opener Upul Tharanga early with a mere 24 runs on the board. In came the old stalwart in the form of Kumar Sangakkara, who had scored six fifties and a century in his last 12 innings. Sangakkara had the responsibility of nurturing crucial partnerships with the top order batsmen in order to take Sri Lanka past the visitor’s total.

What followed was pure class from the elegant left-hander. Sanga, as he is known amongst his team mates, thwarted the Pakistani attack over three days with patience and grit. The pitch was turning and were great conditions for Saeed Ajmal to hunt at. Unfortunately for him, Sangakkara was in a similar mood, who looked to exploit the Galle flat track, which is known to be a batsman’s paradise.

Sangakkara helped his side overcome Pakistan’s total with just three century partnerships, which were put up  with Kausal Silva, Mahela Jayawardene and skipper Angelo Mathews. The flow of runs that came from his bat included 24 boundaries, with a strong inclination towards the covers where he scored seven boundaries. The wicket-keeper batsman stayed at the crease for more than eleven hours to notch up his seventh highest career score.

Sangakkara  had his fare share of luck throughout his innings by getting dropped twice. Batting at 102, he sliced an outswinger by Junaid Khan towards Abdur Rehman, who failed to collect it in spite of getting ample time to prepare for the catch. In the second life-threatening moment, Ajmal almost got the better of him when the latter edged the ball towards the slips, only for Younis Khan to fumble. Sangakkara ensured the Pakistanis paid for their mistakes dearly by piling runs in a heap on them.

His dismissal came in the final session of the day at the 159th over when he got foxed by an Abdur Rehman delivery which he tried to smash by charging down the pitch, only to completely miss and get the bails removed by the keeper. Though disappointed, his work was more or less done as the hosts already had a decent lead. Sri Lanka, being in the driver’s seat at the moment, will look forward to taking wickets at regular intervals on the fourth day, with a special focus on Younis Khan, who scored a century in the first innings. Sangakkara is now at par with Sir Donald Bradman in terms of 150 plus scores and is two double centuries away from breaking the Don’s record of highest number of double tons in international cricket. 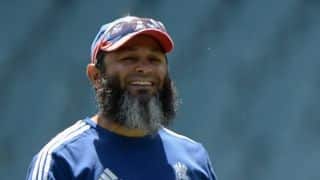