John Wright called Lakshmipathy Balaji The Black Bradman . Girls went into superlatives over his cute face and unique name and friendship bands he wears on his hands.

I had always wanted Lakshmipathy Balaji to play more cricket more than the 8 Tests, 30 ODIs, and 5 T20Is Indian selectors gave him. It was not that he had outstanding numbers at the highest level (though he had his moments). A stress fracture virtually ended his international career in 2005. He did make a brief comeback (at the expense of an injured Munaf Patel) in 2009. With T20 cricket coming into vogue, he was even recalled for World T20, 2012. He did a decent job, but to be honest, he was too injury-prone to continue.

However, for a season, or more specifically, for two months, Balaji attained cult status in India and in Pakistan. He was not quick, certainly not quicker than the Pakistani fast bowlers. In the first Test he bowled second-change. In the other two he took new ball.

Despite not being fast he was nippy, and could skid the odd one through. He had an excellent leg-cutter that often pitched on leg-and-middle and aimed for the off-stump. When on song he could be vicious, but not on a consistent basis.

On a placid pitch at Rawalpindi (India amassed 600 for 9, Rahul Dravid stonewalled in extreme heat for a 12-hour 270) Balaji bowled his heart out, taking 4 for 63 and 3 for 108. Pakistan lost by an innings. It was India s first series win in the country.

Balaji did not take a five-for on that tour. His figures read 12 wickets at 31, acceptable for an Indian seamer but by no means excellent. In 5 ODIs on that tour his 6 wickets came at 45, and he went for 5.97 an over. Once again, by no means anything close to outstanding numbers.

But despite all that, despite Dravid and Virender Sehwag and Sachin Tendulkar s double-hundreds and triple-hundreds and controversial 194 not outs, despite Yuvraj Singh s dazzling ton and Anil Kumble s exceptional bowling, Balaji was the star attraction.

How popular was Balaji in Pakistan? When he patrolled the boundary line they used to sing Balaji zara dheere chalo (parody of a popular Hindi song; the translation is not necessary) from the stands, having his teammates in splits. Teenaged Pakistani boys and girls kept chanting his name, breaking it in syllables Ba-la-ji when he walked out to bat.

Consider this, for example. The series was levelled 2-2 when Balaji visited the Lahore University of Management Studies (LUMS) with Dravid, Parthiv Patel, and Irfan Pathan. The chant was there all right.

When Anand Vasu of ESPNCricinfo later visited the campus he had the shock of his life when Sajeda, a student, told him animatedly I was this close to Balaji. A confused Vasu asked himself, Surely you mean Sachin Tendulkar? Or Shahrukh Khan?

The Ba-la-ji chant continued at LUMS, making Balaji blush, if one goes by a Rediff report. During an interactive question-answer session they asked him what he liked most in Pakistan. The chant broke all decibel levels the moment he responded with the girls are pretty.

The girls got over-excited, going into superlatives over his cute face and unique name and friendship bands he wears on his hands. A bemused Balaji had to explain that the bands were religious…

It was not only the fair sex. He had his share of male fans too, who kept chanting his name, cheering everything he said, yelling in ecstasy when he fielded a ball, was asked to bowl, or walked out to bat.

Why was Balaji popular? Some say it was because of his batting. He finished that ODI series with a batting average of 45 and a strike rate of 161 (no typo there). Tendulkar praised his strokeplay. John Wright called him The Black Bradman . George Headley would probably not have minded.

Consider this. The ODI series is tied 2-2. India are batting first. Shoaib Akhtar steams in. Balaji stretches his left leg out and plonks him over long-on, into the stands.

Shoaib is not amused. He aims one at Balaji s leg. Balaji tries a remarkably ugly cross-batted hoick. The bat snaps in two. Balaji runs frantically, half a bat in hand, obviously taking longer than usual to reach the other end. By then Irfan is halfway through with his second run.

Balaji makes a frantic dive and somehow makes it with the half-bat. He gets up to his feet and grins innocently at Shoaib as if the proceedings over the past minute or so are among the commonest in cricket.

Two matches before that he had biffed his way to a 12-ball 21 not out, facing only Shoaib and Mohammad Sami (also express, mind you). In the match before that Tendulkar had set up a chase of 330 with a 135-ball 141. India were 284 for 8 with only Ashish Nehra in the pavilion, but who cared? Balaji and Ramesh Powar, polar opposites in physique, grinned their way to a stand of 30 in 15 balls including 6 boundaries.

Balaji drove and edged with panache throughout, but perhaps more significantly, grinned his way to glory at the drop of a hat. The man and his grin became so popular in Pakistan that BBC had to interview him, emphasising on the grin. I had a jaw surgery when I was young, was the prompt response.

He later admitted his popularity in Pakistan was embarrassing . Perhaps it was. But his never scaled the same heights again. And across the Wagah Border, the Indians were bowled over as well, for Balaji was as lovable as any Indian cricketer.

He was no Glenn McGrath, but was an honest trier who could pull off the occasional miracle. He was a delight to watch when he wielded the bat. He won many more hearts than Tendulkar and Dravid and Sourav Ganguly on a Pakistan tour by a magnetism that remains mysterious to most.

And above all, he grinned through it all. He grinned when he hit a six or was beaten or when he misfielded. He grinned when they queued up for him at hotel lobbies or on the roads of Lahore. Had there been Instagram back in 2004 we would have been able to share how broad his grin was (or how he blushed!).

Unfortunately, memories are all we have, but what memories! 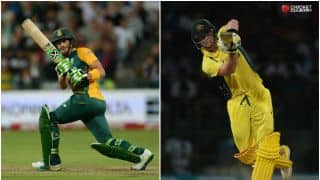 Why Australia tour of South Africa will be mouthwatering!