Brian Lara will be inducted into the International Cricket Council (ICC) Hall of Fame later today, Abhishek Mukherjee does an exhaustive statistical study comparing the West Indies legend with other left-handed batsmen in the history of the game. 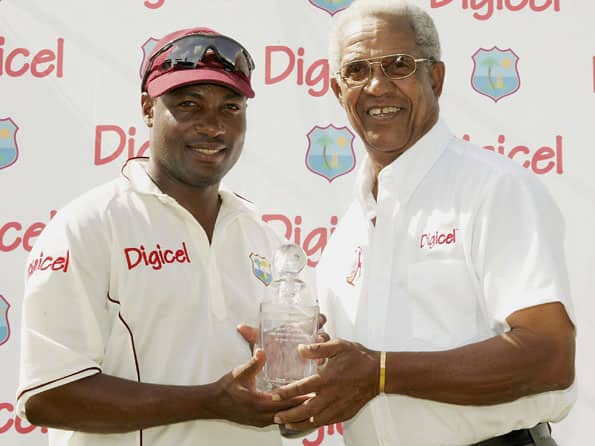 Brian Lara will be inducted into the International Cricket Council (ICC) Hall of Fame later today, Abhishek Mukherjee does an exhaustive statistical study comparing the West Indies legend with other left-handed batsmen in the history of the game.

You can worship Brian Lara. You can hate him. You can call him superior to Sachin Tendulkar, or inferior to Chris Gayle. Whatever you do – one thing is for sure: you cannot have followed cricket in the 1990s and the 2000s and have ignored the Trinidadian completely. It is difficult, after all, to ignore someone who can score a four hundred. Or even a five hundred, for that matter.

So where does Lara stand in the annals of legendary left-handers? Let us dig into the numbers and find out.

Before he had announced his retirement, Lara had gone past Allan Border’s long-standing world record of 11,174 runs, which was also the highest career tally by a left-hander. Since then, players like Tendulkar, Rahul Dravid and Ricky Ponting have gone past Lara – but the left-handed batsman closest him is his own countryman – the dour Shivnarine Chanderpaul:

Table 1: Most runs in career by left-handed batsmen

Not only has Lara scored a lot of Test runs, he has scored them at a terrific average as well. In fact, if one puts a 2,000-run barrier, Lara has a batting average as high as the best in business, and is surpassed only by three legends of three different eras – Graeme Pollock, Sir Gary Sobers and Kumar Sangakkara.

Lara has also scored his runs at a tremendous strike rate. He ranks second here, only after Adam Gilchrist (whose numbers are on entirely another planet). Not surprisingly, the list is dominated by modern batsmen, thanks to the shorter versions of the game:

Note: The complete strike rates for Clem Hill, Sanath Jayasuriya and Frank Woolley are not available. However, if we consider only those innings where number of balls faced is available for the three, Hill has scored runs at a strike rate of 74.91, Jayasuriya at 65.10 and Woolley at 60.61 – all having higher numbers than Lara’s. However, Lara would still make it to the top five.

Of course, Lara had to witness the decline of the once powerful West Indies side. This meant that Lara was not able to be the part of a lot of victories – and even if he had, a lot of wins had to be done single-handedly. He barely makes it to the top ten in terms of batting averages with a qualification of 1,000 runs, with names like Hashan Tillakaratne and teammate Jimmy Adams perched well above him. It is to be noted that the three men above Lara in this table are exactly the same names from the batting averages table! Also to be noted is the fact that less than 25% of Lara’s career hundreds have converted to wins:

Does the above statistic mean that Lara could not perform the way the other left-handed greats did? How good was he in the fourth innings of Tests – typically considered the time when conditions for batting are the toughest? Only seven left-handers have scored a thousand runs in the fourth innings – and Lara has made it only above the recently retired Andrew Strauss. As many as three West Indians make the cut, with the usual suspects – Graeme Smith, Matthew Hayden and Justin Langer all making it to the top five:

A batting average of 35.12 in the fourth innings does not speak very highly of Lara, especially when compared with the maestros of the chase, like Smith. If we consider fourth innings performances only in wins with a 400-run restriction, however, Lara shoots up three positions with an almost Bradmanesque average:

Table 6: Highest batting average in successful chases in the fourth innings of a Test (qualification: 400 runs) by left-handed batsmen

Of course, a batsman’s true mettle and character are tested only overseas. Lara did not get a chance to tour West Indies, and hence did not have to stand up to Curtly Ambrose and Courtney Walsh – two of the greatest fast bowlers of all time. Even then, Lara does make it to the top ten, and all names above him on the list belong to champions of various magnitudes:

If we go countrywise, Lara makes it to the top five (or top ten, as in case of England, South Africa and Pakistan) among southpaws. This is true for all major counties; the only exception to this is India, where Lara’s performance has been way below par: