Lawrence Rowe later went on score a triple-hundred as well.

On February 16, 1972 Lawrence Rowe set the paving stones for his 214 and 100 not out on Test debut. Abhishek Mukherjee looks back at a world record that stands still today.

“This is my home ground, and I have no right to get out here.” — Lawrence Rowe.

It was a typically hot Kingston day. A kid called Lawrence Rowe came out to bat against the New Zealanders in their tour match, and coming out at three, he took the Kiwis by surprise. He hit 9 fours in his first 50, and soon raced to his 100. It was batting like the Jamaicans had not seen for a long, long time. By the time he had reached 150, he had already scored 82 in boundaries; he eventually raced to 227, accelerating towards the end, and Jamaica had recovered to 451 from 138 for 4. The tourists were asked to follow-on.

In the next match, against President’s XI at Montego Bay, the New Zealanders put up 268 for the first wicket. Glenn Turner fought his indifferent form, and gained in confidence as the innings proceeded; he finished with 202, and the New Zealanders had gained some confidence going into the first Test at Jamaica. Rowe did not take a part in this match.

Rowe was an obvious selection for the first Test at Kingston. Garry Sobers won the toss and elected to bat. New Zealand took a strange decision in leaving out Bruce Taylor for the first Test. He was replaced by the tearaway Murray Webb, who was given the first over, ahead of Bob Cunis.

The crowd had started pouring in way before the Test had actually started; not only was the gallery full, but there were several men up the floodlight pylons as well. The keenness of the Jamaicans somewhat startled the New Zealanders.

Graham Dowling went on the defensive from the very beginning, placing a deep third-man and a deep fine-leg from the very beginning. Webb or Cunis could manage no movement, whether in the air or off the pitch, and Roy Fredericks and Joey Carew made merry on the flat track. The pitch, though a tad faster than the one used for the Jamaica tour game, was shiny and without a shade of grass. The 50 came up in 73 minutes, and the West Indian openers looked well on track for a big score.

Bevan Congdon, bowling at a medium-pace and a nagging line and length, provided his team with the first breakthrough when he trapped Carew leg-before. West Indies were 78 for one; Carew had scored a cheerful 43, and in came the 23-year-old debutant. Congdon and Jack Alabaster bowled steadily, and the score dried up somewhat.

After the cautious start, though, Rowe opened up. Dowling brought back Webb, who pitched one off, and Rowe glanced him for four. Webb bowled a bouncer, and Rowe hooked him for another four. He seemed to have taken off from his 227 scored a few days back against the same attack. Elegant yet effective, Rowe looked more and more ominous as he gradually settled down.

Fredericks, on the other hand, did not really care a lot about aesthetics. After being dropped by Dowling at the score of 46, he decided that enough was enough, and went on to bludgeon the hapless Kiwis. He was dropped again on 84 by Mark Burgess, and he edged one on 91 that flew between Ken Wadsworth and Turner.

Fredericks brought up his hundred in 276 minutes, and Rowe soon began to match him stroke for stroke. The hundred partnership came as well. And then, to add to the woes of the Kiwis, Rowe opened up even more and raced to his fifty. The third fifty of the partnership came up in only 43 minutes.

Rowe played with a pedigree that made even the West Indians, who were generally used to very high standards of batting, applauded the graceful strokeplay of Rowe. Not only was he pleasing to the eye, but he also never seemed to be getting out. Unlike Fredericks, he did not offer a single chance to the fielders, and as the day progressed, their shoulders began to droop. Dowling opted for the new ball, but it hardly made a difference to Rowe’s approach.

West Indies ended the day at 274 for one, with Fredericks on 126 and Rowe on 94. The New Zealand fielders could only hope that one of them would commit hara-kiri.

Rowe did not seem to be having a single weakness; he drove with panache, hooked ferociously hard, and cut very, very late, often almost out of the wicket-keeper’s gloves. It was evident that someone special had arrived on the Test arena.

It was an even hotter day, but the Jamaicans had poured into the ground in thousands to witness their local boy score a hundred on debut. He did not disappoint them, reaching his —hundred in 227 minutes. The duo continued: Fredericks was dropped twice more by Wadsworth and Cunis — and it required a brilliant catch by Hedley Howarth off his own bowling to break the partnership. Fredericks had scored 163, and he had put up 269 for the second wicket with Rowe. Rowe was exactly 150 at lunch, and did not seem like getting out at any point of time.

Dowling had to bring on Burgess now. When he was just short of his 200, Rowe lost Charlie Davis at the other end; he carried on nevertheless: he flicked one for his 17th four, bringing up his double-hundred. He then hit Howarth out of the ground, and then holed out to Dowling at deep extra-cover, going for an encore. He had scored 214 in 427 minutes with 19 fours and a six.

Sobers walked out, hit an extra-cover-drive that went like a rocket, and declared with the score at 508 for 4. The West Indian fast bowlers, Uton Dowe and Grayson Shillingford, provided with the initial breakthroughs, and soon the Kiwis were in trouble, reeling at 49 for 3 at stumps. The only consolation was that Turner was still there.

Day Three saw an intriguing contest between Turner and the West Indian attack. After the new ball lost its shine, Sobers brought on his spinners — David Holford and Lance Gibbs — and they claimed a wicket apiece. 108 for 5, and a follow-on seemed inevitable as Wadsworth walked out to join Turner.

Turner seemed perturbed, though. Not only did he seem to be at ease against the West Indians, he also played his shots, often in bunches of two or three at a time, and though Sobers brought back Dowe and Shillingford with the new ball, Turner was untroubled.

Wadsworth provided him with fine support. He had a torrid time against Gibbs, but soon, rather bizarrely, Sobers replaced Gibbs by Shillingford, and the pressure was off. The pair returned with the score on 280 for 5 at stumps, Turner on 164 and Wadsworth on an even 50. They had put on 172.

New Zealand began well, and as soon as Sobers claimed the third new ball, Wadsworth left his defensive shell and launched himself into the attack. As he hit Shillingford for a straight four, New Zealand saved the follow-on, and the partnership reached 200.

Though Dowe removed Wadsworth for a 295-minute 78 (the partnership was worth 220 off 295 minutes), New Zealand seemed to be out of trouble. Soon, Turner cut Holford to reach his 200. However, the other wickets fell in a heap, and they were bowled out for 386. Turner was left stranded on 223, going past Bill Brown’s 206 and setting a new record for the highest score for anyone who had carried his bat through a complete innings. The record still stands.

The West Indian openers raced off to allow Sobers enough runs for a quick declaration. After Congdon clean bowled both, Rowe was joined by Davis. Rowe, once again, seemed to be enjoying an afternoon stroll, reached 50 in 77 minutes without looking to be in any sort of hurry. Davis also made merry, and West Indies were 168 for 3 at stumps, 290 ahead, with Rowe on 67. Would Sobers allow Rowe his second century of the Test?

He did. Rowe’s batting helped him, though. He reached to 91 in no time, and survived a very close run-out call. He followed this with three singles and three twos to bring up his second hundred in only 153 minutes with 13 boundaries. It remains the only occasion when a batsman had scored a double-hundred and a hundred on Test debut, and the debut aggregate of 314 also remains a record.

Sobers declared immediately, setting a target of 341 in 310 minutes, and soon had New Zealand in trouble at 135 for 5. However, Burgess came to their rescue, and Wadsworth showed character yet again, and though Burgess fell playing a rather careless shot after scoring 101, the Kiwis managed to salvage a draw. 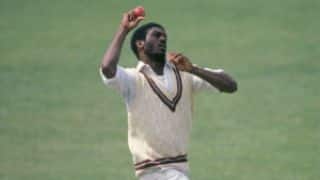