Hutton first captured the imagination of the cricketing fraternity as a 22-year-old when he smashed 364 against Australia at The Oval in 1938, to record the then highest score in Test cricket.

Len Hutton, born on June 23, 1916, was one of the greatest batsmen to have played for England. Hutton first captured the imagination of the cricketing fraternity as a 22-year-old when he smashed 364 against Australia at The Oval in 1938, to record the then highest score in Test cricket. In 79 Tests, Hutton scored 6971 runs at an average of 56.67 with 19 tons. He passed away on September 6, 1990 at the age of 74. Nishad Pai Vaidya delves into Hutton s book, Fifty Years in Cricket and picks 10 facts you should know about his record-breaking feat of 1938.

Don Bradman s knock of 334 at Leeds in 1930 had captured the imagination of the cricket world and was the benchmark for other batsmen to emulate. Although Wally Hammond had bettered that with 336 not out in 1933, to record the highest score in Test cricket, Bradman s 334 was a revered innings. Hutton was an impressionable 14-year-old, watching that iconic innings from the stands at Leeds in 1930 when Bradman got his record score. In the Oval Test 1938 when Hutton scored 364, both Bradman and Hammond featured as they were captains on opposite sides.

The great Hedley Verity was Hutton s mentor and shaped him in his early life. Hutton credits his success to Verity s guidance and unflinching support. As Hutton batted through the first two days, Verity kept a close eye on his mentee. As my innings developed, it was obvious that something out of the ordinary was in the offing, and the ever kindly and wise Verity made it his duty to stay with me during every lunch and tea break while I nibbled at a sandwich and sipped tea, Hutton wrote in his autobiography. Verity took great care to ensure that Hutton s mind was in the right place and his concentration was in place. He finished Day One on 160 not out. The following day was the designated rest day. Verity ensured Hutton stayed relaxed and took him to the beach.

As the 22-year-old Hutton moved close to Bradman s 334, the Australians tightened things. Bradman put men around the bat and he himself stood at silly mid-on. As Hutton was on 331, the pressure was intense and after every ball, he exchanged looks with Bradman. Those were mind games of that era! Hutton waded through the nervousness and hit a four to move to 335 and eclipse Bradman s score. The young man made his dream come true!

Hutton writes about the tension and drama as he inched towards Bradman s score. As Bradman packed the field around Hutton, the crowd and the players could feel the nerves. Once Hutton sailed past those moments, one of the umpires, Frederick Walden, famously said, Thank God! That s over!

Miles away from The Oval, Hutton s mother, kept track of her son s knock over the radio. When Hutton made it through, she is said to have shed a happy tear. The crowd chanted, For He s a Jolly Good Fellow, to honour Hutton.

Hutton s knock pushed him into the limelight, making him a national hero. The immediate effect was felt at tea on Day Three, after he had taken the world record, when 500 messages had come through to The Oval. He claims to have kept every congratulatory message years after his feat.

7. The second highest partnership for England for any wicket

In partnership with Maurice Leyland, Hutton put up 382 for the second wicket. The partnership was broken when Leyland was finally dismissed for 187. At the time, it was England s highest partnership for any wicket, bettering Jack Hobbs and Wilfred Rhodes 323-run stand of 1912. Leyland and Hutton s feat was subsequently beaten in 1957 when Peter May and Colin Cowdrey put up 411 against the West Indies. These two partnerships continue to occupy the top two spots for England.

When Hutton was dismissed for 364, Leyland escorted him to the bar. There was quite a gathering as his mentors and some Yorkshire teammates came to celebrate. Leyland got two champagne bottles. One for me and one for thee! Leyland said as he presented a bottle to the young Hutton. Incidentally, that was Leyland s final Test.

Hutton hailed from Pudsey, a small town in Yorkshire, which celebrated his feat in grand fashion. The Moravian Church in Pudsey rang the bell 364 times to honour Hutton s great feat!

10. The riches come through

The innings of epic proportions changed the life of a young man in ways he may not have imagined. It got him fame and financial rewards. In 1939, he purchased his maiden car. On one occasion, he parked it at a wrong spot and a policeman was about to reprimand him. Hutton s companion Cyril Turner revealed his identity to the policeman, who in turn requested for an autograph and dropped the idea of fining him!

(Nishad Pai Vaidya is a Correspondent with cricketcountry.com and anchor for the site’s YouTube Channel. His Twitter handle is @nishad_45) 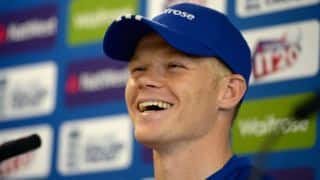