Maddocks found a place in history, as the man who made Laker the first to take 10 wickets in a Test innings and 19 wickets in a First-Class match.

We all know the moment by heart: Jim Laker came round the wicket; the ball pitched on middle-stump; Len Maddocks, for some reason, played on back-foot and missed with the ball hitting him on the pad. The appeal was a soft one, as was the norm of the day, more so with Laker, and the umpire’s finger went up. And they left the ground, all together, the fifteen men, amidst tumultuous applause from the Old Trafford crowd. And Maddocks found a place in history, as the man who made Laker the first to take 10 wickets in a Test innings and 19 wickets in a First-Class match. Len Maddocks passes away at 90

Maddocks did not come across as your ubiquitous Australian. He was so small and frail that you almost missed him in team photographs. Perhaps his slight frame aided him to become a quality wicketkeeper. Malcolm Knox wrote that Maddocks was “the size of a jumps jockey”, adding that he was “too diminutive to be considered a serious rival.”

He was born in the right era, too, between Don Tallon and Wally Grout, those two champions, and like many of his predecessors, often stood up to the stumps to fast bowlers. Unfortunately, his career coincided with Gil Langley, a superior man with the big gloves.

He was also unfortunate in the sense that 5 of his 7 Tests came in the 1954-55 and 1956 Ashes. On both occasions England won the urn. He was drafted in for the third Test at MCG after the first Langley was injured, and top-scored with 47 against Brian Statham and Frank Tyson. Not for the only time in the series, however, Australia were blown away by Tyson in the second innings.

At this stage of his career Maddocks averaged 30. Then it fell apart, his last 4 Tests fetching him a mere 27 runs. In fact, he kept sliding down the batting order further and further, appearing at 10 and 11 in the Old Trafford Test of 1956.

He got call-ups only when Langley sat out, once against West Indies at Sabina Park that summer, twice in the 1956 Ashes, and once at Bombay in the winter of 1956-57.

In the Old Trafford Test that earned him a permanent place in cricket history, Maddocks also had his best performance behind the stumps, with 3 catches and a stumping in England’s only innings. He would take 4 catches in his next (and last) Test at Bombay, albeit spread across two innings.

Maddocks played Grade Cricket for North Melbourne, and his Test debut came after a string of impressive performances on either side of the stumps for Victoria. He served Victoria for 15 seasons and Tasmania for another 4, playing First-Class cricket till well past forty.

Len’s brother Richard and son Ian also played for Victoria. Both Len and Richard Maddocks played Australian Rules Football as well, though Richard was the more accomplished of the two.

An amicable man with a permanent wide smile, Maddocks played club cricket for thirty years. He continued to remain attached to cricket, and in 1973 he convinced Australian Cricket Board (ACB) to found a cricketer’s benefit fund. However, that did not stop the major split in cricket that would leave poor Maddocks struggling midway on an Ashes tour.

His second stint in cricket began when he managed Australia on the Ashes tour of 1977. It was one of the most difficult Test tours in history, for the Australian team was split by Kerry Packer during the series.

However, he braved it all and famously stood firm under pressure. When allegations against Len Pascoe surfaced in the British media surfaced, particularly from Ted Dexter, Maddocks responded announced: “We are here to play under umpires appointed by the Test and County Cricket Board and we are prepared to by judged by them, not Ted Dexter.”

There were clashes. The seniors accused Maddocks of trying to convince David Hookers, Kerry O’Keeffe, and other youngsters to turn down Packer’s purse and return to mainstream cricket. Maddocks never came to terms with the World Series Cricket rebels (Gideon Haigh called him “the obvious establishmentarian”), going to the extent of accusing Ian Chappell of disloyalty.

Maddocks was selected in the Victorian team of the 20th Century, and was a life member of Victoria Cricket Association (VCA). He was later appointed as VCA Director, was VCA delegate to Cricket Australian, and served as selector for both Victoria and Australia.

Maddocks had a heart attack at the turn of the millennium and almost died. Thankfully, his wife Heather managed to dial emergency, and he was saved in the nick of time. Unfortunately, years of exposure to the harsh Australian sun resulted in skin cancer. 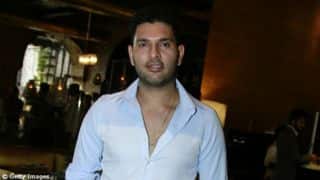 Yuvraj Singh explains why England is lucky for him; reveals cricketer's name he wanted to play alongside