Rahul Dravid's ODI career is so significant and holds out such important lessons. On Friday, Rahul Dravid was given a fitting farewell to his ODI career. The man with over 10,000 ODI runs was boldly dropped in 2008 as India chose to groom youngsters to prepare for the 2011 World Cup. In the wake of innumerable injuries to players and a severe crisis of confidence in India’s tour of England, he was recalled out of the blue to the ODI squad, upon which he promptly announced he would retire from the format after the conclusion of the ODI series in England. And he signed off with a fluent, if somewhat sedate, half century. It was not enough to earn a win for India, but I am guessing he wasn’t hoping too much for one by then!

Dravid and Test cricket have been described, rightly, as having been made for each other. But I was not so easily convinced of his utility in the ODI batting line-up. Dravid then had a tendency to get terribly bogged down and simply unable to turn over the strike. A score of one run off 21 balls against Bangladesh earned him a lot of notoriety. But the man never gave in. He battled hard and, to a large extent, managed to overcome his weakness of striking the ball firmly to fielders and score at a more acceptable strike-rate for ODIs.

His breakthrough in ODIs came in the 1999 World Cup. I should rephrase that line above, come to think of it: Dravid and crisis are made for each other. On the big stage, Dravid manfully shouldered immense responsibility as Sachin Tendulkar struggled to recover from the loss of his father as well as a back injury. His centuries against both Kenya and Sri Lanka were overshadowed by more flamboyant knocks from Tendulkar and Sourav Ganguly.

Then, as now, it hardly bothered him. More importantly, Dravid had cemented his place as a mainstay of the ODI batting line-up. And for a long time thereafter, there would be no looking back. Towards the latter half of his ODI career, he morphed into a very effective finisher, notably striking a 63-ball 92 against England in 2007. Had anybody suggested that he was capable of doing so in 1998 as he notched one off 21, there would have been incredulous guffaws from one and all.

And that is why his ODI career is so significant and holds out such important lessons not only for cricketers but for anybody looking to do better in his chosen walk of life. It is said that Dravid is not as naturally talented as a Tendulkar, but through sheer hard work and application he has earned his place as one of the greats of the game.

But that is more understandable in Test cricket; it does reward great application and character. ODIs, on the other hand, are supposed to be about flair. As the game has become more and more lopsided in favour of batsmen, big hitting and stroke making have become more sought after. And that means a bias towards brute physical strength and flashiness. The Stuart Laws and Alec Stewarts have made way for the Kevin Pietersens and Andrew Symonds. Gritting it out has gradually become irrelevant in ODIs. Dravid’s game is built around survival and occupation of the crease, things which are increasingly perceived as a liability in overs-limit cricket.

And what did he do? He did not lament the direction cricket was moving in. He did not lament that he was a misfit for the overs-limit version as one other talented batsman has done, to my mind. He adapted and carved out a suitable role for himself. He learnt to hit the ball high up in the air and shoot for maximum. He learnt to fluently strike cross-batted slogs. And he had his essential solidity and sensibility intact all the time, so you could count on Dravid to bat as the situation called for and not gun recklessly for glory and throw it away.

The culmination of his efforts was his role in India’s successful chase of 325 against West Indies in 2002. He scored a century at a healthy strike rate of 88 and saw India through to the end, as Sanjay Bangar stepped in to play a blinder on the last lap. Dravid anchoring a high-scoring chase! Who ever could imagine that! And yet, he would go on to notch several useful half centuries and a few tons as well, scoring over 10,000 runs in a format in which he was initially thought to be a misfit.

Good international cricketers work very, very hard. They’d have to, else they wouldn’t be there. But a select few adapt and succeed at things which they were widely regarded as being weak at. When tennis great Rafael Nadal made the Wimbledon 2006 final, reigning champion Roger Federer observed haughtily that he hadn’t expected to meet him in the final in a tournament so unsuitable to his strengths. He went on to win the coveted trophy twice, beating Federer for one of those.

Dravid was not meant to be a successful ODI batsman in anybody’s reckoning. But he was, and he mounted numbers that are hard to argue with. And that is what he must truly be saluted for. He succeeded in the arena he was born to anyway, but he is an even greater sportsman for succeeding where he should have failed.

Now when was the last time you seriously applied yourself at faring better at your least favourite school/college subject? 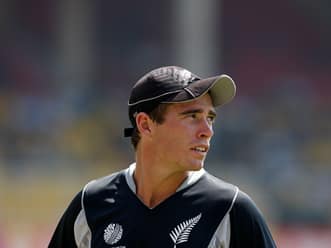