The Lord's cricket ground we know today is not the one they used back in 1814.

As the world prepares itself for the Bicentenary Match between MCC and Rest of World (RoW) on July 5, there has been an obvious question in the hearts of everyone waiting eagerly for the match: what is this match the Bicentenary of? Abhishek Mukherjee looks at the first recorded match played at Lord’s, on June 22, 1814.

Thomas Lord could bowl both spin and pace and batted low down the order. He started his First-Class cricket in an era when cricket did not have a shape, let alone anything close to its current form. Overarm bowling had not been legalised; Fuller Pilch (let alone WG Grace) was not born; and King George III ruled England; Bastille still stood; no person of European origin was born in New Zealand; Napoleon Bonaparte was a teenager; and the New World across The Atlantic remained largely unexplored.

In 1787 he founded a ground which he decided to name after himself. The first match it hosted was played between Middlesex and White Conduit Club on May 21, 1787. It was the home ground of MCC, and hosted their major matches till 1810. It also hosted the first Eton versus Harrow (1805) and Gentlemen versus Players (1806) matches. The ground, formerly the Lord’s Old Ground, is now Dorset Square.

A feud over rent caused Lord to abandon the ground and open another one in 1811 at North Bank at the north end of Lisson Grove. The Lord’s Middle Ground hosted three matches over three seasons, the first of these being B Aislabie’s XI versus G Osbaldeston’s XI on July 7, 1811. Unfortunately, the ground had to be relocated again because it was decided that the Regent’s Canal would pass through the ground.

So Lord decided to shift the ground for the second time in four years to what used to be a duck-pond in St John’s Wood. The first match, played on June 22, 1814, was an unremarkable one that was not given First-Class status. It was a two-innings, one-day contest between MCC and Hertfordshire with four-ball overs.

Hertfordshire were shot out for 79 with Lord Frederick Beauclerk, son of the Fifth Duke of St Albans, finishing with 6 wickets and Edward Budd with 4 more. Bentley, a Hertfordshire opener, made the only decent contribution with 33. MCC scored 161 in response; opener Andrew Schabner top-scoring with 55 while Budd added 36. Not much is documented about the third innings barring the fact that Hertfordshire were bowled out for 55 and lost by an innings.

– Ivo Bligh, great-great-grandnephew of Edward Bligh who played in the match, went on to lead England.

– On July 5, 2014 a star-studded contest was organised between MCC (led by Sachin Tendulkar) and RoW (led by Shane Warne). 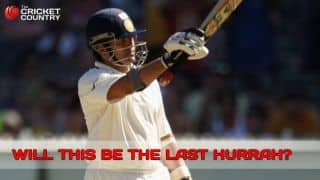 MCC vs ROW: Will this be Sachin Tendulkar’s last hurrah at Lord’s?