I was in Ruia College which had a fantastic cricket team. One day we were casually discussing the batting of Ajit Tendulkar. One of our friends told us: "Forget Ajit, have you seen his younger brother’s batting?" 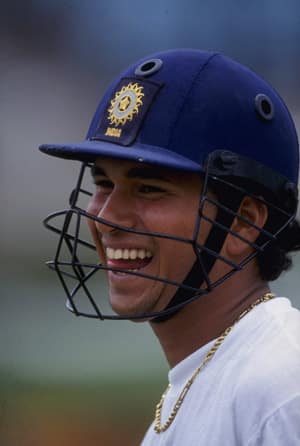 I was in Ruia College which had a fantastic cricket team. One day we were casually discussing the batting of Ajit Tendulkar. One of our friends told us: “Forget Ajit, have you seen his younger brother’s batting?”

I had not. So I went to Sassanian Sports Club to see the young Sachin Tendulkar bat. What I saw was a young boy who was placing the ball with pinpoint accuracy. He looked in total command of the situation and his footwork was precise.

He scored heavily in the school cricket and quickly became a household name. The whole lot under Ramakant Achrekar — Tendulkar, Vinod Kambli and Mayur Kadrekar — were big names in school cricket. The wicket on which they practiced was a mud-track. Tendulkar used to confidently play the turning ball, often adjusting the bottom hand and defending resolutely. I thought to myself, here’s a cricketer who will surely play the next level of cricket very soon. He did. As a 14-year-old he was named in the Mumbai squad by Sandeep Patil who was the coach-cum-manager that time. Although Tendulkar didn’t feature in any of the games, his willingness to learn being part of the Mumbai dressing room was evident. He batted for two-three hours and honed his skills. Often he was the last person to get out of the nets — and he hadn’t played First-Class cricket at that point.

At 14, he played one of Mumbai’s fastest bowlers Raju Kulkarni with consummate ease. Mind you Kulkarni was bowling flat out. Here was a young man handling the fiery deliveries of Kulkarni, and  was not intimidated at all. In a few months’ time Dilip Vengsarkar took him to the Cricket Club of India nets to face Kapil Dev — then the world’s best all-rounder. At that time, Tendulkar was not strong physically, but the positions he got into were brilliant.

Tendulkar scored heaps of runs in the Under-15 and Under-19 level. Scoring hundreds was like a walk in the park for him. It was just a matter of time before he made the cut in the Mumbai Ranji Trophy. At the Wankhede Stadium he scored a century on his First-Class debut against Gujarat which made the nation sit up and take notice of this wunderkind.

In the pre-quarterfinal game at Secunderabad, we played Hyderabad who scored 270 on the opening day. We lost Sanjay [Manjrekar] late on the first day. Dilip asked me to pad-up and come in as a nightwatchman. I was dismissed by Arshad Ayub for a duck. In walked Tendulkar and he handled the final few moments quite easily. He was unbeaten on three when the day ended. In the dressing room he told Dilip that he [Tendulkar] could have come in at the fall of Sanjay’s wicket and that Bombay have wasted a wicket. The next day he fearlessly attacked Ayub and Venkatapathy Raju. Tendulkar threaded the gap between mid-wicket and mid-on, which was a delight to the eye. He drove Ayub against the spin through extra-covers. ML Jaisimha was witnessing the game and he went gaga over the 15-year-old Tendulkar.

I used to bowl him in the nets and set imaginary fields for him. His emphasis was on placing the ball in between the virtual gaps. He hated it when I used to say: “but there is a fielder at that position,” which was done in jest. Tendulkar never minded that and concentrated on the next delivery.

There is an interesting memory of him which not many people know. Once I was standing at platform No. 1 at the Dadar station. Tendulkar’s train came in at platform No. 5. At around 7:45 a.m. the station is crowed. Little Tendulkar crossed the track in a hurry and we rushed to the practice at the Wankhede Stadium. Since we were four minutes late Sandeep [Patil] asked us to run four rounds.

I realised that he would be a great player to serve the nation. I told Ravi Shastri and Sanjay [Manjrekar] about it as the two had not seen him play.

The innings of 88 against New Zealand in New Zealand convinced me that he will play for India for a long long time. Today I am glad that my prophecy came true.

Tendulkar does not have anything to prove to anyone, but knowing him I am sure he will practice with the same intensity for his final two Test matches. He has fulfilled the expectations of Indians for 24 long years. Let us hope he continues to do so and retires on a high.

— As told to Sarang Bhalerao