I first heard of Sachin Tendulkar when he made his maiden Test century in England in 1990. I heard he was 17, and I thought, "Wow! That's impressive at that age". 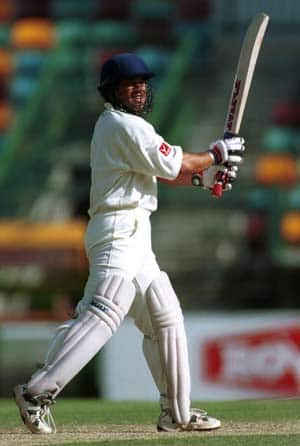 I first heard of Sachin Tendulkar when he made his maiden Test century in England in 1990. I heard he was 17, and I thought, “Wow! That’s impressive at that age”.

I was in England that season playing in the Lancashire League and played against him at the Scarborough Cricket Festival when India played a World XI in which I was selected in.

Next thing I was playing Test cricket against him during the Indian tour of Australia in 1991-92. The pads he batted in were different. I was told that Sunny [Sunil] Gavaskar had gifted to him. They were really special. That’s the first thing I remember about him.

I clearly recall the two centuries he scored during that tour. One was in Sydney, on a ‘turner’. The other was in Perth, on a ‘flier’— two very different pitches, and two very different centuries. Both wonderful innings — a sign of things to come. I found him a quite young man and very soft spoken. Not much has changed over the years.

Last year I was asked to facilitate a day at the Sydney Cricket Ground for the Royal Bank of Scotland. Sachin is an ambassador for them and was the guest for the day. I had not seen him for 15 years and he had not changed at all. He even looked the same. That day he spent time with all the children, all the parents, all the other people that were there, he signed all the autographs and had photos with everyone. We spoke about our careers and about the 1991-92 series. Again I found him soft spoken and humble. It was a pleasure to spend the day with him and captivating to watch him especially with the children.

Sachin has inspired a generation of cricketers worldwide. He is held in the highest regard in all cricketing nations. What a player! To watch him construct an innings is like watching a rose bud come to flower. For me, it has been length of his career that has been amazing — 24 years, 200 Tests and over 463 One-Day Internationals (ODIs)!

Cricket is a tough, physical game at the top level. These records are unbelievable. On the field he is tough, driven and has always been hungry. You have to be successful. Off the field he is a really nice person.

He has inspired the Indian nation many times. Some of those times under immense pressure. He is indeed a ‘national treasure’.

In Australia, he is spoken about as the best after Sir Donald Bradman. It’s always sad when a legend retires. We should all be grateful that we’ve had a chance to watch a master for over 20 years. He will be missed but never forgotten.

I now boast that I played against him! If I’m asked what my favourite Tendulkar innings, well it’s that 114 in Perth in 1992. Why? I got him out caught at slip by Tom Moody. Yep I boast about that too!

(Mike Whitney is an Australian cricketer who played in 12 Test and 38 ODIs. He made an unusual Test debut in the Ashes 1981, after playing just seven First-Class matches. He is also famous a television personality and used to host the popular game show ‘Who Dares Wins’)