Luke Ronchi smashed 170 not out runs off 99 balls batting at No. 7 against Sri Lanka.

Luke Ronchi smashed 170 not out runs off 99 balls batting at No. 7 against Sri Lanka at Dunedin on January 23, 2015. Ronchi arrived on the crease in the 21st over to join Grant Elliott, who had arrived in the 13th over. The scoreboard read 93 for five in 20 overs, and the Kiwis were on the verge of a collapse. But Ronchi and Elliott steadied the inning.

Ronchi was in the attacking mode from the beginning as he reached his half-century in 38 balls though the situation demanded defensive approach. Elliott reached his fifty in 59 balls. Ronchi continued his assaults and beat Elliott to the hundred and even reached 150 before Elliott got his ton. He took 74 balls to get to his maiden ODI century and completed his 150 in 92 balls. Elliott took 93 balls to score his hundred.

Ronchi and Elliott shared an unbeaten stand of 267 runs for the sixth wicket — the second-highest One-Day International (ODI) stand for New Zealand and the highest for sixth wicket in the history of ODIs. This was only the third 200+ partnership for Kiwis in ODIs.

Highest partnerships for each wicket in ODIs

Ronchi’s 170 not out is the seventh highest maiden ODI century for a batsman, the highest being 194 not out by Charles Coventry.

Luke Ronchi got to his 150 in 92 balls, which is the second-fastest in ODI history. He is bettered only by Shane Watson who reached his 150 off just 82 balls against Bangladesh at Mirpur in 2011. It is to be noted that AB de Villiers had scored 149 off 44 balls.

Highest individual scores at each batting position in ODIs

Two batsmen scoring 100s batting at No.5 or lower in an ODI inning

Grant Elliott scored his century batting at No.5 while Luke Ronchi did it at No.7. It is only the fourth time that two batsmen scored centuries in an ODI inning batting at No.5 or lower.

In the first three occasions, the batsmen involved were from No.5 and No.6.  There has been only one occasion when two batsmen batting at No.5 or lower scored centuries in same match from both sides — Shakib Al Hasan (106) and Kane Williamson (108) at Dhaka in 2010-11. 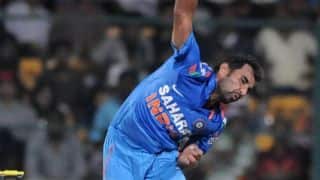 India's bowling is an area of concern, feels Kirti Azad