The 267-run partnership was the highest in the history for the sixth wicket in ODI cricket.

Rarely do you witness in the presentation ceremony, two players being awarded ‘Man of the Match’ award. Gushing with euphoria and diverging a sense of calm, Grant Elliott and Luke Ronchi claimed the award for their prodigious effort after New Zealand’s compelling 108-run thrashing of Sri Lanka in the fifth One-Day International (ODI) at Dunedin. It eventually turned into ‘Men of the Match’ award.

Put into bat by the visitors, New Zealand in pretty less time landed in to an uncomfortable zone. Martin Guptill was back to the sitting zone outside the boundary ropes in a matter of minutes. By the end of the 13th over the senior blokes — Brendon McCullum and Kane Williamson had disappeared. The middle line of defence, which was guarded by Corey Anderson and Ross Taylor, was also ably encroached by the tidy Lankan attack.

The scorecard read 93 for five after the end of the 20th over. Elliott and Ronchi were at the crease, surrounded by the Lankan men who had earlier sent five of their men packing in matter of 120 balls. There were 180 balls yet to be bowled and some runs to be added.

Ronchi had feasted the crowd last time around at Saxton Oval, when he raced to 32 off just 15 balls involving three hits out of the park. Was this another opportunity?

Ronchi, who believed in his hitting ability, clobbered Jeevan Mendis for two whacks towards the on-side region. The sound of the willow was special. It signified something special was waiting to come. Ronchi was the more aggressive of the two batsmen. Confidence oozed out in volumes from every stroke that came off from his willow. On the other hand, Elliott started on a calmer note but he too synchronised to his partner’s intensity.

The domination was quite visible as New Zealand took the batting powerplay from the 32nd over. The mathematics of this Dunedin ODI totally reversed. Ronchi was the first one to get to his half-century while his Elliott followed him soon after. What followed then was plethora of boundaries hit in T20 mode and some sensible rotation of strike.

This was the same match, same team which was tottering at 93 for five at one stage and now at the end of the 40th over, New Zealand was ready to climb the 300-run ladder having stocked prettily at 237 for five.

The final 10 overs made the Sri Lankan bowlers even look more miserable. Anything on the middle was lofted over on-side, something on the off was flashed through the covers. It was display of ruthless batting by both of them. Ronchi, whose previous best was 99 against South Africa, went on to score an unbeaten 170, whereas Elliott went on to hit his second ODI century. Ronchi got his ton off 74 balls but added the last 70 runs off just 20 balls as he chopped and bonked bowlers tiring at Dunedin.

New Zealand ended the innings at 360 for five. The 30 overs that once appeared scary  got another 267 runs to New Zealand.  It was highest score hit by a Kiwi wicketkeeper. The previous best was of McCullum, who scored 166 against Ireland. The 267-run partnership for the sixth wicket was the highest in the history of ODI cricket and the most unexpected from Ronchi and Elliott. 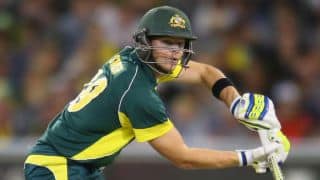