Luke Wright smashed 153 not out off 66 balls for Sussex against Essex.

Luke Wright smashed 153 not out off 66 balls for Sussex against Essex to become the fifth batsman to score 150 or more runs in a Twenty20 innings. Bharath Seervi lists the other stats and records of this innings and the match.

In the last match of the group stage of Twenty20 (T20) blast in England, Luke Wright smashed an unbeaten 153 off 66 balls to chase down a target of 226 against Essex at Chelmsford. This knock included 12 fours and 11 sixes in all. Wright reached his half century in 26 balls, his century in 47 balls and his 150 in 65 balls. He had scored another century a week ago on July 18 against Hampshire.

The inning by Wright is the fourth highest innings in T20 cricket. It is the fifth time a batsman scored 150 or more in an innings in shortest format of the game. Aaron Finch is the only one to do so in a T20I. Chris Gayle’s 175* off 66 balls is the highest score in T20s.

Most centuries in T20 cricket

Wright scored his first century in T20 cricket in 2007 against Kent. His two other centuries were — 117 for Melbourne Stars against Hobart Hurricanes in Big Bash League (BBL) 2012 and 116 not out for Sussex against Hampshire a week ago.

The above list may include some more names by the end of the ongoing T20 tournament in England as batsmen like Jason Roy who has 567 runs, Westley (525 runs) and Jim Allenby (510 runs) will play in the quarter-finals and further rounds of the tournament if their respective teams qualify. 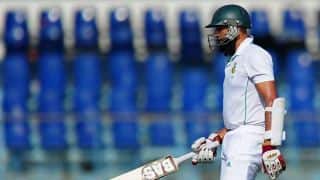