Edward ‘Lumpy’ Stevens, who died on September 7, 1819, was one of the greatest bowlers of his day, one of the first to give the ball air and achieve absolute accuracy.

Edward ‘Lumpy’ Stevens, who died September 7, 1819, was one of the greatest bowlers of his day, one of the first to give the ball air and achieve absolute accuracy. Arunabha Sengupta recalls the life and career of the man who was instrumental in the addition of the third stump to the cricket wicket.

Even the Duke of Dorset was mastered by the guile of Lumpy.

Whitehall Evening Post remained unimpressed with what the famed 3rd Duke of Dorset, John Frederick Sackville, had done with his life. So were the other chronicles of the day. However, all the scribes agreed that “at cricket His Grace has hardly any equal.” So also in tennis and billiards.

Yet, when his playing days were aptly captured in The Gentleman’s Magazine, the panegyric penned in 1773 began:

“His Grace for bowling cannot yield,
To none but Lumpy in the field.”

Because Edward ‘Lumpy’ Stevens was a class apart. He was the first perhaps to unerringly pitch on a length after giving the ball air, and the very first to obtain the subsequent direction that he desired. And with his penchant for choosing the most helpful part of the ground as the pitch, Lumpy often delivered from “o’er a brow”, or from the top of a sloping hill. Thus, on pitching, the balls often turned into vicious shooters.

Hence the other couplet:

“For honest Lumpy did allow,
He never could pitch but o’ver a brow.”

Yes, the ‘honest’ bit reeks with sarcasm. Lumpy was a confirmed master at choosing a pitch. And who can blame him? He bowled for his patron, Earl of Tankerville, the great rival of the Duke of Dorset. Matches were played for great, great stakes during those ‘good old pristine’ days of the 18th century. Betting was rampant, and patrons provided for their professionals to win them games and thus make them fortunes. And no one perhaps won as many games and as much money for his patron as Lumpy.

There were occasions when Dorset and Tankerville played in the same team and Lumpy would be at the bowling end. He would be picking up the wickets, as the two aristocrats stood at slip. Only Lumpy had the permission to move the peers around to the exact location where he wanted them. Because he always knew when and where there would be a catch coming in their way. He was that good.

How many wickets did he capture? No one can tell. Arthur Haygarth’s painstaking research yields reliable data from 1772. Counting from then, Lumpy played 83 matches designated First-Class, mostly for Surrey and England, a few for Hampshire and Kent, one or two for other teams. He captured 305 First-Class wickets. The average is unknown, but would be low, very low.

How many wickets did he take before the records began to be preserved? When at the height of his powers as a young man? We will never know.

What we do know is that he was one of the first to give the ball air and pitch with absolute accuracy. And perhaps one of the very few to have ever attained that level of accuracy.

The Earl of Tankerville won many a wager by backing him in matches, and in individual contests. None of them is as famous as the great bet at the Burway Ground at Chertsey. A feather was placed on the pitch, and Lumpy landed the ball on it four times out of four, a complete over. His patron became richer by £100. It would be close to £55,000 today.

No wonder the Earl took good care of his bowler. Financial support was a given. Additionally, his baronial kitchen and cellars were always at Lumpy’s disposal.

Yes, Lumpy had a great appetite as well. He could make apple pies disappear with the same alacrity as opposition batsmen. And legend has it that if the Earl, second only to Dorset in his ability in the slips, had the misfortune of dropping a catch off his bowling, he promptly recompensed Lumpy with a good bottle or two.

Was it this indulgence that gave rise to the nickname? Alas, that is also a bit of history lost along with the number of wickets that Lumpy actually accounted for.

Perhaps it was his shape, that was decidedly plump, somewhat round. If the drawings made during his lifetime are to be believed, there was a lumpiness about his face, but it was not particularly chubby.

At least three different explanations are offered for his nickname that has endured several centuries.

One commentator has suggested that his appearance was the root cause. Another attributes it to his singlehanded consumption of an enormous apple pie at a Hambledon club dinner at the Bat and Ball pub. And finally, another suggests that it was due to his habit of choosing lumpy pieces of the ground to bowl, so that the ball would shoot.

Whatever be the true reason, his nickname stuck.  And it remains famous almost a couple of centuries after his demise.

With time he became renowned enough for Almond, the itinerant painter, to immortalise his image on canvas. That was the earliest known painting of a cricketer.

But, no one called him Edward Stevens. He was always Lumpy.

The man and his methods

Born in Send, Surrey, Lumpy was first employed by Mr Porter at Chertsey, Surrey. And then it was the Earl of Tankerville who recruited his services at his estate at Walton-on-Thames. Lumpy sometimes worked in the garden of the peer, while spending most of his time mastering his craft and demolishing the visiting batsmen.

In an era when bowlers still trundled the ball along the ground, thus giving rise to a misused synonym ‘trundler’, Lumpy gave the ball air. It literally added a new dimension to the art of bowling.

He would have played a hundred or more games before he finally made it into the scorebooks for the first time in the early 1770s, when Hampshire played England at the Broadhalfpenny Down ground of Hambledon. He appears in those early records with a frequency that is almost unreal. However, those early records often did not record the name of the bowler. Hence the genius of the man is hugely understated, and needs serious extrapolation.

The most famous feat of this supreme bowler is well known, and it led to a change of the laws of cricket.

As John Nyren recorded: “On the 22nd of May 1775, a match was played at the Artillery Ground between the five of the Hambledon Club and five of All England: when [John] Small went in the last man for fourteen runs, and fetched them. Lumpy was the bowler upon the occasion, and it having been remarked that his balls had three several times passed between Small’s stumps, it was considered to be a hard thing upon the bowler that his straightest balls should be thus sacrificed: the number of the stumps were in consequence increased from two to three.”

There is some doubt about the accuracy of the account. Nyren was only 10 at that time and, in keeping with the splendid tradition of cricket chroniclers, was more than prone to add his fertile imagination into the mix. However, the third stump was soon added to the erstwhile mini-goalpost form of the wicket.

Many comparisons of Lumpy’s methods are drawn with his contemporary, although younger, great David Harris. The latter, a lifelong bachelor who spent every available hour perfecting his craft, was prone to get lift off the wicket to disconcert the batsman. Bowling underarm with a run up, he generated considerable pace. Enough to be mentioned in David Frith’s treatise The Fast Men.

Lumpy, on the other hand, bowled to dislodge the bail. Harris got more batsmen caught and was more difficult to score off.

Yet, both were supreme bowlers, and Lumpy bowled for England season after season till he was well into his fifties. He was 54 when he played his last recorded match.

Once his playing days was over, the Earl of Tankerville offered him a full time job as the gardener in Walton-on-Thames. Lumpy spent happy days in the garden. However, sometimes he did make the 50-mile trek down to Broadhalfpenny Down, to soak in the atmosphere and watch a game, and of course tuck into the refreshments at the Bat and Ball. He was a great trencherman.

He passed away in 1819. His great patron and benefactor, the Earl of Tankerville, survived him by three years. But, as a last gesture of sterling support in life and death, the Earl erected a tombstone over Lumpy’s grave. 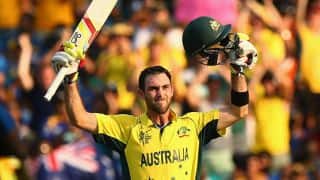