Madhav Mantri was a stalwart of Bombay cricket for close to two decades, and was one of those who laid the foundation stone for their surge in Indian cricket from mid-1950s to early 1970s.

Madhav Mantri, born September 1, 1921, was a stalwart of Bombay cricket for close to two decades, and was one of those who laid the foundation stone for their surge in Indian cricket from mid-1950s to early 1970s. A champion on either side of the stumps, Mantri scored 4,403 runs at 33.86 and effected 192 dismissals. Unfortunately, due to fierce competition from the likes of Probir Sen and Naren Tamhane, Mantri played a mere four Tests. He is also remembered as the uncle of Sunil Gavaskar. Abhishek Mukherjee narrates ten aspects of Madhav Krishanji Mantri.

1. Influencing a few Sunny Days: It is an oft-recollected story. Sunil Gavaskar was at his uncle s when he saw Mantri s coffin on the floor. There were several caps, including the Bombay cap, and the most prized possession of a cricketer the Test cap. Little Sunil asked for a cap. Mantri refused point-blank: the caps were not supposed to be gifted; they needed to be earned. The influence resulted in 10,122 Test runs.

2. The other Little Master: Mantri s influence on Bombay cricket continued well after his retirement. He was associated with Dadar Union, and played a major role in shaping the careers of Dilip Vengsarkar and Sanjay Manjrekar.

However, an even bigger contribution came on India s 1990 tour of England, where Mantri, acting as tour manager, gave unequivocal support to a teenager. Sachin Tendulkar scored more Test and ODI runs than anybody else.

3. Age is but a number! When he passed away in 2014, Mantri was 92 years 264 days old. Before his death he was India s oldest living cricketer. Of Indians, Mantri has been outlived by only MJ Gopalan and Cotar (or Cota, or Cotah) Ramaswami. Even in his last days Mantri had excellent composure and memory for a nonagenarian.

4. Wright out of the ground! India did not have an excellent tour of 1952, but there were shades of individual brilliance. Perhaps the most outrageous of them came at Canterbury: Doug Wright, that Kent leg-spinner who Don Bradman had troubles with, tossed the ball up: Mantri him out of the ground. The ball was caught in the crowds by, all people, the UK Deputy High Commissioner. A man of amazingly clear memory, he recollected the incident sixty years after it took place.

5. George! Mantri s nickname in the cricket fraternity was, of all things, George. It is usually believed that he was named after English wicketkeeper George Duckworth; the name was probably coined by Vinoo Mankad.

6. A spectacular season: Mantri was a sound opening batsman (while keeping wickets), but his batsmanship reached new heights in 1948-49. In consecutive innings he scored 117 against Bengal at Eden Gardens, 116 against Madras at Chepauk (in the quarter-final), and 200 against Maharashtra at Poona (in the semi-final). He failed in the final at Brabourne Stadium with 70 and 30, but Bombay won.

7. Sledging the umpire” Not only was Subhash Gupte dangerous, he was also notoriously miserly, and seldom bowled a no-ball. When Idris Baig no-balled Gupte at Dacca in 1954-55 (in the first ever Test on Pakistan soil) Mantri walked up to Baig with the words You are going to appear in the Wisden record books, for being the only umpire to have ever no-balled Gupte (as told to ESPNCricinfo). It worked.

8. Beyond 22 yards: Mantri donned many a hat after retirement. He was Indian national team s selector and manager and BCCI treasurer. But even outside cricket, Mantri was Chairman of Saraswat Bank and Secretary of Indian Education Society.

9. A surprising confession: Mantri was a Test cricketer, a Bombay captain, and the uncle and uncle-in-law of two of India s batting stalwarts (Gavaskar and Gundappa Viswanath, respectively). However, when James Astill interviewed him on what the highlight of his career had been , Mantri mentioned meeting Queen Elizabeth at Lord s in 1952.

10. A fan with a difference: In the 1950s and a young man often visited nearby Shivaji Park to watch Mantri play alongside the likes of Bapu Nadkarni, Ramakant Desai, and Madhusudan Patil, father of Sandeep. Bal Thackeray remained an ardent cricket lover. Steven Smith: England finished off better than us 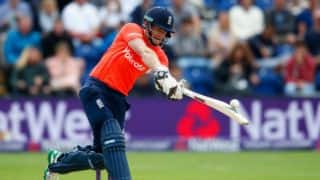