Sachin Tendulkar played a magnificent innings at Edgbaston in 1996.

In this 16 part series, Arunabha Sengupta captures one special moment from each of the 16 previous Indian tours to England. In the 13th episode he looks back at Sachin Tendulkar s magnificent 122 at Birmingham, as the rest of the batting collapsed around him.

Wizard in the wreckage

It was a snapshot of the Indian tale of the 1990s, and it was viewed across the world due to the magic of satellite television.

For the first time in history, Test match action travelled live from England to India. The Indian cricket fans already knew the plot by heart. The familiar batting debacle in the opening Test of the series. This time, they saw it. And along with they witnessed a miracle, a tale of counter-attacking brilliance never before conceptualised in Indian cricket.

On the third afternoon, Sachin Tendulkar walked out to bat with the score reading 17 for two. Nothing special in that something that happened so often in the nineties that it almost resembled the heart-warming clich s of musical comedies. Indeed, a Tendulkar masterpiece in the midst of disaster was oftentimes the glittering centrepiece of an otherwise sordid show. And this particular innings was the epitome of his brilliant solo acts.

The deficit was 99. Sanjay Manjrekar was injured, slotted to bat at No 7. The top of the batting was brittle with Vikram Rathore and Ajay Jadeja starting the proceedings. The middle, apart from Tendulkar, was almost a mockery, with Nayan Mongia at No 3, Sunil Joshi at No 6, captain Mohammad Azharuddin in the midst of a nightmarish loss of form.

The display of the batting order was as pathetic as the billing. The innings crumbled, falling like a pack of flimsy cards, resistance snuffed out Chris Lewis, Dominic Cork and Alan Mullally. And at the other end a spectacular structure was constructed with pieces of dazzling brilliance.

The bat of Tendulkar sparked fire and charm. The drives flowed, in the arc between cover and mid-on, scorching, classy and unstoppable. The cuts resounded across the ground. With each of the early strokes, there was an element of anticipation. The Indian fans knew that at least one flame would burn brightly amidst the smoke and embers of the decimated ruin.

This was new. There had been tales of many an act of Indian heroism, single-handed heroism on unfamiliar wickets overseas. Vijay Hazare, Poll Umrigar and, of course, Sunil Gavaskar had all undergone such periods, the sole man standing between honour and surrender. But, no one had ever done so with such consistency and dominance. And on this day the dominance was complete.

Mongia left at 35. Mohammad Azharuddin lasted three balls, and did not bother the scorers. Joshi played a dozen more deliveries and scored 12 more than the skipper. Manjrekar limped his way through 48 minutes to score 18. Tendulkar continued to flow in his rushing waves of mastery.

It was a scintillating display, almost too good to last, but last it did. The master scored 122 that day, with 19 boundaries and a six. The next best score in the innings was Majrekar s 18. The Indian challenge was almost over before he came in, was all but obliterated as he built his innings. The European Football championships kicked off on the same afternoon, creating a conflict of interest in the community of sports fans. But the Tendulkar magic kept all interested and glued to the seats and the screens. India were eight down, but some corner of the heart dared to hope another hour of the man and maybe a miraculous win could be snatched.

And then he mistimed a pull off Chris Lewis and Graham Thorpe caught a steepling skier at midwicket. Tendulkar walked back ninth out at 208. With him departed hope, and much of the crowd.

Yes, many had gone to see Tendulkar and left with his dismissal. It was often that way. Because, without Sachin Tendulkar, there would be no game at all.

The rest of the batting, aided by 14 extras, could manage just 97. Hence, India s second innings stopped at 219. It left the Englishmen 121 to win, and they got there easily enough losing just two wickets.

The next Test at Lord s saw the epochal debuts of Rahul Dravid and Sourav Ganguly. It is believed to be a watershed moment for Indian cricket. However, for sheer magic, there have been few innings like the Tendulkar show on that balmy Saturday afternoon. Sourav Ganguly: 10 things you need to know about the Prince of Kolkata 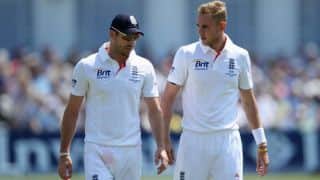