Anil Kumble’s only Test hundred came at The Oval in 2007.

In this 16 part series, Arunabha Sengupta captures one special moment from each of the 16 previous Indian tours to England. In the 15th episode he looks back at Anil Kumble’s only Test hundred at The Oval in 2007.

In the first Test, MS Dhoni combined with helpful elements to stall England on the brink of a certain win. In the second at Nottingham, Zaheer Khan ran through the English innings to put India one up in the series. However, magic and fairy tale combined in a delicious cocktail in the final Test at The Oval, when, 17 years after he had made his Test debut, Anil Kumble progressed, and finally scrambled, to his first and only Test hundred.

For long, it had seemed that the champion leg-spinner had not done enough justice to his batting potential. For someone who could compensate his inability to turn his leg-breaks with accuracy astounding enough to bag him 619 wickets, expectations are set staggeringly high.

And besides, Kumble could bat — he has seven hundreds in First-Class cricket to vouch for. He got behind the line like a seasoned pro, and could get down on a bent knee to essay scorching covers drives. And punctuated between clumsy defensive prods were square cuts that looked fierce and effective when they came off.

That is perhaps why his smile had never been wider than on that day, when the ball had crept past Matt Prior, all along the non-striker’s ‘V’ to the boundary, to propel him to 101.

Never one to back away from either short pitched stuff or a challenging contest, on numerous occasions he had played valuable knocks — even match winning ones.

His second innings 42 against Courtney Walsh and Kenny Benjamin, including some excellent drives on the up, was almost as vital as Sachin Tendulkar’s 85 in the win against West Indies at the Wankhede in 1994.

And against South Africa two years later, he had been in immaculate batting form. At Ahmedabad, he had batted adamantly, showing extreme reluctance in giving his wicket away, and had helped debutant VVS Laxman set a target that would win the Test. His best ever innings came at Eden Gardens during the second Test. Against the speed of Allan Donald, Lance Klusener and Brian McMillan, he had looked sterling even beside an effervescent Mohammad Azharuddin in full flow — blasting 13 boundaries in a fantastic rearguard innings of 88. It was the fear of exposing last man Narendra Hirwani, the proverbial rabbit, in front of this predatory attack, that prompted him to attempt a suicidal second run in that innings to be caught short of his ground. And probably he wondered along with many others whether that was as close as he would ever get to a century.

Kumble knew that perhaps never again would time and opportunity coincide with the few blessed days when timing the ball seemed as easy as making deliveries kick up from the cracks of a fifth day wicket.

And from the late 1990s, his batting abilities seemed to be on the wane. His forays at the wicket grew shorter, but for one or two tenacious displays in the face of collapse. By the middle of the noughties, he seemed destined to go down as a champion bowler who had once been good enough with the bat to come close to a scintillating century.

Yet, the fighter proved us wrong. From March 2006, he entered the purple patch — if it can be so termed — with his bat, following which he would score 742 runs at an average of more than 20 in the last 29 Tests of his career — including a hundred and two fifties.

A 58 in Mohali set the trend. A few months later, at Kingston, he came in at 91 for six, and scored 45 while adding 93 with skipper Rahul Dravid, before taking six for 78 in the second innings to win the first series in the West Indies in 35 years.

And finally came his moment of batting glory.

The series in England had been curious for Indian batting. Everyone in top order had been among runs, but no one had been able to reach three figures.

Up 1-0 and going into the final Test, the visitors looked for a huge score in the first innings at The Oval. Every man put his head down and piled up runs. Dinesh Karthik scored 91, Dravid 55, Tendulkar 82 and Laxman 51.

Kumble entered just before lunch on the second day, with the score reading 417 for six. Dhoni, at the other end, was blasting his way to a big score. For a while, the wicketkeeper batsman’s belligerence relegated the more subdued progress of the tail-ender to the background, but Kumble was quickly on his way, driving Monty Panesar crisply to the cover fence.

After lunch he followed it up by cutting Chris Tremlett twice for boundaries behind point and coming down the wicket to Panesar, hitting him inside out through the covers.

Meanwhile, Dhoni had gone berserk, launching Panesar for two sixes and then lofting Kevin Pietersen for sixes off successive balls. At 92, he tried for the maximum for the third time in as many balls and holed out at deep square leg.

However, Kumble moved smoothly into the role of the aggressor. With Zaheer in no hurry to get out, he kept rushing down the wicket to spinners and angling his bat to pierce the gap between slip and gully against the pacemen. By the time his 50 was up, Kumble was driving through the off side with élan, even against the faster bowlers.

He had progressed to 67 when Zaheer departed. RP Singh essayed a brief cameo, before hitting one back to James Anderson, leaving the older man stranded on 76 with one wicket to go. Sreesanth started with a flourishing square cut for four, and immediately tried a similar stroke off the next ball to be beaten all ends up.

Although Sreesanth had shelved his mercurial approach long enough to save the first Test of the series in the company of Dhoni, his methods did not inspire much confidence. It was perhaps a sense of desperation that made Kumble come tearing down the track and launch Panesar over long on.

With the senior statesman nearing his much coveted landmark, Sreesanth did put his head down. On that Oval wicket, it was as good as signing a long-term lease.

Another inside out drive off Panesar pitch-forked Kumble into his nineties, and as Pietersen came back, a cut through the covers took him to 97.

And two balls later, the moment of glory arrived in an extraordinary way — a curious mix of the gallant and the gauche that is so much the hallmark of Kumble’s batting. The ball was flighted, Kumble jumped forward to drive, and it came off the bottom edge, streaking past Prior. The frantic batsman, fearing the worst, flung himself face down to get back to the crease, but the ball was already making its merry way behind the keeper, where no fielder ever stands, ending up under the sight screen.

The smile said it all as he raised his bat — and it was reflected without distortion in the faces of his teammates who stood up as one to applaud. Here was a man to whom Indian cricket owed most of its wins, and the country stood up to rejoice to the beat of his happy heart.

No one could have grudged this magnificent man his milestone — not the tired Englishmen, not even fellow leg-spinner Shane Warne. At 36 years and 297 days, he became the oldest Indian to score a maiden hundred. And by getting it in his 118th Test, he broke the recent mark of 97 set by Chaminda Vaas.

But, the ever-persevering competitor, he knew his main job would still be to spin India to victory. He took three  wickets in the first innings, bowled his heart out to pick  up two more in the second.

England held out, riding on an unenforced follow on. But, India had secured the rubber, and, after countless triumphant series at the top of the bowling tables, for a change Anil Kumble ended up heading the batting averages. 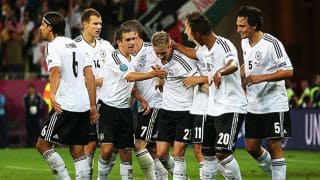 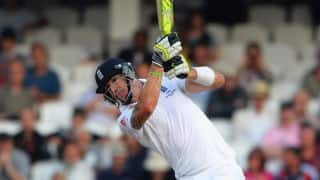