Vijay Merchant's gritty hundred was eclipsed by Compton spectacularly running him out.

In this 16 part series,Arunabha Sengupta captures one special moment from each of the 16 previous Indian tours to England. In the third episode he looks back at the Oval Test of 1946 which saw Denis Compton using his football skills to end a magnificent innings by Vijay Merchant.

It was the first full Test series after the Second World War. The summer game, making a comeback after the madness and mayhem, was played in front of a crowd of men still suffering from the aftershocks of gunfire and air-raid sirens.

As if in celebration of the return to normality, the first Test at Lord’s was attended by the sun – who, according to John Arlott, had seen very little First-Class cricket in 1946. The match was made memorable by the spectacular debut of Alec Bedser. The great Surrey medium-pacer showed that he belonged at this level with 11 wickets. There was some solace for India in the ten-wicket defeat – Lala Amarnath, the man unceremoniously sent back in 1936 before the start of the Test series, bagged five first innings wickets and scored a defiant 50 when India batted for the second time.

In 1936 it had been the Maharajakumar of Vizianagaram. On this occasion again the Indian team was led by royalty, but a prince with far superior cricketing credentials. The Nawab of Pataudi had scored a hundred for England on his debut at Sydney and had refused to join the leg trap of the Bodyline field of Douglas Jardine. He excelled in the game and did not kowtow to the British authority – which made him as different to Vizzy as possible. Now, under his thoughtful leadership, Amarnath seemed eager to make up for lost time. In the Manchester Test he picked up five more wickets in the first innings and added three more in the second for good measure.

A rather ill-advised shuffling of the batting order backfired and at the end of the second day, India struggled to save the match against the menace of Bedser, ably supported by Dick Pollard. With a quarter of an hour to go, wicketkeeper Datta Hindlekar waddled out to the wicket, joining Ranga Sohoni at the fall of the ninth wicket. He took guard, looked round the field, twirled his bat, adjusted his cap and took his stance. The defensive blocks were followed by cherry flourish. Sohoni met Pollard’s eager deliveries with a tense and straight bat. At half past six, Pollard ran in to bowl the last ball of the match, and Hindlekar pushed it to cover and called Sohoni for a run. The jolly stumper seemed keen to keep strike in case there was one more over. He batted at No 11, but believed in himself. The match was saved.

Compton’s square pass from mid on

However, the most memorable moment was reserved for the third and  final Test at The Oval, a truncated draw played under skies that resembled November.  It was asphalt grey and damp, and play started only after five o’clock in the afternoon. Alf Gover tried hard to extract pace from a dead track and had both Vijay Merchant and Mushtaq Ali missed off his bowling. At the end of the one and a half hours, both the openers were still there, with the score on 79.

On Monday, the wicket was a shade brisker, but not too helpful. The ball turned, but only after tarrying off the pitch to warn about possible consequences. But, the Indian innings was temporarily derailed. Laurie Fishlock, with just one stump to aim at, ran out Mushtaq Ali. Some quick wickets were lost. Pataudi and Amarnath played inside the line to Bill Edrich to lose their off-stumps. Hazare was caught off Gover.

However, Merhcant batted on, as if fine tuning perfection. Rusi Modi, brilliant on the tour, helped him steady the ship. Sixty runs were added before Modi forgot himself and was bowled while attempting to hoik Peter Smith’s off-spin to the leg side. Abdul Hafeez did not last long, and it was Vinoo Mankad who joined Merchant to support his prolonged vigil. The Indian opener was going on and on, late cuts and pulls lighting up his brilliant innings.

The score was 272 and Merchant was on 128 exquisite runs of pedigree when the magic moment took place. Mankad played Gover straight back down the wicket. The bowler struck his hand out but was unable to stop it on his follow through. The ball went past the stumps at the non-striker’s end, and Merchant took a few steps forward, looking for a run. Lurking at shortish mid-on was Denis Compton, the Arsenal winger. He ran across and stretched his foot, and sent the ball along its way with his instep. And it struck the stumps with Merchant out of his ground. The football skills had earned the most important wicket in the Indian innings.

Eight years earlier while playing for Middlesex at the Old Trafford, Joe Hulme, another Arsenal and England forward, had dismissed the late Jack Iddon of Lancashire with a similar kick.

The game stood interestingly poised at the end of the second day, with England on 95 for three in response to India’s 331. Mankad was bowling a splendid spell while Compton responded with strokes of brilliance. The Prime Minister Clement Atlee sat watching the proceedings from the stands with his wife.

However, on the third day the skies, after threatening to do so all along, finally opened up. No further play was possible and the match ended in a draw. 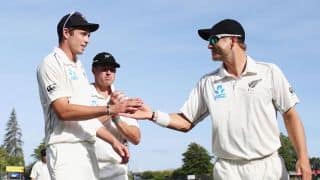 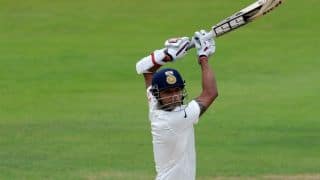