In this 16 part series, Arunabha Sengupta captures one special moment from each of the 16 previous Indian tours to England. In the sixth episode he looks back at the Headingley Test of 1967 which saw Geoff Boycott dropped after scoring 246

At the beginning of the series, the England selectors had pledged to play brighter cricket.

It is debatable whether flogging a depleted and dying attack constitutes brightness in the game, but throughout the innings the bowling pleaded to be hammered. The Headingley pitch was a plumb shirtfront. The Indian attack was appallingly weak. On that placid wicket, and in weather that played havoc with spinning fingers used to the tropics, the Indian bowling hardly looked Test class. A knock on the knee to Rusi Surti and a torn thigh muscle of Bishan Bedi, both suffered on the very first day, reduced it to almost below minor county level. And Geoffrey Boycott patted them back along the pitch.

He used the opportunity to stonewall his way back to form.

Later, the Yorkshire opener was honest about his crawl, but not overly apologetic. “I didn’t expect praise for my first-day performance. It was a grim-looking innings and I didn’t need anybody to tell me that. But I had shown that I had the character to stick with it. The alternative was to give my wicket away and return to the anonymity of the dressing room. I was never conscious of the time factor… but when you are in bad nick you never seem to get half-volleys. And when you do play a shot, the ball always seems to hit fielders.”

He had come into the Test with his form in disarray. His previous nine First-Class innings had produced 124 runs, including his only pair in county championships. Even his inclusion in the England side had raised a few eyebrows.

In the full six hours on the first day, spectators fought manfully against drooping eyelids as Boycott trudged to 106 not out. He started with tardy sluggishness, was reduced in the middle to run-less ridiculousness and finished the day with yawn-inducing monotony.

He scored 17 runs in the first hour and a pathetic eight in the second. There was a 45-minute period during the morning session when he remained scoreless. After lunch, he proceeded to 15 in the third hour and accelerated significantly to register 23 in the fourth. By then, even some diehard fans of his native Yorkshire had had enough. The stands, barely reaching 5000 to begin with, emptied significantly when he retired for tea at 63 not out. And going into the last session, he plodded his way to 21 and 22 in the final two hours.

Ian Wooldridge, a normally sympathetic journalist, wrote in the Daily Mail that his last three hours at the crease “could not be excused by his nearest and dearest relations.”

The other cricket correspondents were far more scathing.

John Woodcock noted in The Times: “He had set out to be there at the close, regardless of his responsibilities as a public entertainer.” Gordon Ross in Playfair Cricket Monthly was more biting: “He would have bored the spectators a good deal more had he not been a Yorkshireman. Perhaps it was as well that the match was not being played at Old Trafford. Every cricketer on the ground winced when he played a full toss or half-volley back to the bowler.”

And in the Daily Mirror, Brian Chapman wrote that cricket could “not afford to put in the shop window a joyless effort of this sort… nobody but Boycott could be blamed”.

Even while denying that he had instructed Boycott to get on with it after tea, his England and Yorkshire captain Brian Close did admit: “In different conditions such tenacity would be hailed as a masterly exhibition of the bulldog spirit. But on this first day of a Test, it was being viewed in a different light.”

Selector Doug Insole had supposedly come into the dressing room “to read the Riot act” and tell the batsmen to give the crowd something to enjoy — in keeping with brighter cricket. However, as Basil D’Oliveira recalled, “When it was time to go out to the middle, Boycs led the way and our skipper, Brian Close, said to me just as I was leaving, ‘Tell Boycs to take no notice, just play his natural game.’”

Boycott did not help matters when he later voiced that he was satisfied with his performance. “The undramatic fact was, I was happy to have got through the first day. I’d had a good night’s sleep and felt considerably more relaxed in the knowledge that the runs were on the board.”

He did bat far more freely on the second day, scoring 140 more runs in three and a half hours. When England declared at 550 for four, his final score read 246 not out in 573 minutes off 555 balls. The strike rate had jumped from 31.6 on the first day to 61.1 on the second. It remained his highest ever score in Test cricket.

Yet, the press was not satisfied. Far from mitigating his crime, his more adventurous approach on the second day proved that he could score quickly if he wanted to. For Boycott’s legions of enemies, the Headingley innings revealed the very essence of the man, a selfish player focused entirely on his own performance.

The Indians never looked like putting up a fight in the first innings, in spite of a superb 64 by the Nawab of Pataudi. However, following on, they played some amazing cricket, passing 500 with scintillating strokeplay. On the third afternoon, Farokh Engineer and Ajit Wadekar added 169 in just two and a half hours as they regaled the crowd with several flurries of boundaries. It was in perfect contrast to the fare on offer on the first day. Engineer fell for 87, Wadekar for 91. Following the fireworks, Hanumant Singh scored a crisp 73 and Pataudi was magnificent again as he stroked his way to an impeccable 148.

The 510 run second innings total set England 125 to win and they got the runs with six wickets and more than a session to spare. Boycott did not bat in the second innings after twisting an ankle while fielding. And when the wise men met the next Friday to pick the team for the second Test at Lord’s, he was left out for his slow batting — publicly described by the selectors as selfish.

Two years earlier, Ken Barrington had been similarly dropped for taking 437 minutes to score 137 against a sub-standard New Zealand attack at Edgbaston. According to Close, given the precedent set by the Barrington’s omission, there was no alternative but to sack Boycott.

The suspension was, however, rendered curious by the result of the match. To a large extent, Boycott’s innings had been responsible for batting India out of the game. As an opening batsman, he had laid the foundations of a big score. In fact, Lance Gibbs, the great West Indian off-spinner, later told Boycott: “If you had been a West Indian, you would have been a hero. No West Indian would ever get dropped for making a double century.”

According to Boycott’s biographer Leo McKinstry, the decision was less cricketing and more to do with public relations. The media was baying for action and the selectors felt they had to be seen to do something. Even Close recognised the difficulties of Boycott’s position, coming into the Test with after a prolonged run of poor form. He wrote later: “You had to admire the sheer guts of a man so palpably out of form yet so desperately trying to fight his way out of his bad spell.”

Although Close had supposedly put in his word for Boycott, the final decision did not amuse his star opening batsman. Boycott concluded that his captain “did not bat for me.” It was a bit unfortunate that Boycott and Close would never share the best rapport after the incident, especially given that the captain had tried his best and had been outvoted by the other selectors Doug Insole, Peter May, Alec Bedser and Don Kenyon. Close had said, “Look, I’ll give him a right bollocking and tell him not to let it happen again.” But according to the selectors the sheer selfishness could not be tolerated.

Boycott spent the duration of his omission scoring 20 and 98 not out against Gloucestershire, 220 not out against Northamptonshire, 59 against Leicestershire and 57 against Derbyshire. Close later remarked, “For the next few days I never ceased to admire the control he displayed in what was obviously a very trying time for him.”

Recalled for the final Test at Edgbaston, Boycott admitted that he was under tremendous pressure. “I was terrified in case I played a maiden over. I felt as if the whole press box was waiting for me to play a defensive stroke.”

Hence, according to him he decided to “ping the ball like nobody’s business”. He was out to Bedi, stumped for the first time in his Test career — one of only two occasions. He had scored 25, which he described as “a significant blow for brighter cricket”. Well, he batted for 61 minutes, and played 59 balls over the runs, but by Boycott’s standards it was perhaps the brightest it could get.

For the Yorkshire legend, the incident at Leeds left deep scars. Just before his retirement, he told the BBC broadcaster Peter Jones: “It is a stigma I will always carry. I won’t forget and I can’t forgive because I think it was an unnecessary thing to do.” He thought that it was this action that branded him as selfish for life.

However, one may ask how the event can be slotted under magic moments. Well, for all those Yorkshiremen who had to endure the crawl on the first day, the decision of the selectors was indeed a moment to savour. 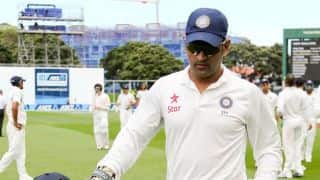