Majid Khan: 17 facts about the graceful Pakistani batsman and their first ODI centurion

Majid Khan: 17 facts about the graceful Pakistani batsman and their first ODI centurion

Born September 28, 1946, Majid Jahangir Khan, is a former Pakistani cricketer, famous for his elegant strokeplay and timing. Majid proved that footwork was overrated and what mattered was the hand-eye co-ordination. Years later, that’s something even Virender Sehwag built his legacy on. Had he been more consistent, he would certainly have been amongst the finest of his generation. Suvajit Mustafi looks at 17 interesting facts about the stylish Cambridge alumnus.

Majid’s father Jahangir was a renowned personality and played in 4 Tests for India. He appeared in India’s first ever Test and picked up four wickets in the second innings. He made major contributions to Pakistan cricket as an administrator post partition in 1947. Majid’s cousin Imran Khan is the greatest cricketer to emerge from Pakistan. His other cousin is former international cricketer Javed Burki. All three cousins— Imran, Javed and Majid captained Pakistan. Majid’s elder brother Asad also represented the Oxford Blues.

Majid’s father Jahangir famously killed a bird in flight while bowling during an MCC vs. Cambridge University match in 1936.The MCC museum at Lord’s has the dead bird as a part of it.

Majid attended St Anthony’s school in Lahore and later moved to the famous Aitchison College. He started his career as a pace bowler.

4.  A First-Class debut to remember

Almost a month after his 18th birthday Majid made it to the national side, against Australia at Karachi. He batted at No. 8 in the first innings and was dismissed without scoring. He didn’t bat in the subsequent innings. Opening bowling he dismissed Bill Lawry and Brian Booth in the first innings, and once again got Lawry in the second innings.

On Pakistan’s 1967 tour of England Majid hit Glamorgan bowler Roger Davis for 5 sixes in an over en route to an unbeaten 147. His innings consisted of 13 sixes. The county soon signed him and he played for it for eight seasons and captained them from 1973 to 1976.

Apart from the Glamorgan, Majid also went on to represent several clubs over the world. In England, he also played for Cambridge University. In Australia he represented Queensland, and back home he turned out for Lahore, Pakistan International Airlines, Rawalpindi and Punjab.

Majid once famously said, “You don’t need any footwork in batting, just hands and eye.” He followed it and found success against the best of the attacks and years later Sehwag proved Majid’s statement to be true.

Majid was the first Pakistani batsman to score an ODI century. It was his 2nd ODI and 14th overall. In August 1974 against England he struck 109 from just 93 balls to help Pakistan chase down 245 in the 43rd over. Considering the era it was a monumental feat.

10.  Scoring a hundred before lunch

On October 30, 1976, Majid became the first man after Don Bradman (and fourth overall) to score a Test hundred before lunch on the first day. This came against the touring New Zealand side and he scored 112 in just over two hours.

11.  Success against the mighty West Indies

Excelling against the West Indies in the 1970s was probably the toughest proposition but Majid with the willow excelled against the fiery likes of Andy Roberts, Colin Croft, Vanburn Holder and Joel Garner. Elegance personified, Majid scored 530 runs at 53 in that series. Pakistan lost the series 3-1.

In the semi-final of the World Cup 1979, Majid, along with Zaheer Abbas, almost won the game for Pakistan. Chasing 294, Pakistan were 176 for 1 at one stage, from where they lost the plot. Majid scored 81, adding 166 for the second wicket with Zaheer, who scored 93. Pakistan were bundled out for 250.

Like his cousins Imran and Burki, Majid got an opportunity to lead Pakistan as well. He captained Pakistan in 3 Tests in 1972-73 and 2 ODIs in 1975.

When Majid’s son Bazid made his debut for Pakistan at Barbados in 2005, the Khans became the second family, after the Headleys, to have a grandfather-father-son combination of Test cricketers. Coincidentally, for both families, one member played for a different side.

Jahangir played for India, while his son Majid and grandson Bazid played for Pakistan. On the other hand, while George and Ron Headley played for West Indies, Dean represented England.

15.  Did not achieve his true potential

An attacking batsman, a good bowler at the start of career and a spectacular slip fielder, in retrospect Majid did not do justice to his skills. He scored 3,931 Test runs at almost 39 and picked up 27 wickets at almost 54. In ODIs, he scored at 37.42 and picked 13 wickets at 28.76. He had the ingredients to be an excellent all-rounder but consistency wasn’t his forte. In hindsight, he could have been a great limited-overs cricketer.

Even after his playing days, he kept himself associated with the sport. He became an administrator for both — ICC and Pakistan. He was the Chief Selector for Pakistan in 1993. He officiated the Australia and West Indies Test series in 1995 as a match-referee.

Majid served as the Chief Executive of the Pakistan Cricket Board (PCB) from 1996 to 1999. A no-nonsense administrator, he resigned after the cries of match-fixing post the World Cup 1999. 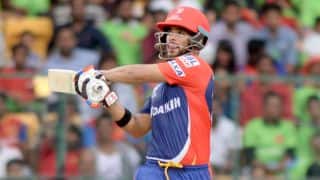 Darren Ganga gets “up close and personal” with Atif Aslam