Manprit Juneja, Vijay Zol and Abhishek Nayar shine for India A in unofficial Tests against New Zealand A

Manprit Juneja, Vijay Zol and Abhishek Nayar shine for India A in unofficial Tests against New Zealand A 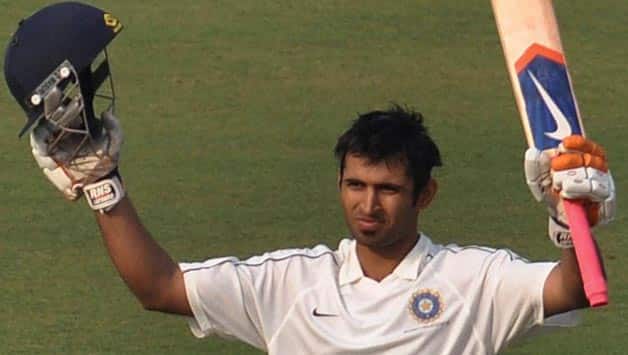 Abhishek Nayar led the India A side against New Zealand A. He scored a century and a half-century in the two unofficial Test matches © PTI

India A finished a largely rain-affected series against New Zealand A, but some of the batsmen made use of the opportunity and showcased their potential. Nishad Pai Vaidya reviews India A’s performance against New Zealand A.
Building a strong bench strength is imperative for any international side. For starters, the strength of the side is gauged by the record of their back-ups. Although, the primary national squad may have settled spots, the quality back-ups can push some of the main players for their places, thus answering the call even on the war-footing and seamlessly fitting into the mould. In that regard, the Board of Control for Cricket in India (BCCI) have handled the India A side well by handing opportunities to the most promising and proven domestic performers. A more senior India A side — full of contenders for the Test side — travelled to South Africa. A day after they completed their sojourn, Abhishek Nayar led another A team against New Zealand A at Visakhapatnam.

Although, the two games between India A and New Zealand A ended in draws, there were quite a few positives the hosts would take. The batting in particular saw numerous success stories. Manprit Juneja, the Gujarat batsman, made a big impression with an innings of 193 in the second unofficial Test. The 22-year-old played for the Delhi Daredevils in the Indian Premier League (IPL) this year and showed a sound technique and a balanced approach. He has a penchant for big scores and would be on the Indian selectors’ watch. On his First-Class debut in 2011, he announced himself with a double ton and has maintained an average of 79.75 from 12 matches.

Nayar, being the senior batsman in the side, also delivered in both games. Coming off a stellar domestic season, Nayar was given the responsibility of leading this side and he responded with a quick-fire innings of 101 in the first unofficial Test. In the second game, he scored 57 off only 55 balls and continued to maintain a good strike-rate. He has been very consistent for the champion Mumbai side, but hasn’t been able to break through to a higher level although he has had four One-Day International (ODI) caps to his name. So far, Nayar has scored no runs for India although he has bowled a few overs. He has had a forgettable IPL.

The third batsman who shined was Vijay Zol. The left-hander has been part of the India Under-19 setup since 2012 and was in the squad when they lifted World Cup that year. His temperament has been sound and the southpaw has shown the ability to score big at an early age. The first unofficial Test was actually his First-Class debut and he marked that occasion with an innings of 110. With Vinod Kambli-like idiosyncrasies, this Under-19 captain India captain is expected to carry his good form throughout the season. However, his predecessor, Unmukt Chand, struggled and could only score eight runs in two innings. VA Jagadeesh, the Kerala opener also shone in his only innings with a score of 91 in the second unofficial Test.

The bowlers did not have a lot to do and Jalaj Saxena was the only one who made a mark during the series. In the first game, he picked up six wickets in his only innings, whereas the honours were shared in the second match. Saxena has been in India A’s scheme-of-things for some time and is seen as a potential all-rounder.

This was a more junior side, but one can see that it has many potential India players. Nayar can use this performance to move to a higher level and deserves more chances to stake his claim in the Indian squad. For the likes of Zol and Juneja, it is a chance for them to gain confidence and build their reputation. On a whole, one may say these were just try-outs, important nevertheless. The one-day series is coming up and it features quite a few slam-bang and flamboyant players. That too should be a series to watch out for.

(NishadPaiVaidya is a Correspondent with CricketCountry and anchor for the site’s YouTube Channel. His Twitter handle is @nishad_44)

Daniel Vettori, Martin Guptill out of New Zealand’s tour of Bangladesh due to injuries

Saeed Anwar: The destroyer from Pakistan with silken grace