Johnson’s barrage of high-140s thunderbolts had England hopping, ducking out of trouble’s path.

As England were losing their way in the home series against South Africa, I opined that their usually effective overall solidity had come up short against the brilliance of Dale Steyn. It’s time to say déjà vu as England collapsed for 172 on a placid Adelaide pitch on Day Two of the second Test of Ashes 2013-14. No prizes for guessing the name of the assassin in question here: Mitchell Johnson.

A common theme in the contemporary writings of English cricket commentators and observers is that while the English team of the last few years may not have dominated world cricket, they have at least spared the fans memories of the dreaded 90s, regarded as the nadir of English cricket. Well then, welcome back to the 90s, didn’t miss you very much! In just two overs of hostile, brutal pace bowling, Johnson polished off five English batsmen, thus accounting for the middle-cum-lower-order-cum-tail of their batting line up. He also accounted for the ‘book-ends’ of the collapse — Alastair Cook and Monty Panesar. It was not hard to be reminded of Curtly Ambrose’s demolition job at Trinidad in 1994 while watching this familiar spectacle.

In fact, as that older article goes on to mention, England managed a Trinidadesque collapse at Kingston as recently as in 2009, with Jerome Taylor playing wrecker-in-chief. The common theme seems to be either judicious doses of well-directed chin music (Ambrose) or well-directed express pace bowling attacking the stumps (Taylor). Sadly for England, Johnson managed to combine both, a challenge further accentuated by his awkward slingshot action and left arm away-going angle.

And all of this ensued, as I mentioned earlier, on a placid Adelaide pitch. Let there be no allegations of Australia juicing up the pitch for Johnson’s sake.  The benign nature of the pitch was evident from the relative ease with which England handled Ryan Harris and Peter Siddle, not exactly pushovers themselves. But Johnson’s barrage of high-140s thunderbolts had them hopping, ducking, or just moving out of trouble’s path (Stuart Broad) — anything to avoid the deadly chin music being dished out.

While this match is still not over (though the way out of this mess is extremely arduous for England, to say the least), it has already raised questions about England’s ability to handle spells of hostile pace bowling. There are a number of occasions over the years that even a lone fast bowler (rather than a pack of hunters) has bowled them out of the game. A number of series have turned on their head because of England’s poor handling of such decisive spells. England were all set to win the Test series of 2009-10 played in South Africa, when the latter boxed them out by an innings and 74 runs at Johannesburg. In the last Ashes series played in Australia in 2010-11, the only English defeat occurred at Perth, with Johnson playing a big hand on that occasion as well.

And it is at Perth that a bruised (and likely battered) English outfit will head to from Adelaide. The much-vaunted English advantage of rebounding at Adelaide and tiring out the Aussies before Perth has vanished into thin air.  They would probably pin their hopes on rain or injury to Johnson or both.

It is way too early to say if England are about to fall off the proverbial cliff. But the Test history of both sides —England and Australia — seems to revolve around their Ashes performance (probably because of their extreme obsession with the tournament). If England are to avoid reverting to 90s mode, they need to turn things around quickly in this Ashes.  And to do that, they need to get over their pace bowling voodoo.

(Madan Mohan is a 28-year-old chartered accountant from Mumbai.  The writing bug bit him when he was 8 and to date, he has not been cured of it.  He loves music, cricket, tennis and cinema and writing on cricket is like the icing on the cake.  He also writes a blog if he is not feeling too lazy at http://rothrocks.wordpress.com/) 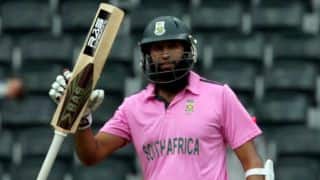