Tarot reader Shruti Chopra looks into her cards to give CricketCountry.com readers exclusive insights into what lies ahead in the IPL matches. In the below piece, she dwells into the Kings XI Punjab vs Rajasthan Royals game - the second IPL match on Saturday. 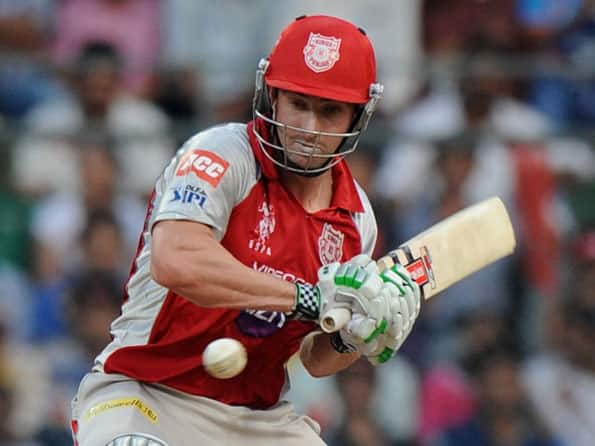 Shaun Marsh will be content, strong and a valuable player and will do well in a partnership against Rajasthan Royals © AFP

Tarot reader Shruti Chopra looks into her cards to give CricketCountry.com readers exclusive insights into what lies ahead in the IPL matches. In the below piece, she dwells into the Kings XI Punjab vs Rajasthan Royals game – the second IPL match on Saturday.

The Ten of Wands shows the Kings XI feeling more responsible and burdened. Despite this they will display good individual performances and better batting partnerships. They should be wary of not trying to implement too many plans, instead be well directed and aggressive like the Ace of Wands.

David Hussey, as a batsman, will need to put in more energy as he could look flat today. There will be spurts of some great shots, as explained by the Six of Cups, but he may not be able to sustain this since the Five of Cups is not looking favourable. As a captain he will need to pay more attention to concerns that crop up, as this won’t be an easy day for him.

Nitin Saini won’t have the best start. In fact, he will need to work on being mentally stronger in order to perform in his game. Despite the odds, if he manages too, then it will turn out to be a better day for him. He can provide the team with much needed stability.

Shaun Marsh, like the Nine of Cups is content, strong and a valuable player today. He will do well in a partnership.

Piyush Chawla will have many plans and will be quite miserly in giving away runs.

Praveen Kumar, supported by the Death card and the Three of Cups, will be part of some important successes. He should be cautious in leaking away extra runs.

Parvinder Awana may not be as economical, but will definitely bring about important wickets for the team.

The Rajasthan Royals are looking to build strong partnerships and like the Three of Cups are ready to strive for victory. The problem lies in their reliance of individuals to perform, which can cause some mental blockages for the team. The Two of Cups and the Wheel of Fortune allows them to overcome their problems and put up a fight.

Rahul Dravid will have a shaky start, but will soon come into form with his batting. The King of Pentacles exudes the type of authority he will have in the innings. As a captain he will be calm, strong and will assert his authority with ease.

Ajinkya Rahane will have a weak start. He needs to not look at all that has gone wrong for the team. Instead, if he concentrates on the match at hand, he will build a good partnership and can lead the charge with the Chariot supporting him.

Ashok Menaria is fresh, and has great positive energy. The Sun and Emperor grace him with the opportunity to make quite an impression today.

Brad Hogg will be presented with good opportunities, but his plans won’t be strong enough to achieve results. An average day for him.

Brad Hodge, will like the Eight of Pentacles find himself having to work very hard to make runs. His application will give him success.

Shane Watson has World and Magician card showing that he will be able to showcase his talents quite successfully today.

Ankeet Chavan will be aggressive and strong, but will need better direction. His ability to adapt through team advice will bring him results.