One of New Zealand's finest. 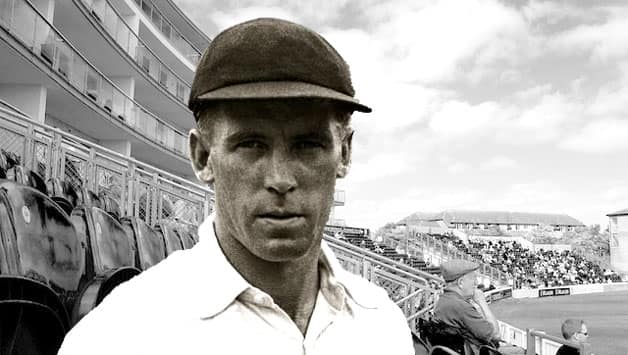 On October 17, 1917 one of New Zealand’s finest batsmen was born. Abhishek Mukherjee looks back at the career of one of the potentially great left-handers whose career was marred by the Second World War and the fact that he played for one of the weakest teams of his era.

It was unfortunate that Martin Donnelly played in only 7 Tests. These Tests spanned over two series – and the series were played at a gap of a dozen years. Only 13 of his 131 First-class matches were played in New Zealand. Unlike fellow southpaw Bert Sutcliffe, who was the craftier of the two, Donnelly was a flamboyant, risk-loving strokeplayer. In the words of Frank Keating, “it was as if all his own cricket had been a student pastime, a youthful wheeze not worth mentioning anymore.”

Donnelly was of a diminutive stature, but his exemplary footwork enabled him to play strokes of all kinds. And like all the great batsmen, Donnelly was famous for playing the ball remarkably late.

On seeing him bat, Neville Cardus exclaimed: “… had a touch of style, of class. What England would have done had he been one of us and available for selection in 1948…?” Indeed, CB Fry had mentioned that he was as good a left-hander he had ever seen.

Numbers really do not do justice to Donnelly’s calibre. It must be mentioned here, though, that Donnelly scored 582 from his 7 Tests at 52.90 (if a 500-run cut-off is used among New Zealand batsmen, this average is only next to Stewie Dempster). His 12 innings included as many as 5 scores of over 50, including his magnum opus at Lord’s in 1949, where he scored 206, the next highest being Sutcliffe’s 57. Donnelly scored 462 in the series at a phenomenal 77.00 – a crucial contribution to help the unfancied Kiwis hold the hosts to a 0-0 draw. In his first 4 innings of the series he scored 64, 206, 75 and 80. However, it is the Lord’s innings that Donnelly is mostly remembered for.

After England declared at 313 for 9 on the first day of the 3-day Test, Donnelly played dour cricket to hold fort against the English bowlers. However, with the score on 197 for 5, he decided to shift gears and launched a counterattack. He added 76 with Geoff Rabone, 78 with Frank Mooney and 85 with Tom Burtt. During the three partnerships he virtually hit every ball within his reach, and scored a double-hundred to set Lord’s alight. New Zealand scored 484, securing a 171-run lead. The 206 remains the only Test double-hundred by a New Zealand batsman on English soil.

It was not his first Lord’s hundred in a big match, though. Like Percy Chapman, he had completed the Lord’s Treble – scoring hundreds in all 3 possible big Lord’s fixtures: in July 1946 he had scored a 142 (out of 261) for Oxford against Cambridge. A year later he scored 162 (out of 302) for Gentlemen against Players.

To add to the set he had also scored a 133 in 3 hours (out of 307) playing against a Dominions XI against England in 1945 – possibly his greatest knock: it was a truly spectacular display of strokeplay, including a six that hit the roof of the Lord’s pavilion. A spectator, after watching the innings, supposedly went to a nearby pub, famously uttered the words, “I have just seen the most marvellous day’s play”, drank up and died on the spot.

Twelve years earlier, Donnelly was selected for the 1937 tour of England after just one First-class match for Wellington where he scored rather unassuming scores of 22 and 38. Such was his flair, however, that the selectors did not have an option. He made his Test debut at – it must have been obvious by now – Lord’s, along with a few people including Len Hutton. Both Hutton and Donnelly scored ducks in their debut Test innings.

The Lord’s exploits were not the only quirky bits of Donnelly’s career: indeed, he was the victim of one of the strangest dismissals in the history of the game. He had scored 55 for Warwickshire when Middlesex left-arm spinner Jack Young hit his boot; the ball lobbed up, went over his head, flew over the stumps, bounced behind the stumps and back-spun to hit the wicket. The umpire was not left with an option.

Earlier, he had purchased his trademark striped cap from Cairo, serving as Tank Commander during the Second World War in 1941. He wore it in whatever cricket match he played after the War. It was his lucky cap. It must have worked, especially at Lord’s!

Donnelly was also an excellent rugby player as well; he was a regular for Oxford University, and represented England against Ireland in 1947. He quit cricket at an early age (he found fishing a more attractive pastime), and went on to become a successful businessman in Sydney. He was inducted in the New Zealand Hall of Fame in 1990 despite not playing a single home Test. He passed away in 1999.