Guptill has been one of the pillars of strength of the Kiwi batting line up in the shorter formats.

Born September 30, 1986, Martin Guptill is a New Zealand cricketer, an elegant top-order batsman. Guptill has been one of the pillars of strength of the Kiwi batting line up in the shorter formats. A technically sound batsman who also has a precious gift of stroke timing, possesses the ability to launch a blitzkrieg on any bowling attack when on song. He backs his natural instincts but at times gets a bit carried away and tends to throw his wicket away. On his 31st birthday, Suraj Choudhari goes back from where it all started, and pens down 15 interesting and mind boggling facts about the smiling assassin.

Guptill is tenderly known as Guppy and Marty Two toes .

At the age of 13, Guptill met with a dreadful forklift accident due to which he unfortunately lost his three toes. The surgeons gave their best shot but all in vain, as his three toes were amputated. Hence, he gained the nickname Two Toed .

Guptill featured for New Zealand in the 2006 Under-19 World Cup in Sri Lanka.

Apart from his batting skills, Guptill is also a livewire on the field and has taken some insane catches only to turn the game on its head. He has a safe pair of hands and often fields in the slip cordon.

Guptill s finest performance is ODI cricket came in ICC Cricket 2015 World Cup quarter-final game against West Indies. He went ballistic and fired an unbeaten 237 to inscribe his name in the history of cricket with gold. With this knock he also holds the record for highest individual score in World Cup tournaments.

Guptill s splendid double-century in the ICC Cricket World Cup quarter-final also made him the fifth batsman in world cricket to achieve such feat in One-Day Internationals (ODIs).

7. Century in all formats

Guptill is among the rare batsmen to have completed centuries in all the three formats of the game. He has 2 centuries in Tests and 9 in ODIs, but with his innings of 101 not out versus South Africa at East London in December 2012, Guptill achieved the rare feat of having a century to his name across formats.

8. Yet to earn an IPL contract

Despite having all the requisite ingredients and reckoned for his maverick approach against the white ball, Guptill is yet to feature in the cash rich Indian Premier League (IPL).

9. Married to a star

Guptill is indubitably one of the stars in contemporary cricket. On September 13, 2014, Guptill got hitched to Laura McGoldrick, who is a television presenter and radio jockey.

10. First Kiwi to slam a century on ODI debut

Guptill made his ODI debut against West Indies in January 2009, and announced himself to the world with a century. He slammed a hard-fought unbeaten 122, studded with eight fours and two sixes in the contest that was washed out..

Guptill had a dream run in the 2013 ODI series in England, where he gathered 330 runs at an unbelievable average of 330. In the second game at the Rose Bowl, he murdered the English bowling attack and scored 189 not out off 155 deliveries. With this knock he also equalled legendary West Indian cricketer Sir Vivian Richards s score of an unbeaten 189 on English soil.

Guptill has a number of records to his name, in June 2013 he became the highest Kiwi scorer in ODI cricket with his innings of 189 not out against England. He broke his own record when he scored an unbeaten 237 against West Indies in 2015 World Cup. With these innings, he holds the two highest ODI scores for New Zealand.

New Zealand made it to the semi-finals of the 2011 World Cup where they lost to Sri Lanka. Guptill was the second-highest run-scorer for his team in the tournament with 262 runs from eight outings at an impressive average of 43.66.

In 2011, Guptill was roped in by English County team Derbyshire for that season.

15. Bereft of oomph in whites

Guptill has been a prolific run-scorer for New Zealand in the shorter formats but as soon as he dons the whites, he is Mr. Hyde. His Test average of 29.378 from 48 Tests corroborates the belief. 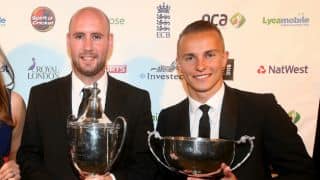