Unable to ignore her any longer after dominant performances, the selectors have recalled Punam Raut for the quadrangular series in South Africa to be held in May.

Comebacks are never easy. Maintaining peak performance once you get to the top is a test in itself, but fighting your way through the field to reach the top after having dropped off takes a lot of character. Not only does a player have to deal with the emotional stress of being axed, but also the challenge of raising one s game to optimal level once again.

Mohinder Amarnath was one of India s favourite comeback kings. Fourteen times he was dropped, and fourteen times he came back a better player. Mohinder was known to be suspect against fast bowling at the start of his career, but when he returned to the team, for the seventh time, in 1982-83, he took on the mighty fast bowlers of Pakistan and West Indies with great ease, that too at their respective dens. He then went on to win Man of the Match awards in both the semi-final and final of India s triumphant World Cup campaign. Like all successful players, he had used his time out of the team to introspect, work on his shortcomings and fight his way back.

Punam Raut is no stranger to setbacks either. The top-order batter from Mumbai has faced the axe twice, and on both occasions through sheer grit and determination forced her way back into the Indian team. She is the Indian women s cricket team s comeback queen.

March 2016. Punam was having a tough time. An average outing in the ODI series against Australia in February followed by a solitary innings against Sri Lanka in an ODI series at home saw her being ousted from the team. She missed the 2016 ICC World Twenty20 that followed and it seemed as though her dreams of playing for the country were slowly fading.

In the 2016-17 One-Day domestic Inter-State matches in October, Punam scored 123 runs in 4 matches. Despite an unbeaten 102 against Delhi to help Indian Railways regain the domestic title, Punam was ignored for the ODI and T20I series against West Indies that followed.

In her hour of darkness, with a cloud of doubt hovering over her, Punam, then 26, felt a familiar arm over her shoulder. It was her father, Ganesh Raut, and his words gave her the strength to make an astonishing comeback.

Soon after the team for the West Indies series was announced, I was extremely disappointed. I was really struggling and felt lost, says Punam. It was my father who helped me through that phase. He told me that he believed that I could make a comeback and that all I had to do was be strong and have faith in my ability.

The confidence she derived from her father, supplemented by a great deal of work in the nets alongside Chandrakant Pandit and her coach Sanjay Gaitonde bore fruit in the domestic T20 matches in January.

Ahead of the T20s, I worked on a lot of different shots with Sanjay-Sir. I wanted to be able to dominate the bowlers, so we worked on hitting the pacers over mid-off and mid-on; and also finding the boundary against the spinners, she explains.

Punam finished second on the batting charts with 273 runs in 7 matches at an average of 68.50 and a strike rate of 121.2. She drove, swept and scooped her way to 3 half-centuries, securing yet another domestic championship for Railways.

She missed the ICC Women s World Cup Qualifier in Sri Lanka in February, but that gave her time to prepare for the three-day Inter-Zonal tournament in March. As if continuing where she left off in the T20s, Punam smashed 346 runs in 4 matches with 2 centuries and an average of 86.50.

I changed a lot of things in my technique over the last two years. I didn t get immediate results, but I remained patient and kept working, she explains. It s important to have faith when you are working on something new, and that s what I did. This season everything came together and I managed to score some runs, but it is not something that happened overnight. It is two years of hard work.

Unable to ignore her any longer after such dominant performances, the selectors have recalled Punam for the quadrangular series in South Africa to be held in May. The tour will give Tushar Arothe, the team s new head coach, an opportunity to understand the players and finalise the team combination ahead of the World Cup in England. Punam s timing couldn t have been better.

Rewind to 2012 when Punam had found herself in similar territory. Her response had been as emphatic.

Punam has been dropped for India s tour of the West Indies in 2012. Recalled for their following series against England, she failed to make much of an impact, which meant her place was under scrutiny ahead of the 2013 Women s World Cup at home.

Much like her idol Sachin Tendulkar, Punam let her bat do the talking as she amassed 840 runs in 16 matches in the 2012-13 domestic season at a Bradmanesque average of 150.88. She scored 8 fifties and 2 hundreds, and was dismissed only 8 times. Punam had made her case in such forceful style that any doubt of her ability was crushed.

I don t know, says Punam, laughing when asked if it is the thought of playing in a World Cup that inspires such performances. Maybe there is something to it (that theory).

The World Cup is not like any other international series, it feels different. If we do well in the World Cup, everyone will take notice. It is our chance to raise the profile of the game in India, says Punam, who made her ODI debut in the 2009 Women s World Cup in Australia.

It was her father who spotted the spark in 10-year-old Punam and encouraged her to take up the game: It was my father s dream to play cricket when he was younger, but he wasn t able to pursue it. When he saw that I was interested in cricket, he encouraged me to play. He motivates me a great deal. My entire family is very supportive, but I feel my father supports me so much that there is often no need for anyone else.

I have played for the country because of him. I am living his dream.

Punam cannot thank her family and coaches enough for their support. They have been there through her highs and lows, and helped build an extremely positive attitude that has allowed her deal with the many challenges thrown her way.

I love taking up challenges. At international level you are bound to be under pressure, but every time I face such a situation I remember something Sanjay-Sir told me when I was younger: Never forget that you play the game because it is fun; there is no need to take unnecessary pressure. I try and live by this philosophy and enjoy every moment on the field.

Punam had started her career as an opening batter, but has had to bat at different positions (from Nos. 1 to 6) in almost every series over the past couple of years. Despite her positive outlook, Punam struggled to produce consistent results. Unable to score at a rapid pace, she would often get out trying to play a big shot one that never looked overly convincing.

It was during a camp at the National Cricket Academy last August, that she found a way to set her mind free and let instinct take over.

As cricketers, we tend to worry too much about what is likely to happen (in a match) and put a lot of pressure on ourselves, she explains. Negative thoughts are bound to pop up, and that s when you begin to doubt yourself.

At the NCA camp last year, we had a sports psychologist who worked with us for a while, and the advice she gave me was to let go and see what happens. I started off by playing with freedom in the nets, and when I saw that I was hitting the ball well, that confidence automatically took over in the matches. I just played bindaas because I knew I had done the hard work.

It is that freedom and self-belief that she has brought into her game. The technique and timing were on display from the very beginning, but the newfound attitude meant Punam 2.0 was one of the most-feared batters this season. The same balls she used to defend are now being punched to the boundary; and bowlers who had caused her problems in seasons past are dealt with severity.

What separates teams at the international level is not skill, but mental toughness, says Punam. All through my career I have watched teams like Australia, New Zealand and England play aggressive cricket and always dominate the opposition. As an Indian team, we haven t been able to do that on a consistent basis, so that is something I really want to change.

Cricket has evolved so much over the years. Now even the women s game is all about imposing yourself on the opposition. My aim is to play that style of cricket, without any fear.

With the World Cup only a few months away and a few places in the team up for grabs, much will be riding on Punam s performances in South Africa, but she is not too worried. Her focus is purely on trying to continue playing dominant cricket.

I am not going to think that I am playing international cricket after a long time. I just want to continue the rhythm in which I have been batting for the last few months.

There is no extra pressure. I want to enjoy myself and play aggressive cricket. My aim is to simply fulfil the team s expectations and do my best.

When Mohinder had returned to the Indian team in 1982, he helped India to a historic victory in the 1983 World Cup in England. If Punam s form is anything to go by, her comeback could inspire the women s team to similar heights after all, this tournament too is in England! 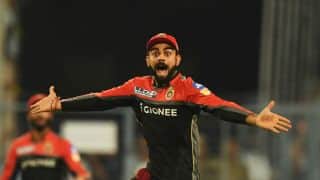