The first time I watched him in action was on the New Year's Day in 1989 when he turned up for Mumbai against Baroda at Thane’s Dadoji Konddev Stadium. It was his first season of First- Class cricket, but he was already famous for his world record partnership with Vinod Kambli. Most of the crowd at the stadium was there to catch a glimpse of the one who was touted to be India's next superstar - this in the stone age of zero TV coverage. 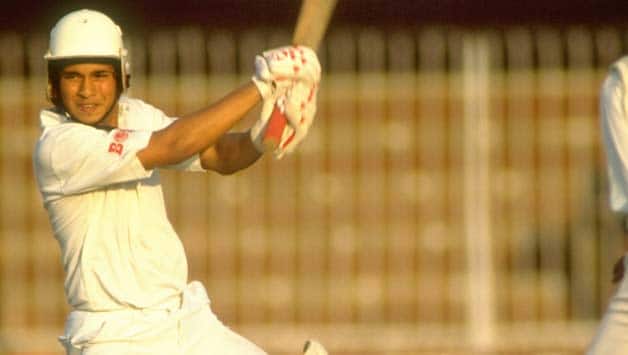 The first time I watched him in action was on the New Year’s Day in 1989 when he turned up for Mumbai against Baroda at Thane’s Dadoji Konddev Stadium. It was his first season of First-Class cricket, but he was already famous for his world record partnership with Vinod Kambli.

Most of the crowd at the stadium was there to catch a glimpse of the one who was touted to be India’s next superstar — this in the stone age of TV coverage. It was mostly articles in vernacular newspapers and one quality Marathi sports weekly called Ekach Shatkar (The Only Sixer) that talked about him and his potential. But I still remember this tremendous buzz created in the local cricketing circles. It seemed that the search for the next Mumbai batting successor to Sunil Gavaskar and Dilip Vengsarkar was over.

He got a raucous reception from the crowd when he walked into bat. The unmistakable pride and hope of the Mumbai cricket fan was apparent. And this was for a 17-year-old who had done nothing much in life till then. The teenager managed to generate a sense of excitement just by walking on to the pitch right since that time.

He played a couple of handsome shots and then got caught by the wicket-keeper. His innings was over — and so was the crowd’s enthusiasm. The match petered out into a dull draw the next day and the spectators had disappeared much before that as Baroda was supposed to bat in the next innings. But the first connection with this kid was made — the feeling and the pride in the fact that he was one of us. The Mumbai fans wholeheartedly adopted him as their favourite son since then, or, maybe, even a bit earlier.

The next time I saw him in person was at the Wankhede during the India-West Indies semi-finals of the Nehru Cup. The only other thing I remember about that match is Ajay Sharma‘s stumps broken into two by a Winston Benjamin yorker. Coming to the more important things, a friend had managed to get a couple of pavilion passes for the match. Now pavilion passes at Wankhede are not to be taken lightly. You can get a Vijay Merchant Stand or a Garware Pavilion even, but a Divecha Stand pass for us those days was equivalent to a Wimbledon finals ticket!

All the excitement of watching a big match live from a great location was instantly dissipated as Krishnamachari Srikkanth was run out even before we entered the stands. There was plenty of time to take in our surroundings as the Indian batting was nothing much to look at. Then I zeroed in this group of youngsters who were obviously First-Class cricketers as they were sitting there in their whites chatting and joking among themselves. It was the who’s who of Mumbai cricket’s future that time — Sachin Tendulkar, Vinod Kambli, Jatin Paranjpe were all there. To most other spectators they were just a bunch of youngsters and no one even gave the group a second glance. Or maybe that’s how the snobbish crowd in Divecha Stand behaved normally. I wasn’t going to be a part of that.

I wasn’t carrying an autograph book, nor was I bold enough to go and ask for an autograph. So I caught hold of a kid, told him who those guys were and using understated psychological warfare egged him on to go and get an autograph from Tendulkar. The problem of paper was solved by those complimentary cardboard caps given at the entrance, which anyways fail miserably in their primary role of protecting one against the sun. Tendulkar obviously wasn’t really used to autograph hunters then as a look of fleeting surprise crossed his face when the kid went up to him. I am not prepared to swear on oath because an intelligent criminal lawyer can prove me wrong, but I think Tendulkar then had signed with his right hand.

I wish I could say that I still have got that autograph, but I can’t. That cap got lost in the ravages of time. Today I have lost a part of something far more important to the same ravages of time. Time and tide wait for none, they say. One man defied it for a brief while. That man is deified by billions. He has given up his fight and agreed to write off a part of his kingdom. I, for one, am not shedding any tears. Somehow, somewhere he has touched a lot of Indians’ life and therein lies his true legacy. And three cheers to that. Even the crowd in the Divecha Stands will join the chorus.