As far as the Laws of Cricket are concerned there are no such restrictions on placement of fielders.

Australian skipper Michael Clarke committed a school-boy error (literally) when he placed Mitchell Johnson straight behind the bowler’s run-up against Pakistan. This is a field position usually unacceptable in some forms of, er, cricket. Abhijit Banare explains whether Clarke was wrong in doing so.

Michael Clarke, during the first day of the second Test against Pakistan committed a horrible mistake which seems to have been missed by the umpires and was not penalised. Of course, Clarke admitted after stumps that he tried everything he could have as Younis Khan and Azhar Ali grinded it out.

Even former Australian captain Allan Border was unhappy with Clarke’s tactics. “Where he (Johnson) is there (behind the bowler’s arm), I don’t think it’s in the spirit of the game. That’s the way I’d see that. When he moves to the mid-on side of straight, I’m a bit more relaxed about that. When he’s right behind the bowler’s arm, I don’t know.” Border said to Fox Sports.

Hang on: was there really an issue? Was it legal for Clarke to keep such a field? Of course, that depends on what kind of cricket you have grown up playing. If you have grown up playing gully cricket in India (backyard/garden cricket as it is called in other parts of the world), it’s quite likely that the ‘terms and conditions’ of playing can differ as widely as that of Indian insurance policies.

One of the unwritten (but accepted and common) rules in gully cricket is not allowing any fielder to stand behind the bowler (as shown in the image above). Let alone being no-balled, batsmen usually refused to bat under such circumstances. Why? That would perhaps be a different research. But if you really believe that such a rule is true as per Laws of Cricket then you surely need to read the following.

As far as the Laws of Cricket are concerned there are no such restrictions on placement of fielders. The only restriction regarding field placement is the leg-side field which was brought in after the physical threat the batsmen encountered during the Bodyline Series.

This is what Law 41 states:

In the event of infringement of this Law by any fielder, the striker’s end umpire shall call and signal No ball. (See image below)

So it’s perfectly legal to keep the fielder anywhere except the above rule! Of course there are a few more bizarre gully cricket rules which have created misconceptions among those following the game.

We will present some of those situations in another piece as part of our CricketCountry, Mythbusters series. Catch more of such ‘Mythbusters’ stories here 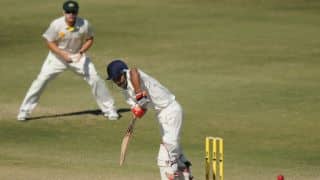