Michael Clarke exudes confidence and poise like his great predecessors

Michael Clarke exudes confidence and poise like his great predecessors

On the back of Michael Clarke's landslide victory at the Allan Border Medal Awards on Monday night, few people have asked about the influence the new captain has had on the successes of the Australian team since he took over the reigns. 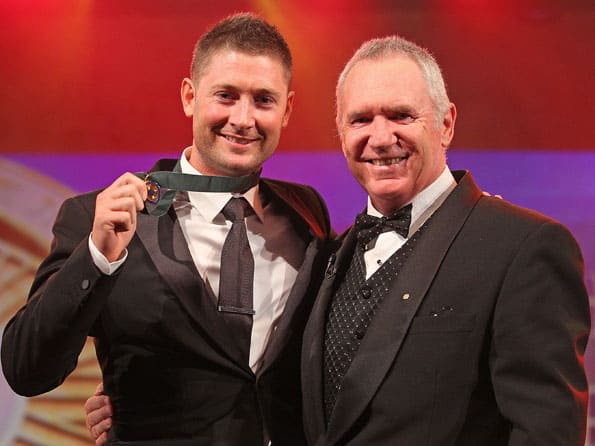 On the back of Michael Clarke’s landslide victory at the Allan Border Medal Awards on Monday night, few people have asked about the influence the new captain has had on the successes of the Australian team since he took over the reigns.


In many ways the biggest effect he has had is reflected in the night’s medal result. While his instinctive captaincy style on the field has been enjoyable to watch, his sheer weight of runs has been the stand out feature of his leadership to now.

One of the traits of our best captains has been their ability to perform brilliantly with the bat. Allan Border was a run-making machine. Mark Taylor not only hammered a Test triple century, but also scored over 7,000 Test runs. Steve Waugh was the No 1 batsman in the world for most of his tenure as captain, while Ricky Ponting is arguably Australia’s best since Sir Donald Bradman and Greg Chappell – both former Australian captains.

The point is that the best captains are usually the best players, or at least men who are on top of their games. Confidence with the bat and within usually transcends into calmness and clarity both on and off the field.

Michael Clarke, like his predecessors, has been able to exude confidence and poise and I am certain this is due, in no small part, to his sublime batting.

Through his positive intent at the crease, he has led from the front, showing his team mates the style of cricket he wants his Australian cricket team to play. His aggressive approach is leaving a trademark that will excite our fans and inspire our team. In leadership, it is one thing talking a good game.

The great leaders back up any words with their actions and through his performances Michael is offering an excellent example. His deeds far outweigh any words he could ever say.

This said, it is funny how the weight of a person’s words multiplies when they get better at their art. Through extraordinary performance with his bat, you can feel with every passing week that his team is starting to hang more and more on what he has to say behind closed doors. He has earned this.

One thing I know about life is that leaders must earn the respect of their men. A title or a badge is one thing, but the most powerful badge is earned. Without respect, all the badges or the fanciest titles in the world count for nothing.

Twelve months ago, Michael Clarke was given the title of Australian captain. Obviously this carried instant weight, but to his credit he has embraced the position with passion and commitment, and twelve months in, he is growing and developing nicely. At 30 years of age, he is exuding mastery as a batsman. This is no coincidence or fluke. Through sheer hard work and attention to detail over many years the young ‘Pup’ has turned into a batsman who is respected and admired around the world. No longer a puppy, he is more like a fully-grown watchdog who is bearing his teeth to the world.

After a year in the captaincy position, Michael will be the first to concede he has plenty to learn, but if the journey of his batting career is anything to go by, then there is no reason why his captaincy can’t be as equally spectacular.

Time will tell and, of course, there is plenty of work to be done, but when you pair steely determination with natural talent, the chances of succeeding are pretty good. With big shoes to fill the current skipper is on right path.

Watching him on the stage at the Allan Border Medal the other night with one of our greatest and toughest captains, Allan Border, it was like the master shaking hands with the apprentice; an apprentice who is now ready to step out on his own to make his mark on the world.

Sachin Tendulkar should mull over his career: Ian Chappell

Cricketing rifts - 4: India in the 1940s - Merchant-Hazare and Amarnath-De Mello