Clarke publicly announced his decision to retire following the Oval Test on Saturday.

Michael Clarke‘s extremely successful career is all set to be over in the wake of Australia surrendering the Ashes to arch rivals England at Trent Bridge in the fourth Test. Clarke had been struggling for runs since past few weeks, and the pressure kept mounting on him following Australia s hapless show in the Ashes 2015, a series wherein they were expected to finally end the drought in England. Devarchit Varma explains what made Clarke finally succumb to innumerable challenges that he kept battling, and at the same time, how poor will Australia is after his exit. READ: Michael Clarke retires from international cricket

It will not be an exaggeration to say that Michael Clarke had an outstanding career as Australia s captain even though questions kept hovering over their ability to win outside home, in conditions that were against them. Under Clarke, Australia had significant amount of success in their backyard, but he failed to inspire his side to glories overseas and this will remain a fact that will be a blot on his career that spanned more than a decade. READ: England win Trent Bridge Test by innings and 78 runs to regain Ashes

Clarke announced his arrival on the international circuit with a splendid 150 against India at Bangalore in 2004 an innings that proved that Australia s future was in safe hands even after the retirement of their legendary players. Clarke remained an understudy for Australia s captaincy under Ricky Ponting for a major part of his career, and he finally took over as the full-time leader when the latter was forced to step down.

Clarke tasted success immediately overseas when he led Australia to a 1-0 series win in Sri Lanka in 2011, and the 4-0 rout of a star-studded Indian side in 2011-12 proved that their decline was addressed properly. However, a poor tour of South Africa in 2013 and the defeat to England in the Ashes 2013 increased the worries for Clarke and the Australian cricket management, which suffered a new low in between these two tours. VIDEO: Michael Clarke cries while talking about his retirement from international cricket

The tour of India in 2013 wherein Australia were blanked mercilessly by a side that had just begun its revamp proved that Clarke and company were far off from being a settled unit, and the Homeworkgate scandal meant they touched new lows. The only redemption that Clarke and his men could have had was by winning the Ashes 2013-14, which they managed to in an emphatic manner.

Australia went on to stamp their authority in international cricket with a memorable win in South Africa in early 2014, and the win in the ICC Cricket World Cup 2015 in their backyard proved to be one of the most successful campaigns they had under Clarke.

Amidst all this, Clarke kept battling innumerable issues. The embarrassing episode in India alongside the defeat, Clarke s resignation as a selector of the Australian team a post that his predecessor Ponting had fought throughout his career for, his dodgy back and the decline of the quality of cricketers produced by Australia were some of the issues that he battled throughout his reign. READ: Twitter reacts to England regaining the Ashes

The unfortunate demise of his little brother Phil Hughes certainly broke Clarke from inside. But he remained a warrior, Clarke battled all the odds and turned up in every single match for Australia on the back of tremendous preparations the only mantra he knew to excel in international cricket.

Clarke s untimely retirement that has shocked the cricket fraternity was indeed a realistic possibility. Australia are the current world champions, and are sitting pretty at the No. 2 in the Test rankings. Clarke did all he could to carry himself with all the niggles and his team so far, and the change in guard was on the cards. Unfortunately, no one thought it would be in The Ashes 2015. No one thought Clarke and his men would fail so miserably that there will be no place to hide.

Nevertheless, the warrior that Australia will lose in Clarke would be irreplaceable. He was a veteran of many battles, among the last of that golden generation of Australian cricketers who always knew one result: win.

Australia will be poorer without Clarke. 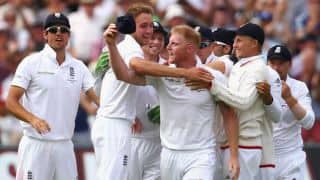