"The conditions at PSL are completely different, the ground are bigger. This is a different challenge altogether. It s a quick tournament. Adjusting to the players, how we want to play, how we as a team plan is a bit different. " - Misbah-ul-Haq

Misbah-ul-Haq kick started Hong Kong Island United s campaign in DTC Hong Kong T20 Blitz with a convincing victory over Hung Hon JD Jaguars at the Mission Road Cricket Ground, Mong Kok. Misbah played a composed innings, acting as the second fiddle for most part, yet kept a more than healthy strike rate. It was in the last two overs that he finally exploded. In the last 7 balls he faced he hit 6 sixes and a boundary, taking his score to 82 not out off just 37. Misbah feels that it was important to get a win under the belt in the team s opener. (It is) always pleasing to have a win under your belt. First game, important one. Happy that we got through, said Misbah. It s [The Blitz is] going well. The first two games yesterday that was good. Today s game was crunch. Lot of runs and it s good fun, he added.

Misbah, who led Islamabad United in the Pakistan Super League (PSL) recently, believes that it is a different sort of challenge to play cricket in Hong Kong. The conditions at PSL are completely different, the ground are bigger. This is a different challenge altogether. It s a quick tournament. Adjusting to the players, how we want to play, how we as a team plan is a bit different. The challenge is a little different and we are enjoying it.

Talking about the small boundaries in the stadium, Misbah said, It is important to take your time and play good cricketing shots, that is what clears boundaries. If you look to clear the boundary thinking the boundaries are smaller, there is a chance of getting out. You have to play very smartly. Especially while bowling, the bowlers have to adjust their lengths accordingly.

Misbah struck 4 sixes and a four in the final over of United s innings, which gave them the momentum going into the break. But Misbah believes that a team can only do that if they set a good foundation, going into the last couple of overs. When you are playing for a team and don t know what the resources are, what sort of batting line-up you have, you just try to bat through 20 overs and see whatever maximum you can do. That s what I was trying to do. I was just playing normal cricketing shots, till the last couple of overs. It was in my mind that with the kind of boundaries here, you can easily take 35-40 runs out of that. Try to get somewhere near 200 and then capitalise in the last couple of overs. That was the idea, said the Pakistan Test captain.

Sharing his thoughts about coming to Hong Kong to play cricket, Misbah said, It is always good to play cricket in new places. Watching Hong Kong play in international cricket, lot of Pakistani guys are here. Team owners are the same [as Islamabad united]. Good friends and good relations. Two of the other guys like Saeed Ajmal and [Samuel] Badree play for the same team. It s good fun. So, we decided we re going to play here and enjoy the cricket.

Meanwhile, Jaguars captain Kinchit Shah said that he was disappointed with the result and his team were well in with a chance to win it. Disappointing, of course. Chasing 217 was already a big target, but definitely achievable. We got a decent start. We were 10 overs for 90, but it s just the wickets. [Darren] Sammy got out, [Johan] Botha got out. We were still in position. [James] Franklin batted really well and even Jonathan Foo did exceptionally well.

Asked if conceding 29 off the final over cost his team the match, Kinchit said, That kind of is the reason. Ashley Caddy bowled three really good overs, gave him the last over, got hit for 29 runs. That s cricket and that s the reason why they scored 217, he added. 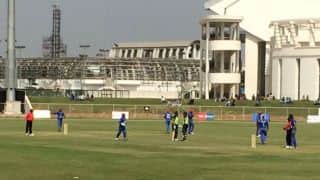