Aamir Sohail, former Pakistan captain and opening batsman, looks ahead to the challenges of the tour of South Africa for Misbah-ul-Haq and his team in unfamiliar conditions. Sohail also sheds light on what he believes should be the Pakistani tactics in South Africa, as well as outlining the roles of key bowlers such as Mohammad Irfan and Saeed Ajmal in a chat with Saj Sadiq of PakPassion.net 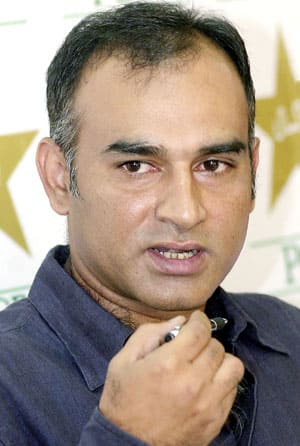 Aamir Sohail (above) said with no leg spinner, Saeed Ajmal is going to have to bowl really well against a classy South African top order and skipper Misbah-ul-Haq needs to rotate his bowlers and utilise them very well against South Africa © AFP

Aamir Sohail, former Pakistan captain and opening batsman, looks ahead to the challenges of the tour of South Africa for Misbah-ul-Haq and his team in unfamiliar conditions. Sohail also sheds light on what he believes should be the Pakistani tactics in South Africa, as well as outlining the roles of key bowlers such as Mohammad Irfan and Saeed Ajmal in a chat with Saj Sadiq of PakPassion.net

I think Pakistan has made the right decision in adding a couple more fast bowlers to the Test squad in South Africa. I would have taken five quick bowlers to South Africa in the original squad but there’s no issue with the squad containing six pace bowlers. I’m pleased to see Rahat Ali’s name in the squad as I believe he is a bowler who has a lot of potential.

Nine batsmen in the squad

My surprise though, is with the number of batsmen in the squad. Why so many? By taking so many batsmen you are showing your vulnerability and lack of faith in your front line batsmen. What needs to be done is that you back your top six for the series, show faith in them and ask them to put 250 runs as a minimum on the board and then back your bowlers to get the opposition out for less than that – a simple yet effective plan.

Afaq and Ayub were selected for the Test series in Sri Lanka, what did they do wrong? This is where our selection committee lets themselves down by picking players, not giving them a chance and then dropping them. Afaq did not play in Sri Lanka, so what did he do wrong? Ayub looked compact in Sri Lanka and I was impressed by him, he deserved at least another chance. He played one match and was then dropped. That sends out completely the wrong message to Pakistani cricketers and increases the pressure on them to perform on debut.

The lack of a leg-spinner

Pakistan has only won twice in South Africa in Test matches and the victories were reliant upon a good blend of fast bowlers with, Shoaib Akhtar featuring in both the Test victories. Also, in both victories the performance of a leg-spinner was important for Pakistan with firstly Mushtaq Ahmed and then Danish Kaneria performing very well. The lack of a world-class leg-spinner could hurt Pakistan’s chances in South Africa. With no leg spinner there, Saeed Ajmal is going to have to bowl really well against a classy South African top order and Pakistan skipper Misbah-ul-Haq is going to have to rotate his bowlers and utilise them very well.

How Misbah uses Mohammad Irfan could be key to Pakistan’s chances. Irfan’s fitness levels mean that Misbah needs to come up with a plan for him. You cannot expect 20-plus overs in a day from Irfan Misbah’s best policy should be to use him as an attacking option, as a strike bowler in several short three or four over bursts bowling at full throttle.

Balancing defence and attack with the ball

Over-attacking with the ball could lead to Pakistan’s downfall and lead to South Africa scoring freely. One of the Pakistani bowlers is going to have to perform a defensive role with the ball. I think not only will Saeed Ajmal’s wicket-taking ability be important for Pakistan, but his ability to keep the scoring rate down will be crucial. In this bowling attack Ajmal’s role is a dual one, as it’s unlikely that his spin partner Abdur Rehman will feature in the Test series.

The selection of Sarfraz Ahmed over Adnan Akmal is interesting, but the fact is that both are competent with the gloves and both are gritty batsmen who are more than capable of making runs down the order. It’s a close call between both wicketkeepers and Sarfraz hasn’t performed badly when he’s been given a chance. The Test series in South Africa presents Sarfraz with the ideal opportunity to establish himself as the No 1 one wicket-keeper batsman.

I’m not sure about Taufeeq Umar’s injury situation and I appreciate that Mohammad Hafeez and Nasir Jamshed did well in the practice match in East London, but my choice to open the innings in Johannesburg would be Taufeeq Umar and Mohammad Hafeez. Taufeeq has a good record in South Africa and the opening partnership is an established one and has been doing very well of late. However, that is not to say that Nasir Jamshed should not be in the Test side, I think there is a spot for him in the team.

Weaknesses will be exploited by the South Africans

The South Africans are a very efficient team and on their own territory and the Pakistanis are going to have their work cut out to match Smith’s team. Pakistan need to prepare well for Johannesburg and coach Dav Whatmore’s input leading up to the opening Test match will be vital in getting the boys ready for the series. Pakistan gave a mixed performance in the warm-up match and any weaknesses and loose ends in the Pakistan side will undoubtedly be pounced upon by the South Africans. It’s time to stand up and be counted now. Conditions will be tough, but the Pakistani batting unit if they are prepared well can make life tough for the South African bowling unit.

The series in South Africa will be a severe test of Misbah-ul-Haq’s captaincy. Most of the matches he has led Pakistan in have been in Asia, the Middle East and the Caribbean where wickets are almost like Asia nowadays. This series will ultimately test Misbah’s leadership skills, particularly given he will be using three fast bowlers, rather than having the luxury of playing two spinners in his side. I’ll be watching Misbah very closely and will be intrigued with how he utilises the three pace bowlers at his disposal. This is unfamiliar territory for Misbah and territory where he will need to lead from the front.

Positivity rather than aggression

When playing against South Africa I hope the Pakistani’s do not become too worked up about being aggressive and lose focus. I want them to be positive rather than aggressive. There are going to be periods during the series where Pakistan is going to have to absorb pressure, be on the back-foot and then counter attack when the time is right. You are playing against the No 1 side in the world, they are not going to be pushovers and Pakistan need to realise that there are going to be sessions where they will have to play defensive and clever cricket, rather than go out there all guns blazing.