With Mitchell Starc joining the list of injuries there are pressing concerns over the fitness of the Australian fast bowlers. 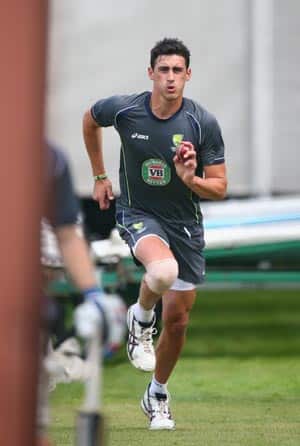 There was a talk of how Ryan Harris has never played more than three Test matches in a row, indicating his fitness standards. It was the first time in his career that the Australian pacer played four Test matches on the trot. But after featuring in four straight Test matches, Harris has suffered yet another injury which puts a question mark on his career. With Mitchell Starc joining the list of injuries there are pressing concerns over the fitness of the Australian fast bowlers.

Starc’s stress fracture on the lower back is a worrying sign and literally “an eye-opener” for Cricket Australia (CA). Here’s a man who took 11 wickets in the recently concluded Ashes 2013 series, while playing only three Test matches. He is only 23 years of age and he is touted as a vital cog in the Australian pace battery. But the untimely injury has hit him at the wrong time. Australia are seeking stability in the Test team and so far the fitness of the fast bowlers, form of the spin bowlers and volatility in the batting department has compounded their problems. The recent loss at the Ashes came after the 4-0 drubbing they got from India earlier this year.

Looking at Starc’s case he has bowled about 352 overs in Test cricket, close to 146 overs in One-Day International (ODI) cricket and nearly 40 overs in Twenty20 Internationals. Consider the domestic cricket that he plays and there you have got the answer, or have you? Playing Starc in all the formats of the game, in the tightly packed schedule might be the reason for his injury.

By the age of 23 there are hardly any bowlers who have bowled close to 408 overs in the history of Australian cricket. CA stressed on that precise point. The demand of international cricket is primarily responsible for reasons why there is a wear and tear in the body at a young age.

Take the case of Harris — since 2010 — when he made his Test debut he has bowled close to 408 overs. The body has been subjected to numerous injuries — hip injury, broken ankle, knee injury, Achilles heels and shoulder injury as well.

So what could be done to manage the bowlers? CA has come up with an initiative. The current domestic season will have separate blocks for three formats of the game. That is a good move considering the fact that the players adapt themselves better to one format. For bowlers particularly this is a great move. Imagine bowling in a four-day game and after three days turning up for a T20 game. That upsets the rhythm of the bowlers and the confidence also might get affected.

Also the International Cricket Council’s (ICC) Future’s Tour Programme needs a close monitoring. The ODI tour to India before the return Ashes might be a great move financially but it would have been so much better if the players would go and ply their trade in their domestic First-Class competition — The Sheffield Shield.

The Australian assembly-line of fast bowlers have shown a similar pattern: showing a lot of promise, inducing optimism and then getting lost in obscurity. Pat Cummins and James Pattinson suffered injuries similar to Starc. Cummins’ only Test match was a brilliant one in which he got a six-for as an 18-year-old. After that he made sporadic appearances for Australia in ODI and T20 cricket. He was also part of 2012 World T20 squad. After showing his class with the ball he was expected to be torchbearer of Australian fast bowling but fate intervened. While playing for Sydney Sixers he injured himself yet again.

Jackson Bird flew home during the Ashes due to lower back soreness. There are many other examples.

So what could be the plausible solution to address this problem?