On August 17, 2002, 19-year-old Mithali Raj, three Tests old, went on to break Karen Rolton's record of the highest individual Test score of 204, by scoring 214. Since then, Mithali has grown into a world-class cricketer, becoming the captain of the Indian national team, leading the side to two Asia Cup victories and creating many more records. Sudatta Mukherjee remembers the exuberant performance of the teenager that cheered up the Indian women's team, who had had a bad tour of England. On August 17, 2002, 19-year-old Mithali Raj, three Tests old, went on to break Karen Rolton’s record of the highest individual Test score of 204, by scoring 214. Since then, Mithali has grown into a world-class cricketer, becoming the captain of the Indian national team, leading the side to two Asia Cup victories and creating many more records. Sudatta Mukherjee remembers the exuberant performance of the teenager that cheered up the Indian women’s team, who had had a bad tour of England.

The India Women in 2002 flew to England to play a tri-series against the home side and New Zealand. They lost the first three One-Day Internationals (ODIs) and the last one was abandoned. Few days later they played against an England Development XI and defeated the home side by 53 runs, boosting their morale after the tri-series loss. However, three days of heavy rain spoiled India’s chances of winning the first Test and as a result the two sides agreed to play an ODI at Beaconsfield Cricket Club on August 11. Misery continued for the Indian women. They were defeated by England by six wickets in the compensatory ODI.

England were in full confidence after defeating India in the tri-series and the one-off ODI. India had to nothing to lose and Somerset chief was happy to host the final Test, hoping that both the sides enjoyed the match. Indian captain Anjum Chopra won the toss and elected to field. India started on a bright note, dismissing Charlotte Edwards. However, Claire Connor, Laura Newton and Mandie Godliman piled on the runs as England ended their first innings score for 329. Neetu David and Jhulan Goswami were pick of the bowlers, picking up four and three wickets respectively.

The Indian openers were dismissed cheaply. Anjum Chopra smashed a half-century before leaving it all to Mithali Raj and Hemlata Kala. Mithali and Hemlata continued their partnership the next morning.  Mithali was unbeaten on 43 and Hemlata on 31.

Ten years later, Mithali said, “As a player I was still very raw in terms of experience, so maybe only thing was it was a Test match and in those day scoring 50 or 60 was a big thing, so we used to think that when I go to bat I should score a half-century. But that Test was something very different, there are so many things in the team you know, the composition of the team demanded that I stay there irrespective of what the total is, individual or the team’s is. So it was more of staying there than scoring runs.”

A shy girl from Hyderabad, Mithali let her willow do the talking as she went past Sandhya Agarwal‘s 190, the previous highest individual score record by an Indian, which the latter had scored in 1986. She continued her form even though Hemlata was run out by Edwards for 62. Soon, she crossed Rolton’s Test record of 209. Mithali, in an interview to CricketCountry said, “I was too young at that time to actually realise about the record. It was our tour manager who sent a message through the 12th man to tell me that 209 was the previous record. That’s when I realised. Otherwise I didn’t have the faintest of idea. When I broke the record, more than anything else, I was too tired after batting for long. But it always feels good to break any kind of record.”

“This is my first Test in England. I was nervous in the 90s. Once I completed my first century, I started to play shots with confidence. Then I returned to the ‘nervous 190s’, before creating a world record in the last ball bowled in the day,” Mithali was quoted as saying by The Hindu.

Next morning, she returned and could add only four more runs. She faced 207 balls in her innings and smashed 19 boundaries, playing for almost 10 hours. Her partnership for the seventh wicket with Jhulan (62) is a world record. India took a lead of 138 runs after first innings. In the second innings, Edwards’s half-century helped the home side end the Test in a draw. It was due to Mithali’s double century, for the first time in the tour, that India found themselves in the driver’s seat.

Interestingly, it was the same venue where Rahul Dravid and Sourav Ganguly had blasted Sri Lanka’s bowling in 1999 World Cup match. Mithali was promised a prize of £5 by team manager for scoring a century. She got a tenner instead.

Speaking about the reception she received after her majestic record, Mithali said, “That was the last Test and India really didn’t do very well in the one-dayers, so it was saving grace for us to draw the Test. And the 214 probably overshadowed the bad performance of earlier matches. But when I got back I really didn’t think that I would be received in such a manner because I normally don’t speak too much to my parents when I’m touring, unless it is very important to talk to. Those days women’s cricket was under WCI (Women’s Cricket Association of India); it wasn’t under BCCI (Board of Control for Cricket in India), so we had to travel by train, where I had a huge reception at the station. It then hit that it is a huge thing and so many people had come to receive me. My mom never comes to receive me, but she came on that occasion. So it was very emotional.”

Hyderabad at that time held the prestige of producing some of the best batsmen in the world: from ML Jaishima to Mohammad Azharuddin to VVS Laxman. It was time for a woman cricketer to enter the list. In 2001, a Hyderabadi scored the then highest individual Test score by an Indian — Laxman’s 281 against Australia in Kolkata. Now it was Mithali, who entered record books.

Mithali makes batting look easy and is one of the thinking cricketers. Having started her career with stalwarts like Purnima Rau, Anjum Chopra and Anju Jain (for Air India), she emerged as one of the leading cricketers in the world. 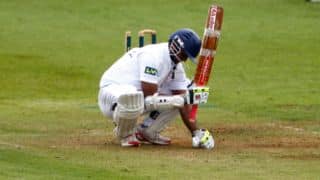