Moeen Ali speaks about his performance against Pakistan, Misbah-ul-Haq's incredible form, Mohammad Aamer's comeback to Tests, the upcoming tours of Bangladesh and India, and much more.

Currently regarded as a key middle-order batsman for England, Moeen Ali has wasted no time in establishing himself in both the Test and limited-overs formats. Apart from his batting, the spin option provided by Ali, as was apparent in the recently concluded Test series against Pakistan, is another reason for his success at the international level. In 30 Tests, he has picked up 77 scalps whilst scoring over fourteen-hundred runs.

In an interview with PakPassion.net, the 29-year-old spoke about his performance against Pakistan in the recently concluded Test series, Misbah-ul-Haq’s incredible form as well as Mohammad Aamer’s comeback to Test cricket, discussed England’s great form in One-Day cricket and looked forward to his participation in the upcoming tours of Bangladesh and India.

PakPassion (PP): Do you think 2-2 was a fair outcome in the recently concluded Test series against Pakistan?

Moeen Ali (MA): Yes I think in the end it was a very fair result. Pakistan were very good actually. They played brilliant cricket and probably played better cricket than us in general. In the Old Trafford game we outplayed them but I think 2-2 is a fair outcome for the series.

PP: I guess from a player’s point of view it was good to be involved in a competitive series rather than a one-sided one?

MA: Definitely. We got challenged very well by Pakistan who played excellent cricket with a blend of experience and some good young players. It was a great series to be involved in, the weather was nice and the fans enjoyed the series. From a Pakistani perspective, Misbah-ul-Haq led the team brilliantly in terms of his batting and also his captaincy.

PP: You must be very pleased with your performance with the bat during the series where you averaged in excess of 60?

MA: It was nice to score some runs especially after the first Test at Lord’s where I went for a big shot. I was a bit down after that but then I worked hard on my batting and in the end, I was actually quite pleased with the way I played during the rest of the series.

PP: The Pakistani batsmen had a specific plan against you. How happy were you with your bowling performance against Pakistan?

MA: I actually feel that I bowled decently but the way the Pakistanis played me, it made it difficult for me to bowl at them. The thing is we have four brilliant seamers which means the opposition is always going to come after me, so that makes it tough in itself in the first place but I picked up vital wickets here and there which was good. I am still learning a lot when it comes to my bowling and I feel that I am a batsman who bowls a bit. I feel that I am learning and improving and I was speaking to the Pakistani batsmen at the end of the series about my bowling and asking them where they felt I could improve as a bowler and they gave me some advice, which was good of them.

PP: You worked briefly with Saqlain Mushtaq during the series; do you believe that was beneficial for your bowling?

MA: Working with Saqlain was one of the best things that has happened to me. He was brilliant tactically and mentally. He focused mainly on the mental aspects of bowling and did not say much about the technical side of the game as he was obviously only there for a short period. Most of his advice was about tactics, field placing and about the opposition batsmen that I was up against. I feel that he has improved my bowling a lot and I am looking forward to hopefully working with him again in future, as he has been amazing in the work he has done with both Adil Rashid and myself.

PP: At the age of 42, Misbah-ul-Haq is still going strong in Test cricket for Pakistan. What do you make of his achievements and him as a person?

MA: He is amazing. All of the England players have a lot of respect for him. He controls the Pakistan team and the way he leads the team just commands respect. At 42, he is still churning out the runs and the way he batted actually surprised a lot of us. We knew that mentally he is tough and very good but what was impressive was the way he played so late. He is an outstanding player and he has been brilliant for Pakistan cricket.

PP: Younis Khan struggled in the first three Tests but showed his class at The Oval. What can batsmen around the world learn from watching Younis batting?

MA: There is a lot to learn from Younis Khan. We knew that even though he was struggling but as with class players and players who have scored a lot of runs in the past, you know that they will always come good at some stage in the series. The double hundred that he scored was obviously fantastic. In many ways, he is like Misbah; at that sort of age where he just churns out runs all the time. The likes of Younis and Misbah are very difficult to bowl at when they are playing well. The best thing about Misbah and Younis is that they are nice people and I have a lot more respect for guys like that.

PP: There were some calls for Mohammad Aamer to be handed a life ban from cricket. How did you feel playing against someone who had been involved previously in spot-fixing?

MA: He was always the danger bowler for Pakistan. I feel that he bowled fantastically well and I know that he never got the rewards his bowling deserved due to catches being dropped off his bowling. He is still a super bowler and I feel he will get better, the more Tests he plays. It is good to see him back in international cricket as he is a top bowler. I got to know him over these past few weeks and he is a really nice guy. There were no problems from our side with Aamer being back in international cricket.

We spoke about it before the series and felt that everyone makes mistakes at some point in their lives. Aamer also made his mistake and he served his time out of the game. Once he was back playing against us, we respected him as a person and a cricketer. There was nothing against him from our side and he just put his head down and concentrated on working hard for his team. He was a big part in why Pakistan drew the Test series.

PP: On the field you always show great sporting spirit such as applauding fifties and hundreds. Is that difficult to do in the modern day, where it is win at all costs way?

MA: You see the effort and the delight on the opposition faces when they reach landmarks and it is always nice for them. I think there are still a lot of players who do what I do. We as an England team do that and I know New Zealand do the same thing. I also saw a lot of the Pakistani players do that especially Sarfraz Ahmed. I think it is good for the game and yes you are always trying to get people out but if someone has got a hundred against you then there is nothing wrong in showing some appreciation. If someone comes from abroad and makes a fifty or a hundred against you especially in England then I think that is a big achievement.

I have been raised that way to appreciate the achievements and respect the opposition and it just comes naturally to me. I think the vast majority of people in the game of cricket are good sports and it is just a minority who are not.

PP: How did it feel to be in the unusual position of being cheered by both sets of fans during the Test series against Pakistan?

MA: I absolutely loved it. I did not expect it. I was not sure what the reaction from the Pakistani fans would be, but to get cheers from both sets of fans was fantastic. The Pakistani supporters were brilliant with me and I appreciate that from them. I would like to thank all the fans from both sides for their support.

PP: Looking ahead at your Test future. Where do you see yourself batting? I take it you would eventually like to be given the opportunity to bat higher up the order. In addition, do you think you can develop into a front-line spinner?

MA: Yes absolutely. I am trying to move up the order but to do that I have to be scoring runs consistently. In that respect, towards the end of the Test series against Pakistan I feel that I was getting there. All I need to do now is to keep on repeating those sort of performances. With the bowling, I have to bowl a lot tighter and find a way to be more defensive with my bowling so that I can restrict the scoring when the opposition is looking to attack me and be able to bowl to more defensive fields when needed. I feel that I have more of a plan now with my bowling and I also feel that I learnt a lot from home and away series against Pakistan.

PP: It must be great being part of the England limited-overs unit at the moment?

MA: We feel it and we are playing very well now, and we have a lot of guys who are in very good form. There are also some terrific players who cannot get into the side at the moment, like Jonny Bairstow. Right now we are in a good place, playing some good cricket and we need to keep this going. We had a change of mindset and it’s working and we just need to look to get better in each game.

PP: Bangladesh and India this winter. Interesting and challenging series no doubt?

MA: Yes, they will present a different type of challenge to our home conditions of course and also it will be a different style of cricket, a much slower type of cricket but I am really looking forward to this challenge. As a team, we are aware that we need to prepare really well for it. We undoubtedly have a good side and hopefully we will be alright, especially given we have so many good all-rounders which should ultimately make a big difference. India looks a very difficult place to play and it will be a tough challenge for all of us. It will obviously be different to the UAE where we played against Pakistan but we are confident and as long as we prepare well, we will be fine. 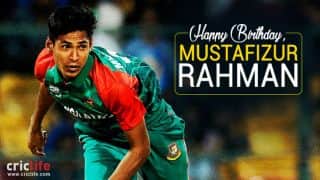