On February 1, 1985, Mohammad Azharuddin turned a ball to square-leg to reach his third century on the trot since debut. Arunabha Sengupta remembers the fabulous start to his cricketing career.

In the course of one month, Mohammad Azharuddin had captured the imagination of the country.

On the last day of 1984, he had announced himself with a rasping drive through the covers at Eden Gardens. The debut century had followed, crisp and classy, after several rain interruptions and an interminable rest day. The cricketing world had sat up to take notice of the springy footwork and the nimble artistry of his strokes. From the very first moment on the field, he radiated brilliance. He was special, lovingly touched by genius.

At Chepauk, as India lost the fourth Test to trail 1-2 in the series, his effort had been akin to a ballet on the burning deck. The second successive century had seen his magnificence on the on-side punctuated by some scintillating square cuts, each stroke bearing the stamp of god-gifted ability. And all of it was scored after coming in at 22 for 3, with innings defeat looming in front.

In between the fourth and the fifth Tests, he had delighted the cockles of even more hearts with two sublime cameos in a couple of One-Day Internationals. They had been two gems of fluid strokeplay, both amounting to 47, one complete and one unbeaten, both breath-taking in their ethereal beauty while ruthlessly plundering runs. Even when he lofted two sixes over mid-wicket, they were more like the brushstrokes of calligraphy rather than blows of a damaging weapon. Rhapsody with rapid-fire.

And now, at Green Park, Kanpur, he was promoted to number three, an out-of-form Dilip Vengsarkar pushed down the order. Captain Sunil Gavaskar, himself having a torrid time in the series, had his stumps uprooted by a Norman Cowans break-back, and Azhar walked in early to rousing cheers around the stadium.

Krishnamachari Srikkanth was going strong at the other end, and Azhar settled down to demonstrate some fascinating wrist-work against the spinners Pat Pocock and Phil Edmonds. Srikkanth, dropped twice in the innings, walloped the ball whenever humanly possible – and slashed gamely when not. In contrast, Azhar was class itself. He picked up gaps with remarkable ease, bisecting the fielders by sending balls to uncanny angles, with the youthful spring of the step followed by the manoeuvrings of those wrists.

The pair added 150 in just 37 overs before Srikkanth flashed at Neil Foster to get an edge. With the dismissal the momentum of the innings was lost. Mohinder Amarnath batted over an hour and a quarter for a painstaking15, and Phil Edmonds tied the batsmen down to near scorelessness with some accurate left-arm spin.

Azhar, who had posted his fifty in quick time and was steadily approaching an unprecedented third straight hundred since debut, suddenly found it difficult to score. Having reached 90 with an hour’s play still left in the day, he could add only eight more before close.

Off the last ball of the day, Dilip Vengsarkar pushed one to cover and scampered a single — thus ensuring that the young man did not have to come out and face the first ball the next morning. Vengsarkar and Azhar did not often see eye to eye down the years, but that day one had to applaud the gesture of the senior pro.

Third century on the trot

Unbeaten on 98, Azhar later claimed in an interview that he had slept ‘aaram se’ that night (soundly and without a care).However, the same was not true for his growing number of fans who waited with bated breath for the morrow.

And in the fourth over of the morning, the Hyderabadi turned Neil Foster off his hips to square leg for a brace to reach his landmark. Off came the helmet, the bat was raised and the eyes looked heavenwards — gestures to be repeated on many more glorious moments in the career of this gifted batsman.

Hundred accomplished, Azhar blazed away for a while before pulling a harmless short ball from Chris Cowdrey into the hands of mid-wicket. Azhar walked back to standing ovation, the 122 runs compiled in six-and-a-quarter hours with 16 superlative hits to the fence.

Vengsarkar roared back into form, scoring a well-paced century and celebrating it by taking three consecutive boundaries off Edmonds. India batted into the third day to pile up 553.

However, on a slow, dry pitch, England batted long enough to drag the game towards stalemate. Debutant off-spinner Gopal Sharma, the first player from Uttar Pradesh to represent the nation since the infamous Maharajkumar of Vizianagaram, picked up three quick wickets to provide a glimpse of hope.

When India batted again, on the final day, Azhar played another superb little innings. Nonchalantly lifting balls into the crowded outfield, he reached his 50 in just 38 balls, and remained unbeaten on 54 from 43. India declared after just 13 overs at 97 for 1.

England, however, had no intention of chasing down the 234 runs off the available 46 overs. They finished at 91 without loss to take the series. 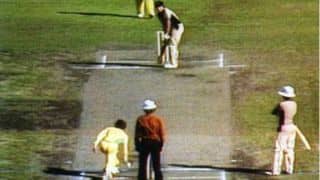