Raman Lamba's injury meant that Mohammad Azharuddin would go on to lead India almost through the 1990s, making them invincible at home and vulnerable overseas. Azhar would also succumb to temptations away from the field...

Two teenagers Sachin Tendulkar and Waqar Younis made their Test debuts on November 15, 1989. However, another event of significance happened in the same Test as Mohammad Azharuddin replaced an injured Raman Lamba. The incident went on to define Indian cricket in the next decade, as Abhishek Mukherjee narrates.

November 15, 1989 stands out in cricket history on its own accord. Seldom have two men of such stature Sachin Tendulkar and Waqar Younis debuted together on opposite sides (though Wilfred Rhodes and Victor Trumper immediately come to mind).

Indian cricket fans also remember (or they ought to, at least) for a different reason as well. This is about that.

Once hailed as the wonder-boy of Indian cricket (or indeed, world cricket), Mohammad Azharuddin had been going through a slump.

Azhar s entire career would witness inexplicable slumps and exhilarating highs. His hundreds would always come in clusters, and these clusters would typically be separated by long, barren phases. But that trend was yet to be spotted.

At this point Azhar had not scored a hundred in almost three years. A more worrying aspect was his exposure against quality fast bowling: the West Indians had tormented him, away and home, and his 6 Tests against them had yielded a solitary fifty.

No, he was not expected to deliver in Pakistan, with Wasim Akram approaching his peak, Imran Khan still potent, and budding fast bowlers always on the fringes (as in the case of Waqar here).

The focus was on Raman Lamba instead. Lamba s fans always felt he got a raw deal in Test cricket. True, he failed against West Indies in Delhi in 1987-88, but India were knocked over for 75 in the first innings that day. That was his only real failure, and he never played again.

As in the case of Azhar, there was no doubt about Lamba s talent. They were dissimilar, and yet there were aspects common to them: both played exhilarating strokes that left viewers gaping; both were electric on field; and both walked with the swagger natural, not choreographed that would not have seemed out of place in a Bollywood blockbuster.

Lamba had seemed to fade out after his stunning debut series, against Australia in 1986-87. Nehru Cup 1989 saw him emerge again, as a reincarnated avatar of sorts. This Lamba mixed power with caution. He scored more runs (231) than any Indian in the tournament (the next highest was 182). His finest, a 63-ball 57, came against Pakistan at Calcutta.

India had three all-rounders in Kapil Dev, Ravi Shastri, and Manoj Prabhakar. The ever-improving Sanjay Manjrekar would bat at 3. There was no Dilip Vengsarkar. Tendulkar was slated to make his debut in the first Test, at Karachi.

This meant that there was only one available slot in the middle-order. They opted for Lamba, demoting Azhar to 12th man.

The injury and the catches

Has there been a more significant injury in the history of Indian cricket? Lamba reported unfit on the morning of the Test with a sore toe. Azhar was named in the XI. Lamba would not play another Test, and his ODI career would end after the tour.

As I have mentioned before, India did not get to see Tendulkar s Test debut because of elections. Thanks to the internet, however, we got to see the five spectacular catches that went on to define Indian cricket.

Ten minutes into the match, Aamer Malik edged one off Kapil. Azhar, crouched low at second slip, dived to his right and came up with a low catch.

The score ambled to 158 for 2 before Shoaib Mohammad had a slash outside off, again off Kapil. The ball dipped to Azhar s left this time, and almost pierced first and second slips. Azhar held it with both hands.

The next catch gave Salil Ankola a third debutant (Shahid Saeed was the other) his maiden Test wicket. Saleem Malik pulled a bouncer; there was nothing wrong with the shot barring the fact that Azhar, at wide mid-wicket, somehow managed to shove his fingers under the ball and roll over.

The fourth was the easiest of them all ( he made it look easy is perhaps the right way to describe it): Azhar, at wide second slip, merely dived to his ride to catch Javed Miandad off Kapil.

The fifth was not meant for Azhar. It was definitely closer to first slip than second after Wasim Akram tried to smash Prabhakar. But Azhar dived, caught it in one fluid motion, and stood up in front of first slip. Yes, he did equal the world record for most catches in a Test innings.

Pakistan dominated for most parts of the Test. They got a 147-run lead and set India 453 in four sessions. India finished on 303 for 3. Azhar scored 35 in each innings. That, along with those catches, was enough for him to be retained. He scored a hundred in the next Test, and 77 and 52 in his next two innings.

Legend goes that Raj Singh Dungarpur, then Chairman of Selectors, approached Azhar during a domestic match a few days later with the historic question: Miyan, captain banoge? (Do you want to lead, mate?).

Azhar was captain of the Indian team that would leave for New Zealand two months after the Karachi Test. He had led only 4 times in First-Class cricket till then, all of them after returning from the Pakistan tour.

He would go on to lead India almost through the 1990s, making them invincible at home and vulnerable overseas. He would also succumb to temptations away from the field, but this is not the place for that. 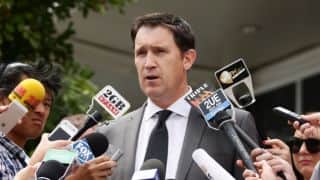