Born on September 5, 1970, Mohammad Rafique turned out to be one of Bangladesh’s best in the last couple of decades. With more than 1,000 runs with the bat and 100 wickets with the ball in Tests and One-Day Internationals (ODI), Rafique went down as one of the best to have played for the Asian minnows. Prakash Govindasreenivasan looks back at his 12-year long international career. 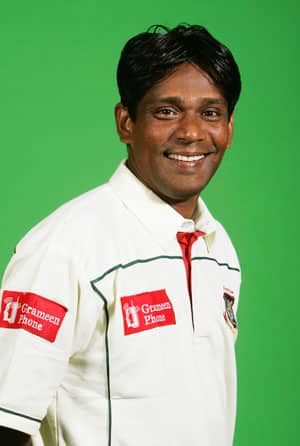 Born on September 5, 1970, Mohammad Rafique turned out to be one of Bangladesh’s best in the last couple of decades. With more than 1,000 runs with the bat and 100 wickets with the ball in Tests and One-Day Internationals (ODI), Rafique went down as one of the best to have played for the Asian minnows. Prakash Govindasreenivasan looks back at his 12-year long international career.
Rafique finished his career with astonishing statistics for someone coming from a minnow side. His slow left-arm orthodox bowling was good enough to entice some of the best in the business to go after him and lose their wicket. In the process, Rafique would concede a few extra runs, but his approach hardly changed. Spinners often caved in to pressure and bowled conservative line and length if things weren’t going their way, but Rafique often went that extra mile and kept bowling in a certain manner to invite the batsmen to make a mistake.

Rafique had a rather different beginning to his career. At the age of 15, Rafique started off as a medium pacer for Bangladesh Sporting, a second division side, and moved to Bangladesh Biman in 1988. There, under the able guidance and advice of former Pakistan cricketer Wasim Haider, Rafique turned into a slow left-arm orthodox bowler. And as the cliché goes, it turned out to be a life-altering decision.
Top Moments:

Malaysia hosted the ICC Trophy in 1997 — the qualification tournament for the ICC World Cup 1999. Bangladesh went on to win the tournament with Rafique playing a major role in the victory. Akram Khan-led Bangladesh faced a tough opposition in Kenya in the final. Steve Tikolo played a magnificent knock of 147 from 152 balls to take Kenya to 241 after an early top-order collapse. Rafique bowled six overs and picked up three wickets.

In their run chase, Rafique was sent to open the innings, keeping in mind that rain was looming large and the Duckworth-Lewis method could come into picture. The Bangladesh batsmen went out and played aggressively to stay ahead of the asking rate. Rafique blazed away to 26 from 14 balls before being dismissed by Tony Suji. Almost every Bangladesh batsman scored at more than run-a-ball. To their fortune, the play stopped right at the half-way mark with the score on 166 for eight. When rain ruled out further play, Bangladesh were crowned champions based on D/L method. Rafique finished the tournament with 19 wickets to his name.
Bangladesh’s first ODI victory

Rafique made his ODI debut in 1997 but rates Bangladesh’s first ever ODI win — over Kenya in 1998 in Hyderabad — as one of the highlights of his career.

It was a game that saw Rafique being promoted up the order to open the innings. Bangladesh were chasing a stiff total of 236 and needed a good start to give themselves a chance. Rafique provided that start as he and Athar Ali Khan added 136 runs for the first wicket. When Rafique fell for a brisk knock of 77 from 87 balls, Bangladesh were in a comfortable position and went on to win with two overs to spare. Rafique had earlier chipped in with the ball, finishing with figures of two for 56 in his quota of 10 overs.
The cliffhanger at Multan

Bangladesh came agonizingly close to getting one over their Asian compatriots Pakistan in the Multan Test in 2003. The visitors were 2-0 down and playing for pride in the final Test of the series. After posting 281 in the first innings, it was Rafique who brought the game to life with his wicket-taking spells. He and Khaled Mashud picked up nine wickets between them with the latter claiming the top-order and the former running through the tail. Rafique finished the innings with figures of five for 36 as Pakistan were bowled out for 175. Pakistan fought back and skittled out the visitors for 154. With more than a day and half to play, the game seemed in Pakistan’s pocket as they needed just 261 runs to win. However, the Bangladesh bowlers fought hard to push Pakistan to the brink.

Once the first-wicket partnership between Salman Butt and Mohammad Hafeez was broken, Bangladesh picked up wickets in quick succession to put an iota of doubt in the minds of the hosts. At 164 for seven, most would have expected Bangladesh to pull off the unthinkable. Shabbir Ahmed, however, stood his ground and gave company to Inzamam-ul-Haq. The skipper weathered a turbulent storm in the form of resilient Bangladesh side to score a century and take his side to a narrow one-wicket win. Bangladesh would have been proud and gutted at the same time. Proud to have pushed a stronger side that far for a win and gutted that they couldn’t go all the way. It would have been an emotional moment for an entire nation. It was Bangladesh’s first step in Test cricket. They faced India at home in 2004 and were off to a great start, scoring 400 runs in their first ever innings. Rafique’s first scalp in white flannels turned out to be Rahul Dravid, adding more value to his debut. India went on to win the game but it was a much-needed start for Bangladesh in the longest format of the game.
Test century against West Indies

On the hindsight, Rafique’s century down the order probably went on to save Bangladesh a Test match in 2004 as the game saw Chris Gayle produce a special knock. Bangladesh skipper Habibul Bashar won the toss and decided to bat first in the Gros Islet game. He starred with the bat, scoring 113 while Mohammad Ashraful chipped in with a gritty 81 from 224 deliveries. Alongside Ashraful, Rafique played a counter-attacking knock of 111 from 152 deliveries that helped Bangladesh post a first innings total in excess of 400 and eke out a draw.
All-round show in first Test win

Rafique put on an all-round performance in Bangladesh’s first Test win which came against Zimbabwe in Chittagong in 2005. Batting first, the hosts amassed 488. Batting down the order, Rafique made a quintessential contribution with 69 from 98 deliveries. In reply, Zimbabwe were bowled out for 312 as Rafique picked up a fifer. This bowling performance helped Bangladesh take a massive first-innings lead and go on to win the game by 226 runs.
Nine wickets against Australia

In a Test match against Australia at Fatullah in 2006, Bangladesh came close to another unexpected victory. They posted 427 via century  from Shahriar Nafees and solid knocks from Rajin Saleh and Bashar.

In reply, Australia were in all sorts of trouble as Rafique ran riot. He struck in his very first over of the game to remove Damien Martyn and looked to be in fine form. Adam Gilchrist bailed out Australia with a splendid knock of 144 and yet the visitors could only manage 269 runs on the board, with Rafique finishing with figures of five for 62. The Australian bowlers worked harder in the second essay and bowled out the hosts for just 148.

The target was 307 but the visitors had more than five sessions to get it. With enough time at their disposal, Australia had a solid start. A 109-run stand for the second wicket between Matthew Hayden and Ricky Ponting almost put the game beyond Bangladesh’s reach. Or so the Australians believed.

Hayden’s run out triggered a flurry of wickets. From 183 for three, Australia were reduced to 231 for six. Rafique ran through the Australian middle-order to bring his team back into the game. Yet again, it was the opposition skipper’s grit that proved to be a stumbling block for Bangladesh. They managed to pick seven wickets but failed to go any further as Ponting finished unbeaten on 118. Australia pulled off a narrow three-wicket win while Rafique ended the game with his career-best figures of nine for 160.
World Cup 2007 upset

After multiple attempts, Bangladesh finally pulled off an upset. This time, it came in the limited-overs format of the game. In the 2007 World Cup played in the West Indies, Bangladesh tamed their Asian neighbours India to register a surprise five-wicket win. Indian skipper Rahul Dravid won the toss and elected to bat first on a tricky wicket that had something in it for the bowlers. Mashrafe Mortaza gave his side an early advantage by dismissing Virender Sehwag in the second over of the match. Robin Uthappa too fell in the seventh over. When Sachin Tendulkar was dismissed in the 15th over with the score at 40, Bangladesh could smell blood. Sourav Ganguly and Yuvraj Singh attempted a rescue act with an 85-run stand for the fifth wicket. However, Rafique came back to break the partnership. He dismissed Ganguly for 66 and followed it up with wicket of Mahendra Singh Dhoni, who fell for a three-ball duck. Harbhajan Singh and Ajit Agarkar followed suit and India were bowled out for 191. Any hopes of dismissing Bangladesh were quashed early on by Tamim Iqbal who took the attack to the Indian bowlers. Half-centuries from him, Mushfiqur Rahim and Shakib Al Hasan saw Bangaldesh register a comfortable five-wicket win.

In 2008, he announced his retirement after being ignored for selections. He, however, made a grand exit after picking his 100th Test wicket in what proved to be his final Test match. It came against South Africa at Chittagong where Robin Peterson became his 100th scalp.

After retirement, Rafique tried to ply his trade in the Indian Cricket League (ICL) and was subsequently banned for 10 years by the BCB.

Bangladesh have always played fearless cricket. They have retained their ‘minnows’ tag since the time they started playing, but their steely resolve and sheer determination often made oppositions stand up and take notice of them. There have been occasions when their side has given some of the best teams in the world a run for their money. Rafique has been an integral part of this setup.

“The fans have given me lots of respect and love. I don’t know whether I have been able to repay a part of it. I want to keep myself associated with cricket to help Bangladesh break into the top five cricket nations of the world. That’s my dream; hopefully I will be able to see that come true in the near future.”

These were Rafique’s words after his retirement. Such was his commitment and belief in himself and Bangladesh cricket.