The right-arm Pakistan pacer made his international debut with a Test against New Zealand in New Zealand and displayed a class act of bowling.

Born on February 24, 2016, Mohammad Sami was one of the most promising bowlers of his time. The right-arm Pakistan pacer made his international debut with a Test against New Zealand in New Zealand and displayed a class act of bowling. However, his tendency to leak runs hampered his economy but scalping crucial wickets at right time, Sami has been one of the key players for the Pakistan team for almost a decade. On his birthday, Paulami Chakraborty lists five spells that speak about the milestones of the bowler s career.

Brilliant debut Test: Mohammad Sami was picked for the three-match Test series at New Zealand’s home ground and made his international debut on March 8, 2001. He scalped three wickets in the first innings with an economy of 2.21 while showed some unusual swing and got 5-for 36 with an economy of 2.40. Sami ended with 8 wickets in hand helping Pakistan clinch a 299 victory over the hosts.

Hat-trick in third Test: Sami took only three Tests to score his first hat-trick. After his successful debut against New Zealand, Sami was called up for the final match of Asia Test Championship where he took the first hat-trick of his career. The bowler got Charitha Buddhika and Nuwan Zoysa for lbw while Muttiah Muralitharan was bowled. Though Pakistan lost the match, Sami s performance was highly applauded. READ: Mohammad Sami: Pakistan pacer who was extremely quick and equally erratic

Hat-trick in ODIs: Sami went on to take the second hat-trick of his career in the second match of the Pakistan vs West Indies ODI series. Batting first, Pakistan had put up 232 while Sami came in the action and ended the WIndies chase at 181, taking Ridley Jacobs, Corey Collymore and Cameron Cuffy. With the hat-trick, Sami became the second person to score hat-trick in both Tests and ODIs after Wasim Akram.

3-for in ICC World T20: One of Sami s most impressive T20I performances came in the ICC World T20 2010 as he bagged three crucial wickets against Bangladesh. Sami first removed Shakib Al Hasan and then went on to dismiss Mahmudullah and Mushfiqur Rahim to complete his three wickets.

Surprise comeback to the side: After a gap of three years, Sami made a comeback to the national side in 2015 as he played an ODI and a T20I against Zimbabwe. He had put on weight and remained wicket-less in the ODI while got a solitary wicket in the T20I. 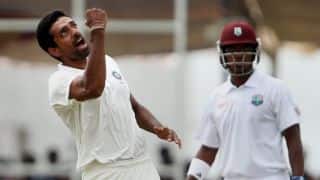