Mohammad Tauqir: West Indies will be under pressure, which will give us opportunity to play freely

Mohammad Tauqir: West Indies will be under pressure, which will give us opportunity to play freely

The United Arab Emirates (UAE) will play their last match of the ICC Cricket World Cup against West Indies at Napier. They are looking forward to register their first win and spoil West Indies’ chance to enter the quarterfinals.

The United Arab Emirates (UAE) will play their last match of the ICC Cricket World Cup against West Indies at Napier. They are looking forward to register their first win and spoil West Indies’ chance to enter the quarterfinals. On the eve of the match, UAE skipper Mohammad Tauqir spoke to the press.  (ICC Cricket World Cup 2015: Points Table)

Q: The West Indies were beaten by Ireland in the first match. Does that give an indication of perhaps yet another chink in the armour of this West Indian team that you can exploit?
Mohammad Tauqir (MT): Yes, definitely. I think they’re not playing as consistent cricket as they should be, but that’s an opportunity for us. But we need to bowl well. We need to play very good cricket to beat them. We know they are a good side, but we need to do our basic stride. We need to bowl well, bat well, field well to know. We have to play a very good cricket to beat them, but I can see that’s possible.

Q: You talk about the length of the tournament and a bit of fatigue creeping in. Would you care to reflect on what your personal highlight has been of the cricket World Cup, and perhaps what your team highlight has been to date?
MT: We started the tournament well, the two games against Zimbabwe and Ireland. I think we had one bad game against India, but I would say even two games against Pakistan and South Africa was a decent performance from our side. Although it has been a long tournament, but we were getting a few good breaks between the games. But everybody is fit and looking forward totomorrow’s game and to end this tournament on a winning note.

Q: What are your thoughts ahead of tomorrow’s game?
MT: I think we’ve been practicing positively, and we’re looking for a good performance and finishing on a high.

Q: Talking about the return to the point about this being the end of the tournament, what are your thoughts about transitioning back into day jobs in many respects for the squad?
MT: Our employers are waiting for us. We have Intercontinental Cup ahead of us in July and T20 World Cup qualifying. So this whole tournament and experience and event has definitely given us a lot of experience and has boosted our experience and confidence. So once we go back, we will be preparing for these upcoming tournaments.

Q: If you don’t win tomorrow, would you regard the tournament as less successful perhaps than you may have wanted it to be? What would define success for you at this event?
MT: I think win is important, but it’s not everything. I think playing good cricket is equally important, and we have been playing good cricket. I think this is such a game that luck also plays a very, very important role in winning the game. We had been a bit unlucky and a clear example of that is if you hit a stump and the bail did not come off, that’s a very bad luck. No, I think overall all the boys have done extremely well. Although we wanted to win one or two games, we came very close. But it didn’t happen. But we’re still looking forward to tomorrow’sgame and end it on a high.

Q: With respect to that point, is it therefore fair to say all of the pressure is on the West Indies tomorrow, and the UAE can play with greater freedom?
MT: I think they’ll be under pressure of chasing often run rate, and I think it gives us opportunity to play freely and express ourselves either batting or bowling. West Indies will be under the pressure of getting qualified for the knockout. 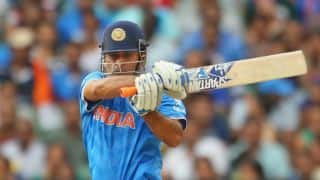