The national selection committee, it s now apparent, is nothing more than a rubber stamp. It has ornamental value, like the President of India, but no real powers. 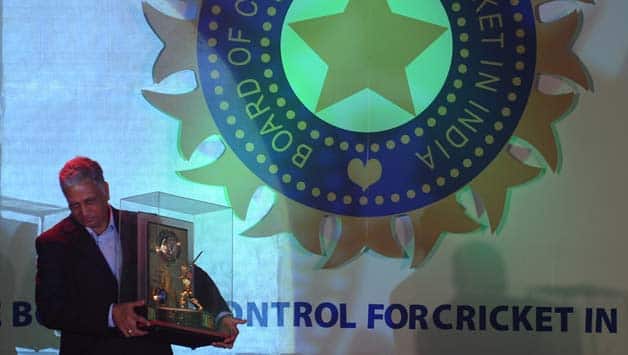 Mohinder Amarnath with the CK Nayudu Trophy for “Lifetime Achievement” and contribution to Indian cricket. This award was given to him by the BCCI in December 2009. After the pat on the back, came the kick on the backside in less than three years! AFP

The national selection committee, it’s now apparent, is nothing more than a rubber stamp. It has ornamental value, like the President of India, but no real powers. The selection committee does not have the authority to select the team it wants. Even if it does, the final seal of approval has to be got from the President of the Board of Control for Cricket in India. That this authority is mandated by law governing the apex body for the game in India is indicative of the extent of mockery cricket has been reduced to in India.

How the President of the board often a man who has risen to that position on the strength of his political muscle than cricketing intelligence, could overrule the collective cricketing wisdom of five men from the length and breadth of the country is beyond comprehension.

The convener at the selection committee is like a khabri for the BCCI president to protect his/BCCI interest. One can debate endlessly the selector’s decision in sacking Mahendra Singh Dhoni and bringing in tyro Virat Kohli as captain for the Commonwealth Bank (CB) series in Australia, but Srinivasan’s decision to veto the selectors proves that the national team selection is autocratic process under the garb of democracy.

It doesn’t require a Sherlock Holmes to tell us Dhoni’s proximity to Srinivasan. The Indian captain is also the captain of Chennai Super Kings the Indian Premier League (IPL) owned by Srinivasan. The BCCI president jumped into the fray to safeguard the cricketing clout of the CSK owner! Can there be a better example of conflict of interest being brazenly exploited!

“In the BCCI, one chap is omnipresent and no one can challenge him. I tell you that is not a good sign,” Bishan Singh Bedi said, without taking Srinivasan’s name.

It did not even matter to Srinivasan that one of the members of the selection committee was a cricketing legend whose cricketing acumen earned him the right to play for the country in 154 games spanning almost two decades. It’s the same man who was the chief architect of India’s epic World Cup triumph against all odds and expectations in 1983 and who overcame international ridicule as a soft target for fast bowlers to become arguably the finest batsman against pace. Mind you, Amarnath played in what was probably the greatest era of fast bowlers in cricket history, with the likes of Jeff Thomson, Andy Roberts, Michael Holding, Joel Garner, Malcolm Marshall, Imran Khan. Amarnath could survive the balls of fire on the field of cricket, but not the poison darts hurled at him by vested political interests. Amarnath had to make an unceremonious exit head high, as a martyr.

For a man who played much of his cricket when financial security from cricket was still far away, it was a blow below the belt to lose the well deserved chairmanship of the national selection committee and the opportunity to earn a none-too-small fee of Rs 60 lakhs per annum. What a way to thank a man who made our chests puff with pride with exemplary courage under adversity! Indian cricket has been shamed in the eyes of the world.

That the DDCA – the association for whom he played First-Class cricket – did not back him makes the betrayal even more tragic. All one can say: “Et tu, Brute!”

It was time for another Amarnath yatra! D j vu!

(H Natarajan, formerly All India Deputy Sports Editor of the Indian Express and Senior Editor with Cricinfo/Wisden, is the Executive Editor of CricketCountry.com. A prolific writer, he has written for many of the biggest newspapers, magazines and websites all over the world. A great believer in the power of social media, he can be followed on Facebook athttp://www.facebook.com/H.Natarajan and on Twitter at http://twitter.com/#!/hnatarajan )