Mohinder Amarnath has been rushed for treatment to the British Psychoanalytic Society.

Please note: This is a humorous piece — pure fiction.

After his claims that a captain should bat higher up the order,  Mohinder Amarnath has been rushed for treatment to the British Psychoanalytic Society. Arunabha Sengupta eavesdrops on the discussion between the two doctors assigned to the case.

“Unfortunately this is an advanced stage. More than half a century of trauma,” Dr. Travis Bernard observed sadly. In response his German colleague Dr. Carl von Humboldt leafed through the case history file.

“I see it was referred to Vienna,” he raised his eyebrows.

“Yes, it was decided that Mr. Mohinder Amarnath could not be helped by normal psychotherapy sessions. A team of analysts were needed, working round the clock, to ensure a slim chance of him getting better. The scars are too deep. But Vienna decided this team of doctors had to involve some experts on cricket. Mike Brearley was contacted and the case came over to the British Psychoanalytic Society.”

“Cricket?” von Humboldt sounded sceptical. “I have heard about Jonathan Trott and Marcus Trescothick, but this Amarnath has not played for almost a quarter century.”

“This is not a stress related case, doctor. This deals with classic symptoms of Father complex.”

“Father complex?” von Humboldt was unimpressed. “A game like cricket! What abnormality has he shown apart from claiming captains should bat higher than No 7?”

Bernard sat back in his chair and allowed his features to relax into a smile — a smile of understanding the inscrutable Englishmen always had for the befuddled continent dwellers.

“Cricket is not as bland and simple as you make it out to be doctor. It can be a complex social game. And the captain can very well take on the image or archetype of the father,” he paused before continuing in a hushed tone. “There is plenty of Freudian symbolism in the game. The bat handle is a typical phallic metaphor, especially with the rubber grip. And someone batting at No 7 or lower can be seen waiting in the pavilion, with the bat between his knees. Often with the handle under his chin or even nibbling it…”

It requires careful handling. For now, he will be allowed to watch only the Hong Kong Sixes — the six-a-side cricket tournament. No No 7. Ease him into the process. One will take a call after a steady diet of the fare

“But why should this Amarnath person become psychotic about the idea of a captain batting after the fall of five wickets?”

Von Humboldt flipped through the file. “You mean getting hit repeatedly on the head? With that shola hat? Is that the cause of all this madness?”

Bernard sighed. “No. The roots are from much earlier. Lala Amarnath was a near tyrant as a father, and forbade his sons to play anything but cricket. Games were played in their garden, and the encounters resembled military rather than family affairs. Amarnath senior planted pots around the field and the sons were thus instructed in the art of placement. And short balls were to be hooked, there was no other way of playing them. Doctor, I need not explain to you how childhood struggles against paternal authority results in negative father complex.”

“In addition, young Jimmy [Amarnath] saw his father captain the country, or heard about it. In most of the innings after his birth, his father was seen batting at No 7 when leading India. You realise? It bred this complex within him, against captains batting at No 7. And it hasreached fantastic levels.”

“Hmm,” the German analyst repeated, his brows knit in a tight frown.

“And later, if you see Amarnath’s own days, he played 69 Tests. Of them a whopping 27 were under Kapil Dev, who came in at seven or eight. And 19 more saw Bishan Bedi as the captain.”

“You mean the one who raised a hue and cry about Amarnath being sent here, insisting that an Indian psychoanalyst would have done a much better job?”

“The same, but we will discuss dementia later. Even if you look at the great years of Amarnath — actually there were only one and a half great years from 1982 to the middle of 1983 — in every case he was spurred by a similar return of the father complex. The rare positive effects of the condition.”

“Yes. Another captain who batted at seven or lower. So, Amarnath played with manic rage in Pakistan. When India went to West Indies, Kapil Dev was made captain. Another stimulant. Besides,” Bernard paused for effect. “Clive Lloyd batted 15 times at No 7 or below as captain — the highest number of times for a specialist batsman. There was a frenzy about Amarnath that made him score all those runs during the Caribbean tour. In the World Cup, it continued. If you look through his file, he was the Man of the Match in both semi-final and final. We have already discussed West Indies whom India met in the final.”

“The file says they played England in the semi-final.”

“Yes,” Bernard sighed ruefully. “They did. And guess who the captain was. Bob Willis. Isn’t the No 7 clear? But, the complex returned to negative when he went back to India. West Indies played them again, but he scored just one run in six innings. Proximity to home? The memories of childhood? Only many, many sessions can unearth the actual cause.”

“Yes. Dhoni has always been difficult for him to accept. A captain batting at No 7, another Indian who was the Man of the Match in a World Cup final. But, his peeves stemmed from a lot more.”

“After the trauma of dismissal from the selection panel, he underwent another bout of unpalatable fortune. He said Dhoni was not fit for the Test team, and the man went on to score 99 and 224 in the next two innings. You see, Amarnath’s own highest Test score is 138. But, still Amarnath could digest the setback because the two innings were both scored from number six. Then came the Ranji Trophy.”

“Yes. Karnataka won it. And their captain was Vinay Kumar, who batted at No 9. In the second innings of the final, the Maharashtra captain Rohit Motwani batted at No 7. In the semi-final, Punjab were led by Harbhajan Singh batting at No 8. In the quarter-final Railways were led by Murali Kartik, once again batting at No 8. Uttar Pradesh were led by RP Singh, batting as low as No 11. Even Mumbai was captained by Zaheer Khan at No 9. It was horror of horrors for Amarnath. All the scars came rushing back.”

“I see,” von Humboldt still seemed confused. “But, these players are bowlers, aren’t they? Surely even the biggest imbecile can’t expect them to bat higher up than the batsmen.”

“Yes, but there had been other instances down the years.Wasim Akram, Heath Streak, Daniel Vettori could be excused as bowling all-rounders, but what about Khaled Mashud, Adam Gilchrist, Andrew Flintoff? Every-time he saw them the negative complex returned. Ultimately, he had stopped watching the game altogether. He hardly ever turned up for matches even when hewas a selector.”

Von Humboldt nodded. The case was making sense now. “Brearley knows him, doesn’t he? He did play against the patient.”

“Yes, two Tests in 1979. He tells me that he had sensed something was wrong. He came down the order at number seven only at The Oval, after fully ensuring that Amarnath was not playing in the match. Otherwise, his excellent instincts told him to open with Geoff Boycott even though Graham Gooch was at hand.”

The German doctor pursed his lips. “What is the course of action now?”

“It requires careful handling. For now, we will be allowing him to watch only the Hong Kong Sixes — the six-a-side cricket tournament. No number seven. Ease him into the process. We will take a call after a steady diet of the fare.”

Von Humboldt nodded. “Right,” he said dropping the file on the table. “By the way, I just thought I would mention it. This patient always has a red handkerchief sticking out of his hip pocket. May not be important, but I would keep an eye on it if I were you.”

Bernard laughed. “That’s rather harmless. Just a genetic quirk.” The two doctors moved on to the next case. 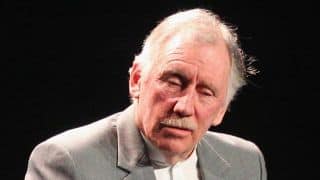