On August 13, 1982, Pakistan’s dashing opener Mohsin Khan brought up his first double ton against England at the holy shrine of the game, Lord’s. Prakash Govindasreenivasan looks back at the knock that laid the foundation for a resounding 10-wicket win for the visitors. 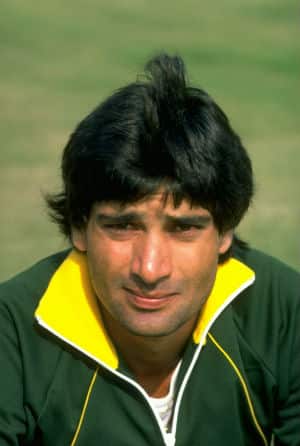 On August 13, 1982, Pakistan’s dashing opener Mohsin Khan brought up his first double ton against England at the holy shrine of the game, Lord’s. Prakash Govindasreenivasan looks back at the knock that laid the foundation for a resounding 10-wicket win for the visitors.

Imran Khan’s Pakistan did not have the best of starts to their tour of England in 1982. Despite breaking his back and picking up nine wickets in the match, his batsmen failed to apply themselves. Opener Mudassar Nazar suffered a golden pair and only Mansoor Akhtar managed to score a half-century as Pakistan squandered a chance to take a first innings lead after bowling out England for 271. On the penultimate day, Imran fought a losing battle with the bat as his gutsy knock of 65 couldn’t prevent the hosts from going 1-0 up in the three-match series with a 113-run victory.
Lead up to the Lord’s Test

Inspite of a 1-0 lead, the Englishmen had problems ahead of the second Test at Lord’s. Skipper Bob Willis failed the race against time to be fit for the second Test after he suffered a neck injury while trying to evade a bouncer from Imran in the first Test. David Gower took over the responsibility of leading the side in his absence. Robin Jackman was brought into the line-up in place of Willis, giving the former his first Test in England. Geoff Miller was unwell too, and was replaced by Derek Pringle.
Day One

Imran won the toss and decided to bat on what seemed pretty flat wicket at Lord’s. That along with a decline in England’s bowling attack helped Pakistan build. Mohsin Khan started the proceedings with a straight back drive off Ian Botham on the first ball of the game, and that was just the beginning. As the match progressed, both batsmen got rid of their helmets and seemed quite comfortable in the middle.

England struck to remove Nazar with the score at 53, but there was no stopping Mohsin. He played some exquisite strokes through the day. With the ball refusing to move in the air, Mohsin took his risks and lashed out at the deliveries outside the off-stump and got the desired boundaries. When he was bowled deliveries down the leg side, he would display his grace with a silken glance behind square.  Such was his rhythm early on that he brought up his half-century with a powerful square cut to stamp his authority over the English bowlers.

The 27-year-old scored heavily through the covers as the England bowlers offered him half-volleys all day long. Looking at Mohsin’s growing confidence with every stroke, it was hard to tell this man was just one Test century old before this knock. 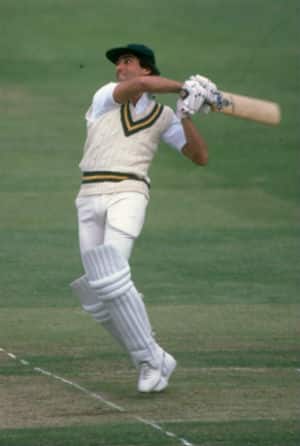 With the wicket not offering anything to the bowlers, Mohsin even took the aerial route on a couple of occasions © Getty Images

Pakistan took lunch at 109 for one with Mohsin going strong on from one end. When play resumed, Mohsin continued to display his repertoire of some of the most handsome strokes.  There was a fine glance to the fine leg boundary off Botham and a mighty square cut through covers off Pringle that defined his form on that day. A flick between mid-wicket and mid-on helped him collect a couple of runs and bring up his century as England fielders started to tire.

With the wicket not offering anything to the bowlers, Mohsin even took the aerial route on a couple of occasions. Mansoor Akhtar fell for a well-made half century and a partnership of 144 for the second wicket with Mohsin. Towards the end of the day, Mohsin was seeing the ball so well that he even danced down the track and picked up boundaries. Bowler Eddie Hemmings followed it up with a predictable short-pitched delivery and Mohsin was alert enough to go on his back-foot and late cut it to the third man boundary and bring up his 150. The day came to an end with Mohsin unbeaten on 159 and Pakistan on 295 for three.
The double ton

Mohsin carried forward his form to the second day, being touching distance away from becoming the first Pakistani player to score a double ton at Lord’s. After the new ball was taken, Mohsin’s green cap was replaced by a white helmet while his appetite for boundaries remained intact. He got going with a flowing cover drive and powerful pull off the same over from Pringle.

Botham dismissed Zaheer Abbas and Haroon Rasheed in quick succession, but their tormentor-in-chief surged on. With a single via a dab on the leg side, Mohsin brought up his double ton and was deservedly applauded by one and all at Lord’s, while the Englishmen on the field too went up to him to congratulate him on his feat. A couple of fans also made it to the centre of the field to give him a pat on the back for his achievement. It was the eighth double ton scored at Lord’s.

Mohsin was looking to continue his aggressive batting and tried to flick one past the square leg fielder but failed and had to depart at 200. He walked back to a standing ovation.

Pakistan posted a first innings total of 428 and bowled out England for just 227, with Abdul Qadir (four wickets), Sarfaraz Nawaz (three wickets), Imran Khan (two wickets) and Tahir Naqqash (one wicket) sharing the spoils. Imran enforced the follow-on and a splendid six-wicket haul for Nazar helped them bowl out the hosts cheaply again. With only 77 to get, England cruised to a 10-wicket win and squared the series 1-1.

Man of the Match: Mohsin Khan 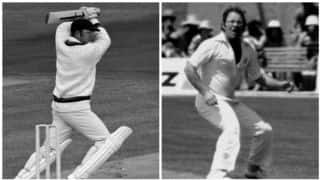 Eddie Barlow: One of the greatest all-rounders who was part of the lost generation of South African cricketers