Mominul Haque has the second highest average amongst batsmen with 500 runs in Tests.

With an amalgam of rock-solid technique and true grit, Bangladesh’s Mominul Haque is proving to be their dependable batsman in his short Test career. Even though, it was six years ago that he made his debut for Dhaka Division in Bangladesh’s First-Class cricket, he made his Test debut only in 2013 against Sri Lanka. In his very first Test itself, he essayed a fine half-century to show that he has the Test match temperament to come to the party in the bubbling cauldron of Test cricket. In the second Test of the series at Colombo (RPS) too, he gave a glimpse of his raw potential by compiling a fine knock of 64. It was an innings that he played in a low-scoring game as well.

But it was a few months later against New Zealand at Chittagong that Mominul took his game to another level with a tenacious knock of 181. The left-handed batsman played some eye-catching off-drives during that innings. New Zealand’s inexperienced spinners especially came in for some severe punishment from his rapier-like bat. Yes, he was troubled by the angle created by Trent Boult’s left-arm bowling and his ability to generate swing out of most tracks. It also has to be said that on tracks that tend to do a bit, he may not escape, if he continues to play those flashy drives with his blade outside the off-stump. However, the credit has to go to him for notching up a huge score on the board.

For batsmen to have scored at least 500 Test runs, Mominul’s average is second only to Don Bradman and ahead of the likes of Barry Richards and Cheteshwar Pujara

He followed up that resolute century with another one in the next Test match at Dhaka to show that his hundred at Chittagong wasn’t a fluke. He came into bat with New Zealand finding themselves in trouble, but he played as though his life depended on every ball that he faced, and made merry whenever there was a loose ball on offer. Most of New Zealand’s seamers had no clue, while bowling to the left-handed batsman.

Mominul also has a unique record with the second highest Test average amongst all batsmen in history who have completed 500 runs at the least. As on January 26, 2014, Mominul has scored 584 runs in five Tests with an average of 83.42. That is second only to Don Bradman’s 99.94. He is ahead of the likes of Barry Richards (72.57) and Cheteshwar Pujara (66.25). Mominul has two centuries and two half-centuries in his short span in Test cricket. Both his centuries have come against New Zealand and both his half-centuries have come against Sri Lanka — superior bowling attacks.

Surprisingly for someone who is known to play sparkling shots, his performances haven’t been up to the mark in One-Day Internationals (ODIs). His highest score in ODI format is only 38. He though, has time on his hands and more importantly, the game required to play the shorter versions.

Remember, Mominul Haque is just 22. He has a long career ahead of him. As years go by, he will be flagged down by some fine bowling in alien conditions and that is when he has to show that he can stand up like bedrock, and make a welcome return to form to continue to be a pillar of strength of the side. He will resume action against Sri Lanka in the two-match Test series against Sri Lanka at home starting on January 27, 2014. 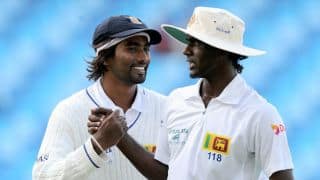