England managed to escape with a draw despite Australia dominating the match.

July 8, 2009. Allan Wilkins greeted with glee Cardiff’s maiden Test appearance, which also happened to be the first Ashes Test between England and Australia in 2009. The game threatened to be a dreary affair, till England almost obliged the Aussie chant for an encore of Adelaide 2006-07. Ankur Dhawan reminisces.

Ricky Ponting’s future as skipper hung by a slender thread. Australia had been on a gradual decline. A champion team that had maintained a win percentage in excess of 70 for about a decade had fallen off the radar following simultaneous retirements of the game’s crème de la crème. Australia had won just seven of their last 17 Tests.

England were afflicted with similar pangs of transition, but a passage of a slightly different disposition. The core of the team was young and had been together for a while, albeit unsuccessfully. Kevin Pietersen had just been stripped of captaincy, paving way for Andrew Strauss, who would go on to lead England to the summit of world Test rankings in two years time.

The series was to be remembered as Andrew Flintoff’s swansong. The architect of England’s monumental triumph in 2005, limped away from Test cricket on crutches after a masochistic ordeal.

Cardiff wasn’t his moment, however. The first Test belonged to likely heroes in atypical roles. James Anderson and Monty Panesar inscribed their names in the Hall of Fame for their dogged determination with the bat, in the final remnants of the match. But more on that later.

The Test can easily be segregated into two unequal parts. The leisurely pace of the first four days, harmoniously blended with the sedate atmosphere at Sophia Gardens. It was headed towards an imminent draw before England’s incorrigible knack to self-destruct surfaced as sudden as a comet’s flight.

Days One to Four:

Australia would have been the happier of the two teams at the conclusion of Day One. Although England maintained an uncharacteristically high run-rate, the tourists chipped away at the wickets, disallowing any collateral damage on a featherbed of a batting strip. At least three English batsmen were guilty of squandering promising half centuries, thereby nullifying the advantage of winning the toss on a placid surface.

The highlight of the day was Pietersen’s premeditated lap-sweep off Nathan Hauritz, which cost England his wicket at a critical juncture.With a predominantly leg-side field, the Aussies were needling Pietersen’s ego. Shockingly though, the aforesaid shot would have at best fetched a single. Instead the miscue cutely lobbed up to an obliging short-leg, who had ample scope to gobble it up. Pietersen departed for 69, a restrained innings for most part except that moment of insanity. Needless to say the media had a field day. England finished at a respectable 336 for 7. But at 228 for 3, the innings promised much more.

England recuperated on Day Two to surpass the psychological barrier of 400. They were aided by Australia’s impatience and an indomitable tail that would come to their rescue once more during the Test.

The remainder of Day Two and the following days were owned by Australia. An uninvited guest in the guise of rain, also gatecrashed the Cardiff Jamboree. As many as 53 overs were lost. Undeterred by scoreboard pressure or the fickle weather, Simon Katich and Ponting blunted the five-man English attack. Katich scored a typically tenacious 122, while Ponting a 150, plain and splendid as a balmy English summer.

The second-wicket stand yielded 239 runs at a rapid pace. But, as is customary with partnerships of such magnitude, one wicket often heralds a couple more. Katich was finally dismissed with Australia sitting smug at 299 for 2. Within 32 runs of his departure the tourists had been pegged back further with the wickets of Michael Hussey and Ponting.A throwback to Geoffrey Boycott’s profound observation; “always add two wickets to the score before assessing your position.”

Still 104 runs adrift, England got a sneak-peek into the possibility of a first innings lead. A fleeting glimpse is all it was though, as the trinity of Michael Clarke, Marcus North and Brad Haddin thwarted English hopes, adding 10 more than Graham Gooch’s highest Test score (333 vs India) between them. North and Haddin scored tons on Ashes debut while Clarke fell a whisker short of his first against England. Australia were in the ascendency with a lead of 239, when Ponting shut shop, late on Day Four.

While an Australian win wasn’t out of question, draw remained the number one contender. Except, England were worn to a frazzle, when they still had to negotiate 7 nerve-wracking overs before the curtains were drawn on Day Four.

The openers were discernibly diffident. They had barely found their moorings when Alastair Cook played all around a Mitchell Johnson thunderbolt, recognising his fate before the umpire raised the dreaded finger. Ravi Bopara didn’t fare much better, as he too was trapped LBW in the penultimate over of the day.

General consensus was that England should have sought the services of a night-watchman, rather than pawning their regular No. 3 but it was futile crying over spilt milk. In adversity, however, there was opportunity for the likes of Pietersen to make amends for their earlier indiscretion, come Day Five.

Cricket’s glorious uncertainties seldom fructify as romantically in the way the story unfolded at Cardiff on the final day. The match swung violently, as though undergoing an exorcism. The stars played musical chairs, fortunes fluctuated, both on the field and on Betfair.

It started with the noose tightening around England, already sweating and struggling on a leash by the end of Day Four. Pietersen was embarrassingly knocked over, oblivious of the fact that he held a bat in hand. Bowled and LBWs were to be the flavour of the day.

Strauss and Matt Prior discovered the perils of cutting too close to their body, on a fifth day pitch. Spin, largely reticent till then, finally found a voice in Hauritz twirling a web around the English skipper and wicketkeeper. England were reeling at 70 for 5 at this stage. It was futile glancing up at the heavens, Australia had forever to win, England needed to bat till the end of time.

Then, the rearguard action was engineered by two contrasting personalities from the north of England. Paul Collingwood was well acquainted with the soup England found themselves in. In the mould of Steve Waugh, Collingwood was steadfast in face of calamity. It was his comfort zone. He carried the English cause on his shoulders.

The rest simply played around him. Not to discredit any of them, they fought admirably. Flintoff battled an instinctive urge to throw bat at ball for 71 deliveries. He shared a partnership worth 57, worth far more if measured in time, as the duo killed 23 invaluable overs.

Stuart Broad’s lead feet withstood the off spin of Hauritz for over an hour. Graeme Swann was in his element, transferring the pressure back on the Aussies. He used the predatory field set by Australia to his advantage. It was amazing how a slight change in mindset made Ponting ponder his options. Australia, momentarily digressed from the “you miss, we hit strategy” that had worked so beautifully on a naturally inconsistent fifth day pitch. England were suddenly within arm’s length of Australia’s lead.

Such had been the yo-yo nature of the day, that presumption was a fatal mistake. Whether it was an ephemeral lapse in concentration on Collingwood’s part or a spell cast by Peter Siddle, but luck in the form of an airborne dab landed in the lap of Hussey at gully, who juggled and fumbled, holding on for dear life. Collingwood had been so resolute and disciplined in defence. What caused his downfall, remains one of those unresolved mysteries, like the Bermuda Triangle. England were 9 down for 233, Swann’s wicket had been a prelude.

The silence of the English contingent was deafening, it was the sound of their hopes evaporating into thin air. To add salt to their wounds, the war cry of “Aussie, Aussie, Aussie” resonated through Sophia Gardens like church bells. England’s streetfighter had fallen on the brink of safety and now with Anderson and Monty left to fend for themselves, defeat stared them in the face again. The longest one hour of their lives awaited them.

Time became a subjective phenomenon. It simply hung in limbo for England, while the Aussies felt deprived every ball England survived, it was never enough. Monty and Anderson celebrated trivialities such as consecutive dot balls. Slowly, the pair started taking themselves more seriously.

It was unfathomable how the last pair could be such a nuisance when the top order was a piece of cake. The deficit was erased with the most precious four runs Anderson will ever score. It meant not just that Australia were compelled to bat again, but that two overs were cancelled for innings change-over.

After a point they realised they were not alone. Messengers from the dressing room regularly invaded the field. Imaginative injuries were nursed, secret codes were passed, much to the chagrin of Ponting, who appeared resigned to the opportunity lost. When less than ten minutes remained, England breathed a sigh of relief.  The draw had been secured, which would go on to define a lot. Anderson and Monty felt knighted as they left the battleground, doused in honest sweat. England were indebted to them at the end of the series. 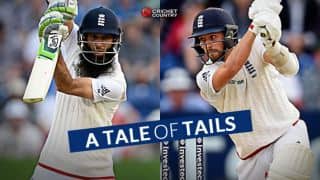