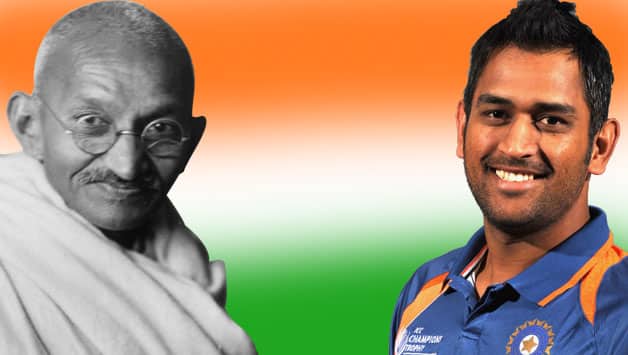 Mahendra Singh Dhoni, the Indian captain believes Mahatma Gandhi principles of honesty and non-violence are relevant in today’s world. October 2 is Gandhi’s birth anniversary and is celebrated in India as he is a revered figure who played a huge role in the country’s Independence movement. His teachings have not only influenced Indians, but also people from all over the globe. Thus it is no surprise that the Indian captain is one of them.

Dhoni spoke about Gandhi in a rare one-on-one chat with Sunandan Lele, an itinerant cricket writer.

Sunandan Lele (SL): Today is Gandhi Jayanti and we have a very special guest — Mahendra Singh Dhoni. Mahi, when was the first time you heard Mahatma Gandhi’s name?

MS Dhoni (MSD): It would be difficult for me to tell you when exactly I heard his name for the first time. I may have been about four years old. You find him in school books or in any educational institution. If you are born in India, Mahatma Gandhi is one name you first associate with independence, freedom, non-violence and honesty.

SL: If you see a person’s photo or a video, you create images in your mind. When you see Gandhi’s photo, what do you think?

MSD: Non-violence, honesty, perseverance, determination and to keep fighting. That means, if you believe in something and want to achieve it, you should go on. Gandhiji had that in him. So, when I think of him, all the words I said come to my mind.

SL: Many people gave their lives during the freedom struggle. What, according to you, was Gandhiji’s contribution to the cause for freedom?

MSD: He played an immense role no doubt. India had many leaders then, but if you had to pick the ultimate, it would be Gandhiji. The freedom struggle began in 1857 and we were successful in 1947. It was a process through those years which was handled by many people. Once Mahatma Gandhi came into the picture, He was like the ultimate leader and he had many others who also helped him. Then, we also have many people, whom we may not know by name, but they made a huge contribution. He wanted to do something, and had the support of thousands of people. They followed him and believed in his principles. India had confidence in him. They accepted what he said and supported him. If you look at most freedom struggles, there was violence. Mahatma Gandhi never believed in violence. To help a huge country gain Independence without violence is certainly a great achievement. He believed in his ideology and could convince people that independence can be won without violence.

SL: Mahatma Gandhi had a dream for India — unity in diversity. The Indian cricket team in some ways has that. Do feel a sense of pride because of that?

MSD: As an Indian, one feels proud of the unity in diversity. India has different castes, creeds and religions which follow different customs. In spite of that, we are like a unit and a developing country that is doing well in any field — be it economics, development or even sports. The contribution of every community is important in that regard. If you take the example of our team, we have players from different religions. They understand their roles and responsibilities. Ultimately it reflects. When you talk about a secular country where there is liberty, India leads the list. Cricket is followed in India and the team is responsible to spread the message as they are ambassadors. That makes us proud. We have to work as a team and make the country proud. It feels proud to be an Indian and try as much as possible to bring laurels to our country.

SL: You have played cricket all over the world. When you talk about India anywhere in the world, people mention Mahatma Gandhi. Have you seen that yourself?

MSD: Well, of course. If you have to pick two places then one is the United Kingdom and the other is South Africa — where Nelson Mandela is also revered. So, these are the two countries I have visited where Gandhiji is mentioned quite a lot. We do feel very proud. There are many places I am yet to visit. But all over the world Gandhiji is known along with Nelson Mandela and Mother Teresa.

SL: This is an important question. Are Gandhiji’s thoughts still relevant in today’s world? The world is certainly moving towards violence. Which principles of Gandhiji appeal to you the most?

MSD: There are many thoughts that appeal to me and I follow quite a few. One of them is that I focus on the present and don’t go too far into the future. What has happened is gone and I have no control over the future. As far as the present is concerned, I have 100 percent control over it. If I do my job at hand with all heart, it does impact the future. This was one of his main principles, I think.

Secondly, today’s world is very result oriented. For example, if you are a student, then only your marks are reflected to determine whether you are good. One of Gandhi’s principles was to give your full effort. If you are putting in everything and your preparation is good, you should accept any result. Full commitment is full victory. It is about the effort. We have seen it often in cricket as well. You do everything to prepare yourself, but you still lose. That doesn’t mean a team is bad or an individual isn’t up to the mark. Many times, the opposition plays better than you. That is when “full commitment is full victory” comes into the context.

In a team atmosphere, there may be honest disagreements. Take team selection for example. You can get confused as to which combination to play. You then consult the senior player or sometimes the juniors give you suggestions. If I choose an eleven as a captain, the others need not agree. There can be honest disagreements there. A player may tell a captain that another person can add more to a team. That is where we share opinions and it is important in a team environment.

SL: Fantastic. This means anyone can follow these principles. Thank you.

CLT20 2013: Rajasthan Royals have been impressive so far, but have to be cautious going ahead